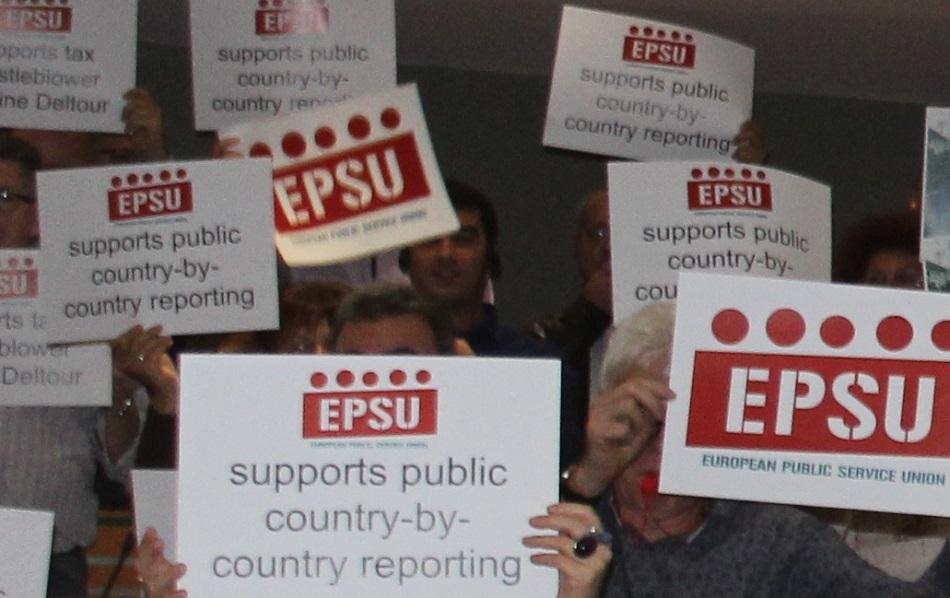 EPSU press release, Brussels, 5 July 2017 – embargoed until 15:00 -  Yesterday’s vote (4 July) in the European Parliament extends the EC proposal for public country-by-country reporting -CBCR- by large multinationals to all their operations worldwide, not just those in the EU.

However, an exemption, so-called “corporate get-out clause”, backed by the conservatives and liberals (PPE and ALDE), allows indefinitely the non-disclosure of information such as number of employees and subsidiaries,  tax paid, profits made, in operations outside the EU in case it is deemed commercially sensitive.

“As we called for, Parliament passed the requirement for global public CBCR. However, this hard-fought requirement is unlikely to pass the reality check. It smacks of naivety to believe that the corporate get out clause will not be misused to hide profits, assets made outside the EU on the ground that it may be commercially sensitive.” says EPSU Deputy General Secretary Penny Clarke.

As the amendment stands today, the exact scope of the get-out clause, who is to decide on the commercially sensitive nature of the information , for how long, for whose benefit, and according to which criteria remain rather unclear.

In the coming months, when Council discusses the EC amended directive, tax justice campaigners will have to fight hard to ensure that the principle of global public CBCR be upheld. Like for the banking sector, there should be no easy way out attached to it.

Governments will need to consider whether profitable multinationals can withdraw information as they see fit according to an unclear and much disputed notion of “commercial sensitivity” or whether workers’ trade union representatives, NGOs, journalists, members of parliaments, investors have a right to know the real economic activity of multinationals that operate in their territories.

Another demand to reduce the very high threshold above which the CBCR requirement would kick in has not passed (to reduce the annual turnover of €750 million down to € 40 million in line with EU definition of a large company), although it will be subject to EC review no later than 4 years after adoption of  the directive.

Note for editors : 6 reasons why tax administrations in Europe and beyond support public CBCR

We call on the economics and finance ministers of the European Union to crack down on corporate tax dodging; multinational companies must be required to publish key information about where they are do
Tax justice
All PoliciesAll Policies