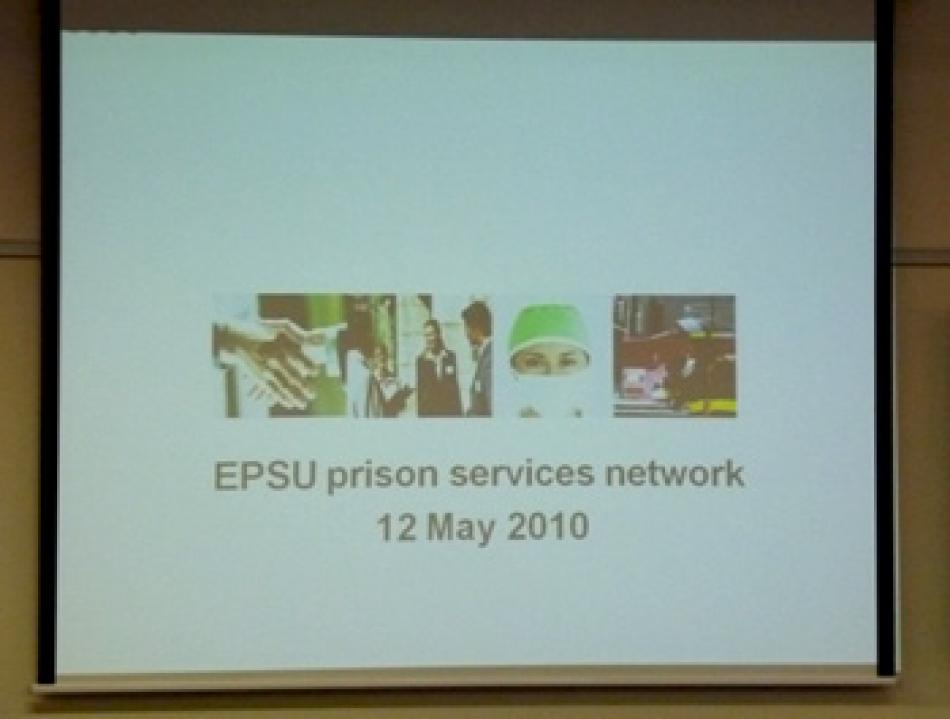 (Brussels 26 may 2010) At its meeting of 12 May, the EPSU prison services network discussed the complaint brought by the Union of Norwegian Correctional Services Employees, UNCSE-YS, to the Council of Europe against Norway’s correctional services for being in breach of the European Prison Rules.

The Council of Europe’s prison rules set out minimum standards on correctional services taking account of the needs of prison administrations, prisoners and prison personnel. They were last revised in 2006 and signed by 47 European governments, including Norway.

In Norway, prison officers must carry out 2 years’ initial training. However, UNCSE-YS is concerned by the increasing use of unqualified prison officers, representing today 1 out of 4 officers.

The estimated 500 unqualified officers are young, on the lowest pay grade of the state sector and far below the wages of qualified officers, have little or no access to vocational training and work overtime to make up for the low wages. They are not equipped to respond to challenging behaviours that can put their health and safety at risk as well as of other colleagues.

This situation leads to a two-tier workforce and poses a serious risk to maintaining high standards in the care of prisoners as required by the European Prison Rules.

In the absence of a response by the government, EPSU’s Norwegian affiliate is resorting to the Council of Europe. The complaint is currently being examined by the Committee for the Prevention of Torture and Inhuman or Degrading Treatment or Punishment.

To the knowledge of EPSU, it is the first time a trade union is using the European Prison rules on the ground of failing working conditions. It may well be a test case for other trade unions. Whilst not directly binding on governments, the rules are not only an important policy guide to maintain or reform standards in prison services, they have also been been used to back cases at the Strasbourg-based European Court of Human Rights.

The network agreed to send an EPSU letter of support to the Council of Europe, to monitor further developments and publicise the complaint with their respective governments.
At the meeting, the network also held an initial exchange of views with the European Commission on a pending green paper (consultation policy document) on detention conditions in EU prisons.

A report of the meeting will be available shortly.

1. All persons deprived of their liberty shall be treated with respect for their human
rights.

2. Persons deprived of their liberty retain all rights that are not lawfully taken away
by the decision sentencing them or remanding them in custody.

3. Restrictions placed on persons deprived of their liberty shall be the minimum
necessary and proportionate to the legitimate objective for which they are
imposed.

4. Prison conditions that infringe prisoners’ human rights are not justified by lack
of resources.

5. Life in prison shall approximate as closely as possible the positive aspects of life
in the community.

6. All detention shall be managed so as to facilitate the reintegration into free society
of persons who have been deprived of their liberty.

7 Co-operation with outside social services and the involvement of civil society in
the prison shall be encouraged.

8. Prison staff carry out an important public service and shall be recruited and trained
and have conditions of work that enable them to maintain high standards in their
care of prisoners.

9. All prisons shall be subject to regular governmental inspection and independent
monitoring.

Unions in the prison sector organised strike action on 15 November and plan further action from 24 November over jobs and working conditions. The unions are calling for negotiations over plans to shut facilities as well as over staffing levels and employment conditions. In general they are demanding a proper process of social dialogue in the sector. Read more at > CFDT (FR) [And at > Figaro news website (FR)-> http://www.lefigaro.fr/flash-actu/2010/11/15/97001-20101115FILWWW00453-greve-plusieurs-prisons-bloquees.php]
Jan. 26, 2015