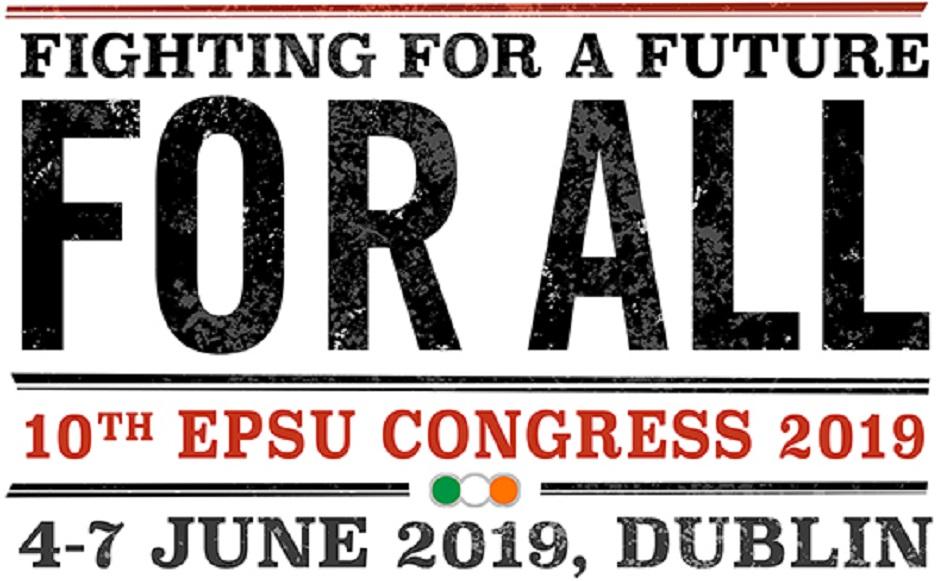 (Dublin, 4 June 2019 - Press Release) Dublin is to play host to over 550 trade unionists from across Europe for the 10th Congress of the European Public Services Union (EPSU) from tomorrow (4th June).

Over the course of a four day conference in the RDS, delegates will set out, discuss and put in place a programme of action for a fair future.

Held every five years, this year’s Congress will focus on the need for trade unions to embrace digitalisation, to continue to fight privatisation and to work in more collaborative ways to build solidarity and union power.

Speaking ahead of the conference in Dublin, EPSU Communications and Campaigns Officer, Pablo Sánchez Centellas said: “Digitalisation has the potential to positively transform public services and the jobs of public service workers. Quicker and easier access to services and increased participation of citizens can be combined with better quality jobs as repetitive work is replaced with more fulfilling tasks".

"New technology needs to be under democratic control. We have seen the impact on society of privatisation and PPPs. we need a societal control of our future".

“Another major topic is the fight for public ownership,” he added.

EPSU’s General Secretary, Jan Willem Goudriaan said: “We are fighting for a future for all. Public service unions are at the forefront to ensure a more democratic society, a society that cares for all. A precondition is more democracy at our workplaces, strong collective bargaining and qualified and decently paid public service workers".

“Our Congress will discuss how we grow the power of unions to give all workers in Europe a voice on the decisions that matter to us, our families and our communities.”

Fighting for a Future for All - EPSU supports Climate Change Protests

Friday starts a week of actions, strikes and other mobilizations to demand from our governments ambitious targets and concrete measures to address climate change.

Fight for 35 hours for all continues

(September 2016) Despite the national reform to revert to the 35-hour week across the public sector, trade unions are still having to fight to ensure all workers see their hours reduced from 40 a week. The STAL local government union organised a demonstration outside the Braga town hall on 19 September in protest at the mayor's decision to maintain the 40-hour week for workers employed by private contractors. The union plans further action if the local authority fails to implement the cut in hours. Meanwhile the SEP nurses' union is continuing its local actions around the country to secure the 35-hour week and other improvements in working conditions.

(11 December 2015 - Joint Press Release EPSU-CEMR) While digitalisation can foster more jobs, well-being and improve the lives of many citizens, it impacts directly the local and regional governments
Digitalisation
Local government
All PoliciesAll Policies