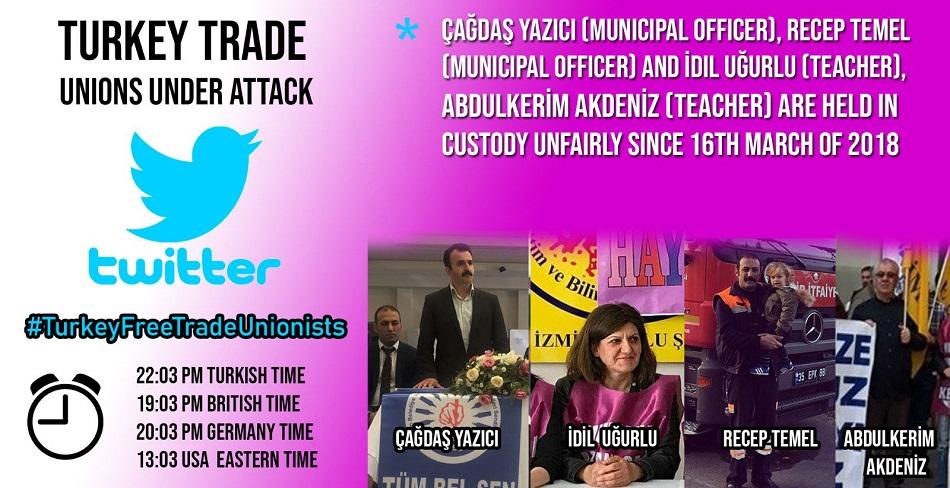 (26 March 2018) European and global unions raised the state of trade union rights in Turkey with the European Commission and Council ahead of their EU-Turkey summit 26 March in Varna, Bulgaria. The unions reiterate their concerns regarding the decrees, the state of emergency and arbitrary mass dismissals. We seek the release of detained and imprisoned trade unionists and other workers, the reinstatement of due process rights and the restoration of the right to freedom of speech.

The European Parliament adopted a resolution in February 2018. It raises “its deep concern at the ongoing deterioration in fundamental rights and freedoms and the rule of law in Turkey, and the lack of judicial independence.”

The UN published a report on Turkey 20 March 2018. It is a staggering list of violations of human rights. UN High Commissioner for Human Rights Zeid Ra’ad Al Hussein said: “The numbers are just staggering: nearly 160,000 people arrested during an 18-month state of emergency; 152,000 civil servants dismissed, many totally arbitrarily; teachers, judges and lawyers dismissed or prosecuted; journalists arrested, media outlets shut down and websites blocked – clearly the successive states of emergency declared in Turkey have been used to severely and arbitrarily curtail the human rights of a very large number of people.”

The UN Commissioner continued that those dismissed from their jobs lost their income, social benefits, medical insurance and even their homes, as various decrees stipulate that public servants “shall be evicted from publicly-owned houses or houses owned by a foundation in which they live within 15 days.” The report says “Since the stated purpose of the emergency regime was to restore the normal functioning of the democratic institutions, it is unclear how measures such as the eviction of families of civil servants from publicly-owned housing may contribute to this goal.”   We have reported several times that dismissed workers have no right of appeal and are blacklisted from other jobs, their passports removed. Five strikes were banned under the state of emergency in 2017. Turkey has not abandoned the state of emergency despite numerous calls.

Last month, EPSU and others protested against the arrest of members of the medical association who were detained for speaking out for peace. Also last month Ms Elif Cuhadar, Executive Committee member of the Turkish public service trade union confederation KESK and member of the ITUC Human and Trade Union Rights Committee, was arrested for statements she made during a panel discussion four years ago. Three trade unionists, Cagdas Yazici, Recep Temel and Idil Ugurlu of EPSU affiliated unions, were arrested in Izmir just last Saturday 18/3. Since our protest and the social media actions these unionists have been released.

It is against this background that  in the light of the EU-Turkey summit due to take place in Varna on 26 March, EPSU and the ITUC/ETUC urged the Commission, as well as the Council, to send a powerful message to the Turkish government condemning the upsurge in violations of fundamental rights and freedoms over recent months, pleading for a return to respect for the rule of law, democracy and justice and calling on Turkey, as an EU candidate country, to comply with European Charters and Conventions.

(4 June 2013) EPSU has expressed (see letter below) its concerns to the Turkish government over the reports of police violence and arrests of opponents of the government. People have the right to express their concerns and engage in protests and industrial action against government policy they
Union Rights
Jul. 22, 2016

(Press statement - 22 July 2016) EPSU condemns the attempted coup that took place in Turkey on Friday and Saturday 15 and 16 July 2016. Many courageous people took to the streets to defend democracy and stop the coup. Over 290 people are reportedly killed and close to 1500 wounded. Most of those who

Using the right to strike has been the way for workers to promote workers’ interests. Workers and our unions gained many rights and benefits we take for granted today. Holidays, and holiday pay. Sickness benefits. Unemployment insurance and minimum wages. Equal pay for women and men. Health and