Proposals to reform the labour code were published owin 31 August with some initial negative reactions from the trade unions. A common response was that the raft of reforms was being put forward before there had been a proper evaluation of the changes that have been implemented in the last four years. Unions expressed concern about rebalancing of the relationship between sector and company-level bargaining and changes to compensation in cases of redundancy. In small companies (less than 50 employees) it will be possible for employers to negotiate with non-trade union representatives and in companies with less than 300 employees existing committees dealing with health and safety and working conditions will be merged. The CGT confederation will maintain its opposition to the proposals with a day of action and strikes on 12 September. The CFDT expressed disappointment with what it saw as a missed opportunity to improve social dialogue while FO said it would need time to analyse the reforms and UNSA similarly said it would consult with members and work to amend the negative elements.

(September 2016) Trade unions are moblising on 10 September in their continuing campaign against the proposed new Labour Code. The President blocked the code over the summer and EPSU has sent a message of protest to the Lithuanian government arguing that the Code will do nothing for the economy and only create more precarious working conditions, particularly for young workers. Read more at LPPFS (LT).
Jun. 08, 2017
2017 June epsucob@NEWS 10

(June 2017) The three main confederations have expressed their concern over some of the elements of the new government's proposals for reforming labour law. The details won't be published until the end of June but already the unions have raised issues with plans to rebalance collective bargaiing towards the company level, reform workplace representation and reduce compensation for redundancy. They argue that they see little in the proposals to benefit workers and remain unconvinced that reducing employment protection will boost job creation. A process of consultation is planned for the summer period but the government aims to have the legislation place by September. 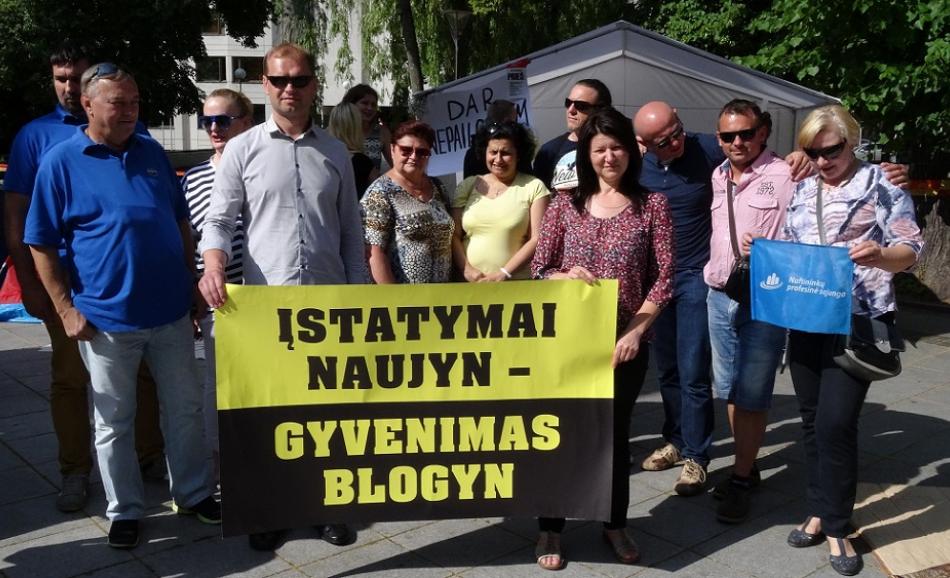 (30 June 2016) Young workers and trade unions are protesting against the changes in the Lithuanian Labour Code. The government introduced these changes to weaken the postion of trade unions.
Collective Bargaining
Solidarity
Union Rights
All PoliciesAll Policies