(26 October 2015 - EPSU/War on Want Statement to EU Finance Ministers) Ahead of the start of trialogue discussions on 27th October, the European Federation of Public Service Unions (EPSU) and UK campaign group War on Want call on EU Finance Ministers to take up the gauntlet thrown down by the European Parliament and include public country-by-country reporting (CBCR) by multinationals in the Shareholders’ Directive.

Last July, the European Parliament adopted by a large majority an amendment that would oblige multinational companies to publish CBCR on profits and losses before tax, taxes paid, public subsidies received, subsidiaries, number of employees and tax rulings for companies with an annual turnover of at least € 100 million.

It is not a request for new information since every company should know how much profit it makes and how much tax it pays. It is a matter of compiling this information in companies’ annual reports to shed light on where profits are made and where tax is paid.

Parliament’s amendment for an immediate extension of public CBCR across all sectors of the economy is a clear, concrete response to both European public opinion and EU governments that expect companies to pay tax where they generate profits.

Almost a year after the LuxLeaks scandal that exposed the industrial scale of corporate tax avoidance, there is no need to further delay corporate transparency as an essential step towards establishing tax fairness.

There is no reason why Council should wait for the Commission’s impact assessment on public CBCR to be completed in the first half of 2016 before taking an initiative. This delay will only help tax dodging. Public CBCR is already proving its worth in the banking sector which was subject to an overall positive EC impact assessment. It is our strong view that the small additional administrative cost for large profitable companies will be massively outweighed by the large tax returns for society.

Equally, we do not think that the EU can simply rely on the recently agreed OECD action plan against Base Erosion and Profit Shifting, which includes a CBCR framework, as it is narrower in its scope than Parliament’s proposed system, it has no provision for public disclosure, and is not legally binding.

This is why we strongly believe that the EU must now take the lead on a compulsory, open system of CBCR.

Despite claims by business spokespersons, public CBCR clearly has a place in the shareholders’ directive, as part of a broader goal of good corporate governance and corporate social responsibility.

The draft directive aims to enhance shareholders’ engagement and trust allowing to better identify share prices risk, safer investment and efficient pricing of multinationals. Public CBCR will precisely do this, providing informed knowledge about potential risks or opportunities to shareholders.

It also aims to tackle the disconnect between top directors’ pay and performance, which has caused outrage amongst shareholders and citizens who see no justification for such levels of remuneration, especially in times of severe social and economic crisis and unemployment. In some countries, CEOs’ pay has increased up to 94 % between 2006 and 2012. Pay inflation for the very few largely stems from unregulated, untransparent and untaxed profits as well as complex reporting of CEOs’ pay. Public CBCR will provide, in a simple format, information on profit and turnover and help inform decisions on pay.

CBCR is an essential tool for the tax inspectors that EPSU represents. It will help calculate misalignment and identify major tax risks, assess transfer pricing and other methods that artificially shift substantial income to lower tax countries or jurisdictions. It will reduce time-consuming detective work. In other words, it will allow tax authorities to do their job.

In practice, however, many tax administrations will not have the sufficient resources to process the information. As we have shown in ‘The Impact of Austerity on Tax Collection: One Year Later and Still Going Backwards’, EPSU report, 2014, instead of investing in tax administrations as part of coordinated efforts to crack down on tax dodging, most governments have done the opposite by reducing staff numbers across the EU by 10% on average since the beginning of the crisis.

To make CBCR work, tax administrations will need sufficient resources and will need much more political support than they currently have.

This is why CBCR information must go beyond the tax collectors’ offices so that the public can hold governments accountable on tax policy which in turn will help increase the political support tax employees need.

More generally, as members of civil society, we consider that tax fairness is a matter of general interest that overrides business confidentiality. It is only thanks to the public exposure of the industrial scale of corporate tax avoidance that public CBCR is on the EU agenda. In this regard, whistleblowers such as Antoine Deltour and investigative journalists should be praised and not punished for disclosing crucial information on how unfair the tax system has become.

As trade unions, making CBCR public is fully in line with corporate social responsibility and workers’ rights to information and consultation on business activities and restructuring as required in 2002/14 Directive.

Finally, public disclosure of CBCR is crucial for SMEs who face an unfair economic disadvantage compared to bigger companies which compete, not on an innovation agenda, but on a tax dumping agenda. Public CBCR will level the playing field between all companies regardless of the size or sector.

Last September, the consensus over public CBCR was reconfirmed as part of the Commission’s public consultation on corporate transparency. The majority of the 282 published responses support public CBCR and amongst them not-for-profit NGOs and trade unions call for the EU to take the lead.

There is now ample evidence of the financial impact of corporate tax evasion. In addition to reports by trade unions and civil society such as the Unhappy Meal on McDonald’s estimated €1 bn tax avoidance scheme in Europe, official estimates of global tax avoidance have at long last started to emerge. The IMF, estimates the cost of tax avoidance to be around 5% of current corporate tax revenues and almost 13 % in developing countries. According to conservative OECD estimates, revenue losses from corporate tax avoidance practices amount to USD100-240bn annually.
An agreement now on public country-by-country reporting across all sectors of the economy will be a major step in cracking down on these harmful tax practices that deprive public services of much needed resources.

We urge EU finance ministers to seize the opportunity of the shareholders’ rights directive as amended by Parliament, to show political will and stop allowing tax dumping in Europe.

Vote on the Shareholders' Rights Directive

(7 July 2015) In this July Plenary the European Parliament will discuss and vote on the Shareholders' Rights Directive.
Tax justice
Sep. 29, 2011 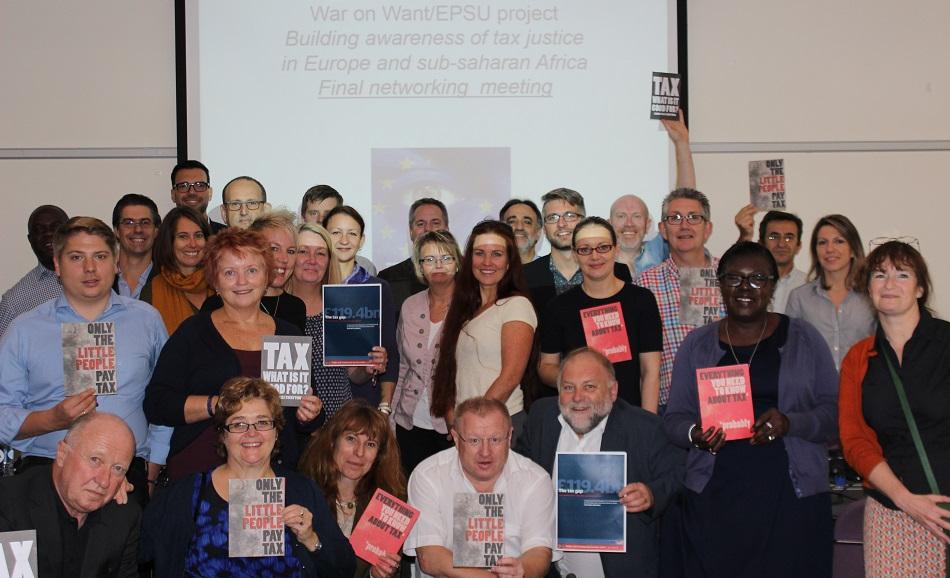 Workers in public administration at EPSU training on tax justice

The European Union is currently debating proposals to make corporate tax more transparent, making it clearer if a multinational is paying tax where it should be.
Central government
Tax justice
All PoliciesAll Policies