(12 January 2017) Over 120 participants from across Europe gathered in Brussels on 10-11 January to debate a wide range of issues related to the quality of employment – how to define it and what action to take to improve it.

In opening the conference, EPSU general secretary, Jan Willem Goudriaan welcomed recent positive developments, signalling that public sector unions in Italy, Ireland and Spain were returning to collective bargaining and recouping some of the pay and benefits lost under austerity measures. He also noted that the European institutions are taking up the issue of quality employment. The European Commission’s latest Annual Growth Survey, for example, makes two references to the importance of quality employment.

Jan Willem was adamant that ‘what we need now is to improve the quality of work. We need to ensure that public sector workers get a decent pay increase and ensure that past cuts to their salaries are restored. For this to occur we need an end to austerity and a restoration of collective bargaining’.

The conference sessions are summarised below with relevant presentations can be found at the bottom of the page.

Guy outlined the some of the key elements that go to make up quality employment, looking at various definitions and indicators that were being used at European and global levels. He suggested that developments at European level might be opening up more scope for trade unions to take the initiative on this in coming years (see below: Defining Quality Employment). Isabella underlined the well-being element of quality employment, stressing that this was an important issue for society as a whole and not just workers themselves. Agnieska emphasised the need to take account of all factors in assessing quality employment, noting that job security and good pay are not a guarantee of quality if workers suffer excessive workloads and stress.

There has been a wave of labour law reform across Eastern Europe and Anton provided an overview of developments noting the role of employer organisations and other commercial lobbyists as well as the European Union. While the reforms had generally produced negative outcomes for workers and trade unions there were some examples where unions had managed to defend their rights or were working hard to get some measures reversed.

Austerity measures have meant pay cuts and pay freezes for many public sector workers in recent years and participants reacted positively to news that the ETUC has declared 2017 “year of the pay rise”. Esther explained that the Confederation will be soon launch a major campaign calling for a pay rise for Europe’s workers, arguing that this would also support a fairer more sustainable recovery (see below: ETUC pay rise campaign).

Over the last year or so many EPSU affiliates had addressed various aspects of quality employment. Richard provided some examples covering working time, temporary and permanent work and rights to collective bargaining. He also noted some positive new agreements in the European sector social in EPSU’s sectors (see below: Quality Employment Developments).

Taking the example of the work of ver.di , Torsten examined how the union had campaigned to improve the pay and conditions of childcare workers. Noting that the union was continuing to work on this with an ultimate objective of getting this group of workers moved up the salary structure (see below: Improving pay in social care).

Cutbacks and staff shortages are placing immense pressure on prison staff in many countries with the result that they are facing stress and burnout and with inadequate staffing are more vulnerable to violence. Health workers too are under extreme pressure and the presentations from Adrian, Alberto and Mathias outlined the situation and some of the steps being taken to deal with the problem (see below: the three presentations and additional file on Workloads and staffing).

Francisco looked at the trends in precarious employment in the public sector in Spain, noting in particular the serious negative impact on health and safety, with workers not just facing job insecurity but also low pay and other poor working conditions (see below Job Security and Precarious Work in English and Spanish versions).

A recent European research project had produced some interesting examples of how unions were using social clauses in procurement and new approaches to social dialogue to secure better protection for workers against precarious employment conditions. Mat summarised the research and focused on case studies on home care in France and the UK (see below: Precarious work and social dialogue).

Facing a difficult negotiating environment during the period of austerity, Boris explained how his union had ensured that the government stuck by its commitment to increase pay as the economy recovered, using legal action, when necessary, to defend the collective agreement.

In his presentation on the challenges to achieve an effective social dialogue at European level, Peter underlined the need to achieve concrete results and called for better coordination between the ETUC and the European Trade Union Federations. He said it was important to put pressure on the European Commission to deliver on its commitment to support social dialogue at both national and European levels (see below: European Social Dialogue).

This conference was organised with the financial support of the European Commission. 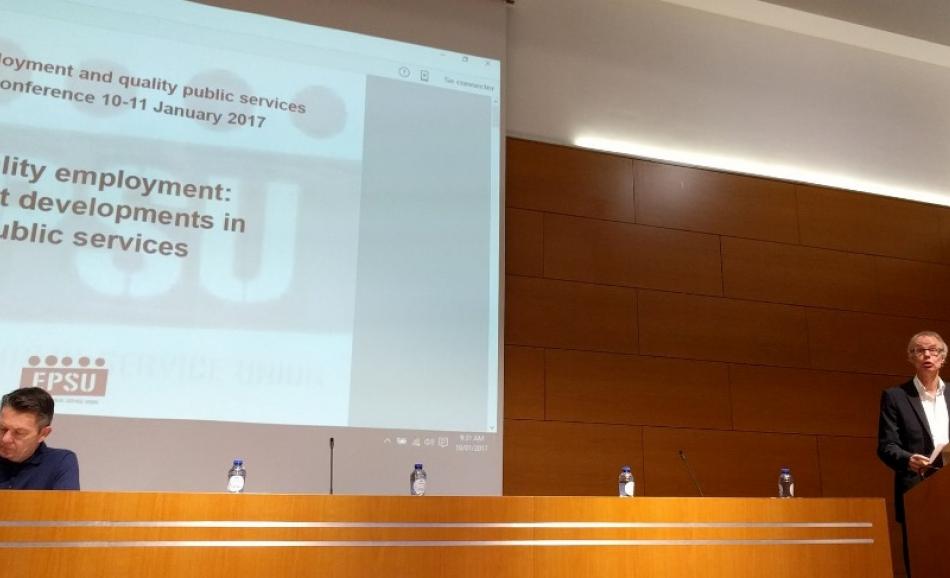 Conference to focus on pay trends, digitalisation and quality employment

EPSU is organising a conference on 6-7 June in Brussels that will explore a number of collective bargaining issues. Part of the conference will focus on quality employment and will discuss in particular research on quality employment in two sectors - prisons and childcare. Other sessions will debate new research commissioned by EPSU. This includes an updated analysis comparing pay trends in the public and private sectors; union action to tackle low pay in sectors dominated by women and the impact of digitalisation in home care and public employment services. There will also be a panel debating the prospects for quality employment for young workers.