"We are not elastic!" EPSU joins Belgian unions in national demonstration against Peeters law and austerity 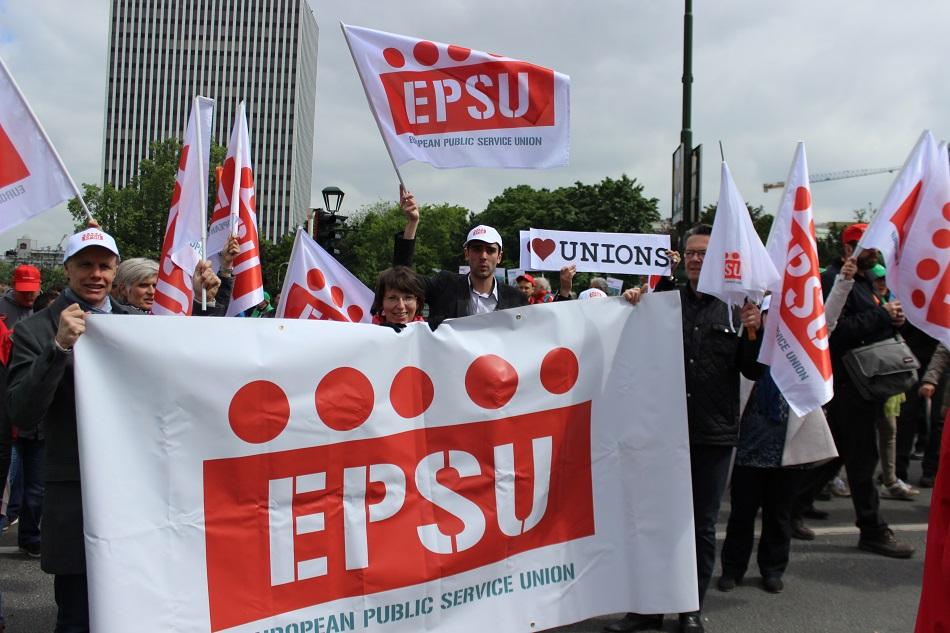 (24 May 2016) EPSU joined Belgian trade unions in a national demonstration today in Brussels, in defense of worker rights and the 38-hour working week. An estimated 50,000 trade unionists and demonstrators united in a rally beginning near the International Trade Union House. The so-called ‘Peeters  law,’ named after the minister for employment, will force workers to be more flexible and work longer hours. As workers under Belgian contracts, EPSU staff share the concerns of Belgian workers about the threats the Peeters law poses to the collective agreements that define our protections and working conditions.

Today’s demonstration was also a broader call for an end to the austerity measures and budget cuts that continue to be imposed on public services and their workers. EPSU brought a European message of solidarity.

The CGTP trade union confederation is organising demonstrations across the country on 16 February in protest at the austerity measures that are taking their toll on both public and private sectors. On 15 March the Frente Comum, bringing together a number of public sector unions, is organising a national demonstration outside the Ministry of Finance to protest against the impact of austerity on public sector workers and public services. Read more on the February demonstrations at > STAL (PT)And on the March demonstration at > STAL (PT)
Sep. 22, 2016
2016 September epsucob@NEWS 12

(September 2016) 29 September will see a national demonstration supported by the three main trade unoin confederations as part of their continuing campaign against the austerity measures imposed by the government. The confederations have jointly decided to cancel the planned general strike on 7 October until they have time to react to the delayed government budget in response to which further action may be called. Demonstrations at local and sectoral level are still likely to take place on that date.

Thousands of people joined the national protest in Lisbon on 19 March organised by the CGTP-IN confederation. The demonstration brought together unions from both public and private sectors. The unions will follow this up 1 April, National Youth Day, with action focusing in particular on youth unemployment.Read more at > STAL (PT)->http://www.stal.pt/index.php?option=com_content&task=view&id=629&Itemid=1 [And more at > CGTP-IN 9PT]
All PoliciesAll Policies