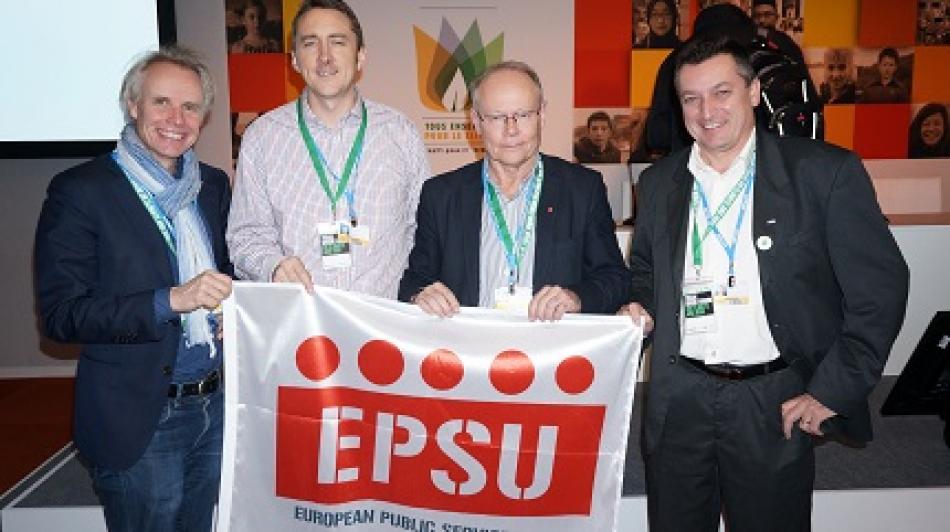 (14 December 2015) With 195 countries signing off on an agreement to address climate change, the Paris COP21 summit ended with a sense of relief. It shows a window on a world that cooperates to deal with global challenges. Our economies should run fossil fuel free by 2050.

EPSU General Secretary Jan Willem Goudriaan said "With an ambitious goal set at global level, policies and investment decisions should fall in line. This will have profound consequences for workers and our communities. We need Just transition roadmaps for our workplaces and for our communities to prepare for the changes so we leave no one behind."

The global agreement to address climate change was reached after several years of preparation and 2 weeks of negotiations. The main points:
- To hold the increase in global temperature average to well below 2 degrees Celsius above pre-industrial levels.
- To pursue efforts to limit the temperature increase to 1.5 degrees. Science indicates that this upper limit is needed to reduce the risk of the negative impacts of climate change. The small island states strongly want this to prevent that sea level rise washes away their countries
- While the agreement is binding, the national commitments are not. Therefore there is a review of the progress made every five years. The first review will be in 2020. Countries will come back to the table to increase their emissions reduction efforts.
- There are measurements and methods to hold nations accountable to carry through on their pledges
- And poorer countries will get support from the richer countries. This should assist to develop their economies based on low or even zero carbon emissions. It is also available to adapt to climate change and to cope with unavoidable loss and damage.

The trade union delegation was very active. We wanted to ensure that the impact of climate change as well as of the measures to address it on workers are recognised. This is now taken up in the preamble to the agreement. There were many governments opposed to make this more operational. The union side prefers more binding targets and strong review mechanisms. These are still too weak. Binding targets for the reduction of CO2 emissions leading towards 2050 are missing. We know this is a problem. The sum of the nationally determined contributions will lead to global warming of 3-4 degrees. It will result in disruptive weather patterns with more flooding and droughts.

EPSU representatives participated in various debates. Janne was on the panel of the Trade Unions for Energy Democracy (TUED) debate “Why Social Ownership and Democratic Control of Energy is essential in order to reach climate targets”. He argued the need to "support quality, decent jobs in the emerging green economy" while also ensuring "no one is left behind" as part of the transition to a sustainable economy. "Decisions taken over the heads of workers are not sustainable; decisions need to be taken with the workers who are at the heart of climate change proposals". He cited the important role social dialogue can play at the European level, with EPSU and their European Social Partners recently agreeing on a joint statement for COP21 which “committed to the development of skilling and reskilling program, the creation of quality jobs and a just transition” Public services and municipal companies play an important role to realise this.

Underlining EPSU's strong support for energy efficiency Matthew presented Unison’s Warm homes into the future proposal . The report outlines the importance of energy efficiency measures which can create both decent and quality green jobs while also tackling the twin issues of the environment and energy poverty. Colleague Dave Green from the Fire Brigades Union (FBU) in the UK outlined the immediate and increasing effect that climate change is having on his members. Despite more fires, floods and storms, as well as the consequences of droughts the firefighters are faced with more government cuts.

The impact of Europe's austerity policies was also addressed by the EPSU General Secretary. He took part in the ETUC panel discussion on “How to build a European low-carbon industry?”. We need a program of massive public investment in order to achieve a sustainable and just transition. “The money is there, but we need the political will to address this crisis” he added. The money is there. An estimated 1 trillion EUR is lost due to tax evasion, avoidance and fraud every year. He recalled the position of the EPSU Congress. "Climate Change is the single largest threat to current and future generations." EPSU said that we need a change of economic system, away from the profit-maximisation and growth at all costs that dominates. We are still a long way from this fundamental change.

Sharan Burrow of the ITUC said “Trade unions know that the road was never to Paris, but through Paris. Our resolve to manage a just transition in the face of the largest and most rapid industrial transformation in human history is stronger than ever.”

“Arising from the COP, unions will demand of their governments and employers the dialogue that will see a national plan for decarbonisation, clean energy and jobs – a plan that includes commitments to ensure a just transition for all.”

(Brussels, 28 November 2008) The global unions and including the ETUC has issued their demands for the International Climate Change negotiations taking place in Poznan, 2-11 December 2008.
Energy
Aug. 18, 2015

(18 August 2015) Trade unions have taken a simple view towards climate change: “There are no jobs on a dead planet”. So climate action is a trade union issue.
Environment/Climate Change
All PoliciesAll Policies