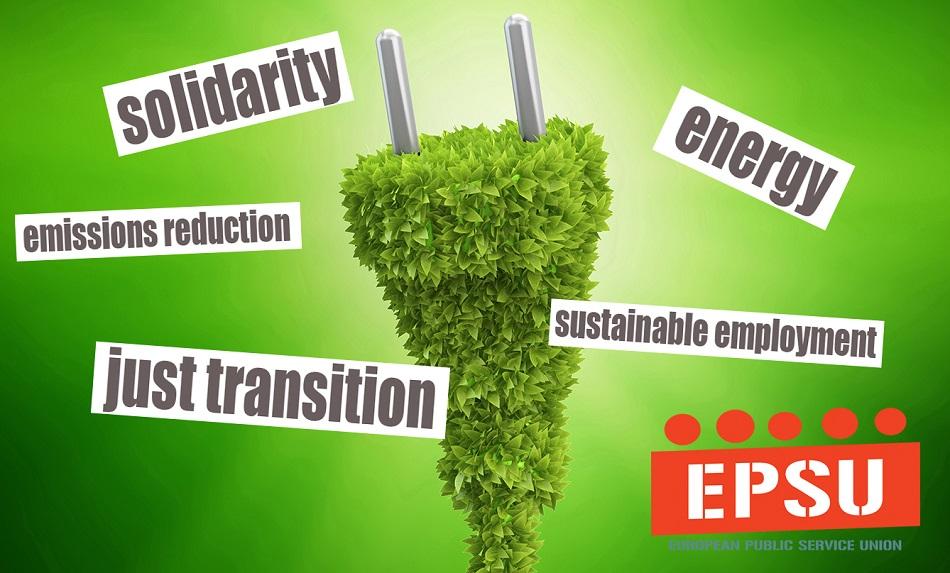 (3 December 2019) EPSU wants the EU’s energy ministers to commit to real change when they meet to discuss and debate the European Commission's energy policy priorities for 2019-2024, on 4 December. Against a background of European wide climate protests and COP25 in Madrid, where leaders are set to agree on the implementation of voluntary market mechanisms, this Council meeting will be decisive for the Union’s energy policy for the next five years. The upheavals in Chile before COP25 have shown us that social justice and the climate crisis are intrinsically linked. There have been numerous commendable overtures by the fledgling von der Leyen Commission. She will propose a European Green Deal with an expected commitment to just transition. For EPSU, addressing the climate and environmental emergency requires:

The market-based approach to energy has so far come at the expense of the planet and the millions of workers within the energy sector. It’s high time for the Commission to realise that involving workers, citizens, and local communities is essential to mitigating climate breakdown and to speeding up the transition toward a decarbonised economy. Adequate regulatory frameworks, as well as strong and well-financed public services, are key to mastering the challenges we face. Market-based solutions have shown their shortcomings: the sluggish deployment of renewable energies, the continual rise of carbon emissions, and millions of European inhabitants experiencing energy poverty. It is now urgent that we change the mindset of European decision-makers in order to ensure a just and green energy transition.

The EU took a clear commitment when endorsing the Paris Agreement. Carbon-neutrality and the protection of the biodiversity will require massive public investments. The Maastricht Convergence Criteria are outdated with regard to the climate and environmental emergency – as recently defined by the European Parliament. The mission letter sent by von der Leyen to Elisa Ferrara, the Portuguese Commissioner for Cohesion and Reforms underlined her role of monitoring and ensuring strict controls on public expenditure. This is a short-sighted ideological choice by the Commission which will prove detrimental for the just transition and the long-term health of our continent and planet. With interest rates at historic lows, governments have a unique opportunity to face the gargantuan task of decarbonising the European economy with cheap and easily accessible funds. The obsession with balanced budgets and surpluses will only provide us and the next generation with deteriorating infrastructure, underfunded public services, increased social exclusion, and leave vulnerable workers at the mercy of markets and multi-national corporations driven by profit.

An essential aspect of achieving decarbonisation is through public ownership, as private companies have continuously put profits before the general interest. Public ownership of the energy grid is especially crucial. This natural monopoly needs to be modern to ensure that renewable energy sources can feed into the grid and bring clean energy to all Europeans. In many countries, the grid needs to be updated to ensure sufficient access is available for energy that is produced from sustainable sources. Regrettably  private actors have once and again proven to be lethargic in their response to this.

The particularities of the Just Transition Fund will be unveiled later this month. The Commission has drawn €5 billion of the Just Transition Fund’s resources directly from existing Cohesion Funding. It’s essential to secure additional funding from the EU’s and Member States’ budgets and not only redistribute existing funds. A wide range of regions, up to 50 regions in 18 Member States, will be eligible to receive money under the Fund. While this will likely garner large support within the Council, the limited Fund will not be effective it is spread too thinly.

Many jobs will be created by the transition. Commission must ensure that these newly created jobs are of a high standard, and that workers have decent conditions and wages. The Commission must develop a comprehensive and holistic strategy for a just transition, ensuring the opportunity for upskilling and retraining of workers within industries which will be transformed in the transition to a decarbonised economy. Many regions in Europe remain completely reliant on heavily polluting industries and there must be opportunities for the people and workers in these regions, both during and after the transition.

Principle 20 of the European Pillar of Social Rights, proclaimed in November 2017, ensures everyone has the right to access essential services, including energy. This laudable (non-legally binding) principle has yet to deliver concrete benefits for the many European citizens who are living in a precarious energy situation or in energy poverty. It is not nearly enough to simply proclaim a right, it must be protected and enforced. In Ms von der Leyen’s term as Commission President, she and her College of Commissioners must take stronger action to tackle the growing problem of energy poverty in the form of a legally binding instrument which enshrines the right to energy and prohibits disconnections.

Further, the mission letter from President von der Leyen outlined the need for Commissioner Simson to focus on the energy efficiency of Europe’s housing stock and speeding up renovation rates to reduce consumption and fight energy poverty. Public investment and access to European funds will be essential so that the costs of this widespread retrofitting do not get passed on to those already in precarious living situations.

The European Green Deal cannot simply be an exercise in greenwashing. The European institutions and the Member State authorities must not follow the example set by the Spanish government in hosting COP25 to cover their dubious history of climate policies. In order to achieve decarbonisation in a just a fair manner for all, European and transnational solidarity is essential. A just transition is possible and within the European Union’s reach, but it is not guaranteed, and it is up to the Commission and the Member States whether they genuinely commit to achieving this. 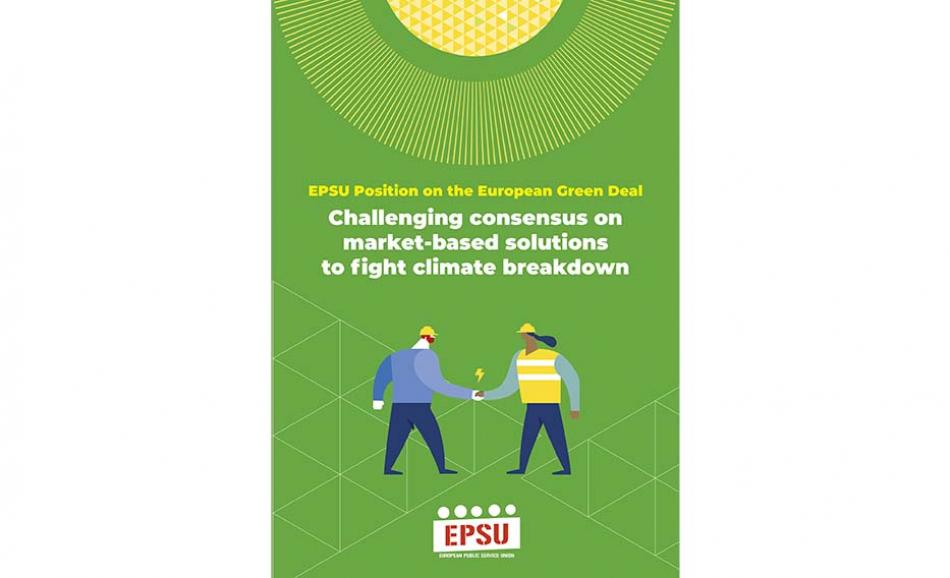 Challenging consensus on the use of market-based solutionsto fight climate breakdown. The European Federation of Public Service Unions (EPSU) welcomes the Green Deal proposed by the European Commission as a holistic response to the climate emergency.
Energy
Environment/Climate Change
Feb. 27, 2020 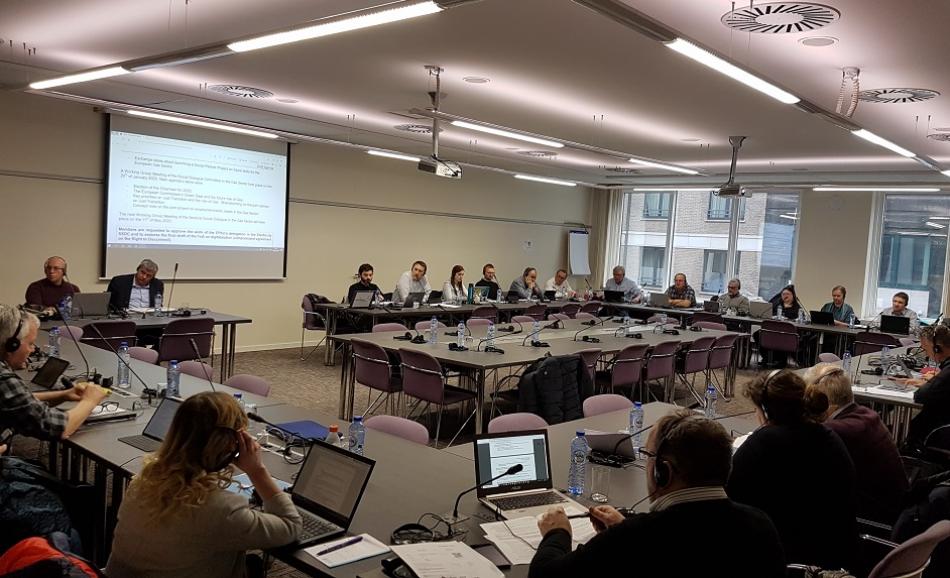 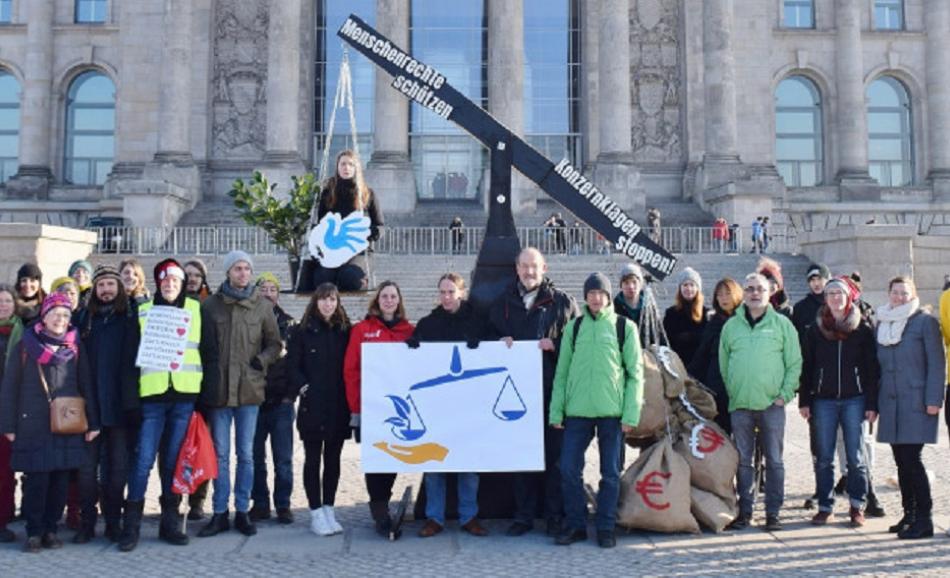