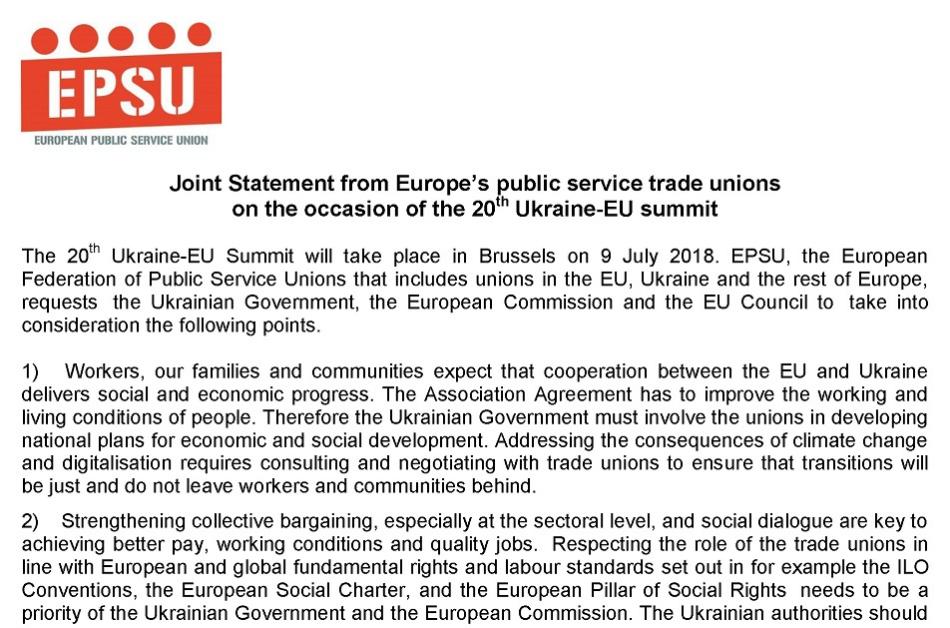 (9 July 2018) The 20th Ukraine-EU Summit takes place in Brussels today (9 July) to discuss the next steps in implement the EU-Ukraine Association Agreement that has been in effect since 2016. The European Federation of Public Service Unions (EPSU), that includes unions in the EU, Ukraine and the rest of Europe, has sent a letter to the European Commission, the European Council and the Ukrainian government with a series of demands criticising the agreement.

Unions demand that the Association Agreement has to improve the working and living conditions of people and argue that this will be very difficult unless trade unions are involved in the process which isn't the case at the moment. Today we see attacks on trade union organisations and violations of International Labour Organisation and EU standards.

EPSU maintains that public services should be kept in public hands and that the Ukrainian Government should not promote the privatisation of health and social care, municipal and other public services. The European Commission and the European and international financial institutions should stop putting pressure on Ukraine to privatise services. Similarly, EPSU argues that public-private partnerships (PPPs) should be avoided as they are very risky for public finance, as well as for service users and for workers as they put pressure on quality of services, jobs and working conditions.

Last but not least, EPSU also warns that the Deep and Comprehensive Free Trade Agreement between the EU and Ukraine lacks the necessary tools to ensure a fairer redistribution of the wealth that is generated from trade. Progressive taxation and corporate taxation should be part and parcel of a trade regime and included in future discussions between the EU and the Ukraine.

Using the right to strike has been the way for workers to promote workers’ interests. Workers and our unions gained many rights and benefits we take for granted today. Holidays, and holiday pay.
Collective Bargaining
Union Rights
Mar. 26, 2018 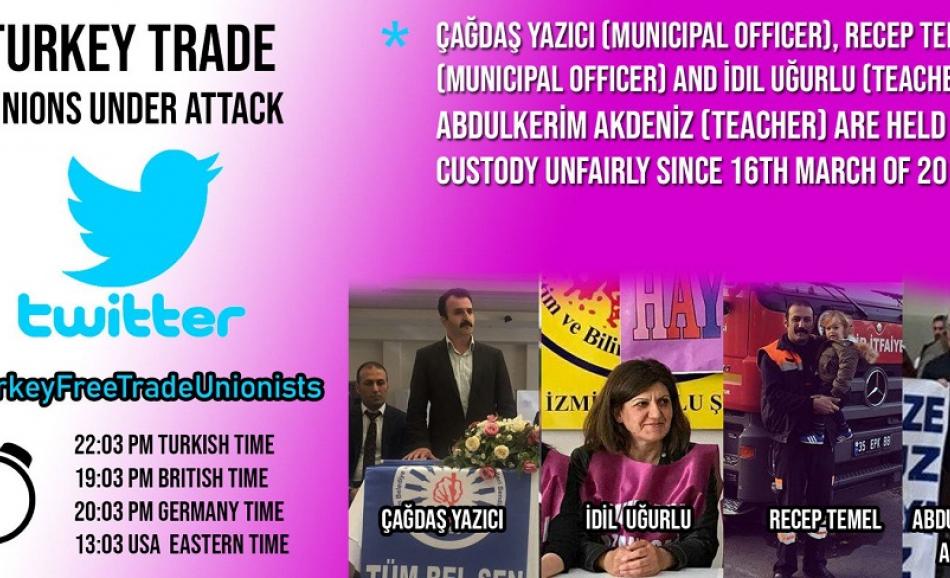 (Following the social media action and letters of protest, the unionists have been released) European and global unions raised the state of trade union rights in Turkey with the European Commission and Council ahead of their EU-Turkey summit 26 March in Varna, Bulgaria.
Solidarity
Union Rights
May. 16, 2019

On the eve of the elections the European federation of Public service workers has sent out letters to all spitzenkandidaten.
Economic Policy
Health
Health and Safety
Information & consultation
Migration
PPPs
Social Dialogue
Social Services
Tax justice
Trade
All PoliciesAll Policies