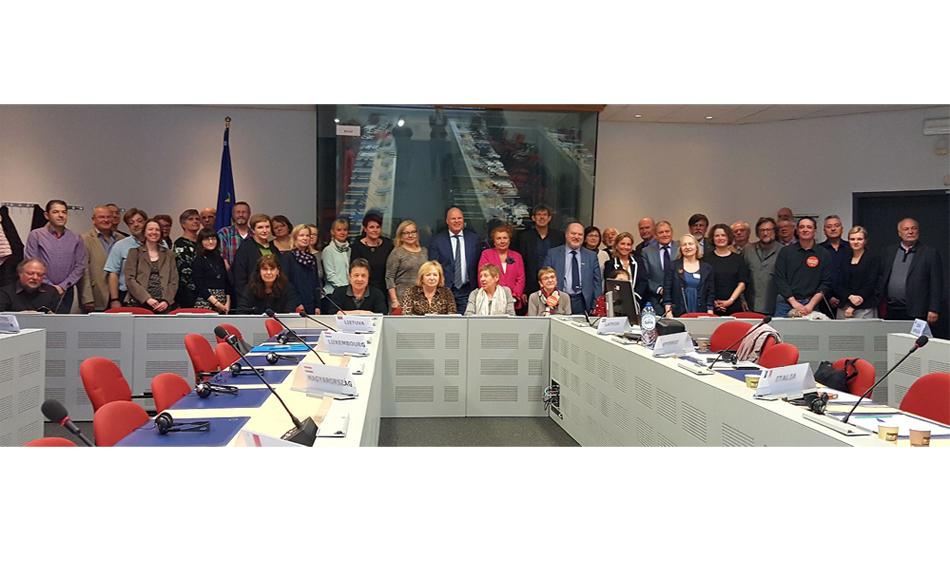 (8 April 2018) In their first meeting in 2018, the European sectoral social partners for the hospital/health care sector, EPSU and HOSPEEM, renewed their commitment to promote, guarantee and defend decent recruitment and working conditions for migrant workers, from the EU and from outside the EU, in hospitals and health care facilities across Europe. The participants looked back to the signing of the EPSU-HOSPEEM Code of Conduct on Ethical Cross-Border Recruitment and Retention on 8 April 2008, one day after World Health Day. This document is one of the first outcomes of the joint activities and initiatives in the context of the Sectoral Social Dialogue Sector in the Hospital Sector (SSDC HS).

EPSU and HOSPEEM issued a Joint Media Release at the occasion of this "10 years anniversary celebration” and for World Health Day 2018 (on 7 April). This Code of Conduct can be considered as an important instrument to support the free movement of workers within the EU while preventing unethical competition between Member States and employers in terms of the whole cross-country recruitment process, fair and transparent contracting and the induction of migrant workers at the new workplace. This also holds for their equal and non-discriminatory treatment with regard to labour law, social protection provisions and the access to training and career progression and the freedom of association. The EPSU-HOSPEEM Code of Conduct on Ethical Cross-Border Recruitment and Retention was inspired by social partner-based or public policy tools already in use in different EU MS. Non-binding in nature, two years after its endorsement, the World Health Organisation (WHO) on 21 May 2010 adopted and set into practice the WHO Global Code of Practice on the International Recruitment of Health Personnel, addressing a number of similar issues.

In the meeting on 4 April 2018, HOSPEEM and EPSU and their members respectively reiterated their commitment to the 12 key principles of their 2008 Code of Conduct (such as "equal access to training and career development", "fair and transparent contracting", "proper induction, housing and standards of living" and "equal rights and non-discrimination") and to the promotion of ethical recruitment and retention practices at European, national, regional and local level in the upcoming years, in their own work and in the context of initiatives of the European Pillar of Social Rights. EPSU General Secretary Jan Willem Goudriaan welcomed the constructive dialogue there has been with the European employers since the Code of Conduct. “We sought to ensure decent working conditions for all, to prevent the exploitation of migrant workers and to make sure public health systems are not undermined by unfair recruitment practices. Our Code was and is a significant contribution to achieve sustainable quality care for all.” Tjitte Alkema, Secretary General of HOSPEEM, reflected on the impact of the Code of Conduct: “10 years ago, our Code of Conduct was an inspiration for the work of the World Health Organisation. Nowadays, given the migration flows to and within the European Member States, it is still very relevant.”

At (and by e-mail after) the meeting on 4 April 2018 representatives of HOSPEEM members and EPSU affiliates commented on the use and positive effects of the EPSU-HOSPEEM Code of Conduct on Ethical Cross-Border Recruitment and Retention. There are different models how the 12 principles of the Code of Conduct have been incorporated in the different national contexts, either by legislation, by means of collective agreements and/or by using enterprise-based agreements.

Kate Ling, NHS Employers, United Kingdom, gave an overview on the use by the employers in the NHS and about the effects of the Code of Conduct in the United Kingdom, showcasing some good practice examples: “NHS organisations should only use recruitment agencies that comply with the Code, which includes guarantees to give overseas recruits good induction, training and employment protection. A key tenet of the UK Code is that recruitment of staff from abroad should not damage healthcare systems in developing countries. Active recruitment from developing countries shouldn’t take place unless there is a government-to-government agreement. For example, the UK and India have a scheme called Earn Learn and Return where staff from India can come to the UK to fill shortages in specialist areas, and in return they get the opportunity to gain specialist expertise and develop skills that they can then take back with them after they leave the UK to improve healthcare in India. So, both countries benefit.”

Kim Sunley and Susan Williams, Royal College of Nursing (RCN), United Kingdom, referred to the RCN Position Statement on International Recruitment, the updated RCN Guidance for Internationally Recruited Nurses (which gives an overview of the key considerations and principles for ensuring the ethical recruitment and employment of members of the nursing community from outside the UK; i.a. the Portuguese regulator translated it and has used for nurses considering coming to the UK), the RCN immigration service which offers support to members from overseas and the lobbying RCN has done to get nurses from the EU and the European Economic Area currently here the right to remain as part of Brexit negotiations. It is also important to underline that employers and trade unions have joined forced in the context of the so-called Cavendish Coalition. This group of 37 group of health and social care organisations - lead on the trade union side by UNISON (click here for more information on the UNISON campaign to organise, support and negotiate for EU workers) or the UNISON response to the Migration Advisory Committee (MAC)'s call for evidence in relation to the EU Exit - acts as a shared voice which influences and lobbies on post-EU referendum matters. It also provides those leading the negotiations on the Brexit with expertise and knowledge on the issues affecting the health and social care workforce.

EPSU and many of its affiliates have a long track record when it comes to the promotion, guarantee and defense of ethical recruitment and retention conditions for migrant health and social care workers since the CoC ERR was signed in 2008. A report elaborated by the University of Hertfordshire on behalf of EPSU, “Opportunities & Challenges Health Worker Migration in Europe”, in 2012 contained further data, evidence from the ground from countries with outflow and others with inflow of health professionals as well as recommendations and conclusions. EPSU also supported the "Health Workers for All Project" and co-signed the Call to Action, coordinated by WEMOS. It contributed with presentations by Romanian and German colleagues, from Sanitas and ver.di, to the final event in the EP on 5 May 2015. EPSU also made a contribution at the seminar "Cross-Border Healthcare in Europe: Promoting Equal Access to Quality Care" on 1 July 2015. On 28 January 2016 in Brussels, EPSU and HOSPEEM made a joint contribution to the DG HOME “European Dialogue on Skills and Migration”. At this event EPSU showcased the positive effect of government-to-government bilateral agreements, e.g. between the Philippines and Germany for the recruitment of registered nurses, and illustrated the role it German member ver.di has been playing in their elaboration and implementation, including of standard work contracts in line with the principles of the EPSU-HOSPEEM Code of Conduct on Ethical Cross-Border Recruitment and Retention. EPSU supports the PSI Campaign “No Recruitment Fees”, started in 2016.

Margret Steffen, President, EPSU Standing Committee "Health and Social Services", ver.di, Germany, underlines: "The agreement on the ethical recruitment and retention of workers has given us tailwind to demand the regulation of the labour market in the area of home care and to develop appropriate measures to achieve this objective. We also could ensure that migration and good working conditions have become an important issue in the debate on the need for and lack of qualified workers in health care in Germany." EPSU's German member ver.di is supporting the DGB Project "Fair Mobility" (in German: “Faire Mobilität”) that provides in DE, EN, BG, PL and ROM that assists in the enforcement of fair wages and working conditions for migrant workers from Central and Eastern European (CEE) countries on the German labour market. In 2014, EPSU, in a joint statement with the German and Spanish health and social services trade unions ver.di, UGT and CC.OO, stressed their determination in the fight against rogue employers that take advantage of health workers. A recent example is how a Berlin-based care company exploited Spanish nurses and offered lower pay and conditions than those stipulated by the collective agreement. In 2016 ver.di co-issued a documentation on the experiences of 50 years of recruitment of nurses from South Korea (also see the documentation of a seminar organised last year in DE). In 2017, ver.di contributed to the elaboration of the policy statement "Brain Drain and International Recruitment of Health Workers" - available in DE and EN - by the "German Platform for Global Health". Ver.di is also lobbying and campaigning for decent working conditions and fair contractual arrangements for the as a rule female and often migrant workers from Central and Eastern Europe providing (basic) care and supporting services for frail elderly people or persons with a disability in private households, not least in the context of efforts to set up a regulatory and policy framework to prevent and overcome black labour for this group of workers providing important contirbutions for our societies. On 3 May 2016 the Board of the German Trade Union Confederation (DGB) endorsed these and other demands.

HOSPEEM has also published an article on the event and the 10 year anniversary celebration.

- EPSU-HOSPEEM code of conduct and follow up on Ethical Cross-Border Recruitment and Retention in the Hospital Sector
Social Dialogue
Jun. 28, 2011