Standing up for a pay rise for public service workers in Europe – Poland, France… 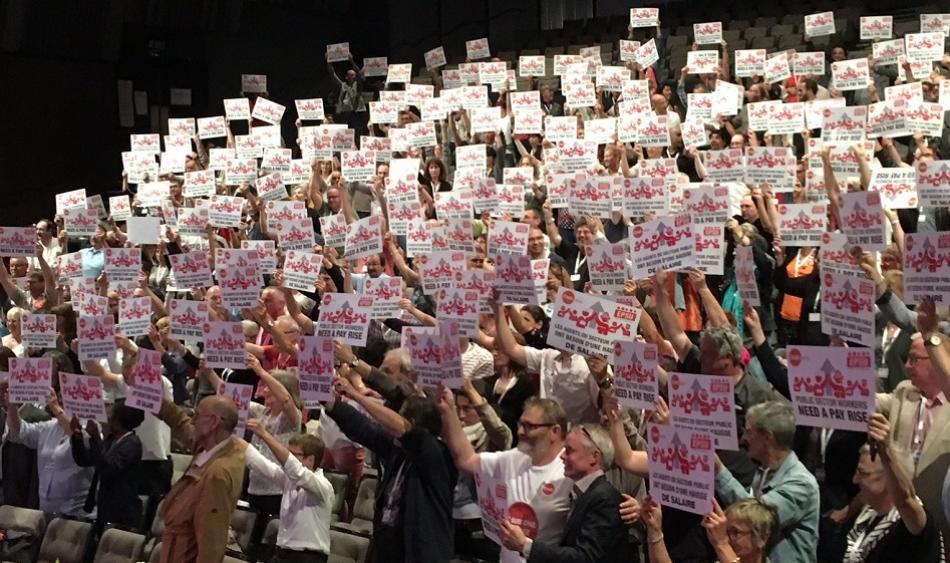 (29 June 2017) Referring to the proud history of the actions of the Polish trade union of nurses and midwives, EPSU General Secretary supported the union’s continued demand for decent pay and conditions at the 20 years anniversary of OZZPiP of the confederation Forum. The union pioneered many innovative actions like a white village to pressure the minister of finance to make more funding available for pay and jobs. Tents were set up in front of the ministry for over a month before he caved in. The union is now fighting for better staff patient ratios and effective and mandatory staffing levels in a battle many unions are engaged in across Europe. Lack of staff undermines workers’ health and safety leading to more stress, fatique and illness. This has negative effects on the quality of care of patients. Nurses were recounting how many trained and qualified nurses were leaving the profession as pay and conditions are better in other sectors in Poland. The union decided to join the European trade union family strengthening the voice of nurses and midwives in Poland and in Europe.

The EPSU representative used the occasion to meet with the Presidents of several public service unions in particular discussing the disastrous situation in the Polish social security administration ZUS. Management wants workers to work much more overtime, people are leaving, stress and burn-outs are common. The new Polish government has turned back previous decisions regarding the pension age. This has been welcomed. In practical terms it will lead to around 300.000 applications for pension in October leaving an already stressed system on the brink of collapse. No additional resources are allocated. Salaries are not increased to allow for the overtime payments. Wages are among the lowest in Poland. 98% of staff are women.  The union is planning further actions in a hostile climate. Meetings took place 26 June in Warsaw.

The General Secretary further attended the Congress of EPSU affiliate Interco-CFDT. What to expect for public service workers from the new French government was discussed in its meeting. The union considered its policies and demands in two round tables focusing on the future of the public service in France. How to address challenges of digitalization, to relate to decentralization and what role for the social dialogue. EPSU’s Nadja Salson participated underlining the links between the European and national level. She demanded the European Commission to implement the agreement reached in the European social dialogue on information and consultation rights for public service workers. They are currently excluded from these rights.

The EPSU General Secretary addressed Congress underlining the need for change in Europe and the positive agenda of the unions for social rights, investment in public services, addressing tax avoidance and demanding progressive trade. The Congress delegates participated in a photo action to underline their support for a pay increase for public service workers in France and elsewhere. During the Congress workers in a local public elderly care home in Brest staged a demonstration and announced a strike action. The main issue for the elderly care workers was the lack of staff, leading to stress and burnout. The General Secretary expressed our solidarity with the workers and our common struggle.

This Congress was the occasion to say goodbye to Stelios Tsiakkaros, vice-president of the EPSU NEA committee and European, global affairs in CFDT-Interco. The EPSU General Secretary thanked him for his contributions to the work of the Federation. Stelios retires. Other delegates at Congress included the PSI General Secretary, and representatives from unions in Belgium, Cyprus, Israel, Palestine, Portugal, Tunisia, Spain. The meetings took place 27-28 June 2017, Brest.

Public service unions bargaining for better pay across Europe A pay rise for public service workers across Europe is the message that EPSU has sent out today – 23rd June – Public Services Day. Supported by the European Trade Union Confederation and in cooperation with the ETUCE teachers' federation, EPSU has highlighted some of the countries where public service workers continue to suffer from the effects of pay cuts and pay freezes. This special issue of EPSU's Collective Bargaining newsletter reports on some of the latest developments in pay negotiations and affiliates' campaigns, protests and other actions in support of those negotiations. Ireland: Public service workers suffered significant pay cuts in 2009 and 2010 with take-home pay also affected by a pensions levy. Unions are in the process of considering and consulting over a potential three-year pay deal which, if agreed, would mean a significant step towards pay restoration. The positions of the various unions can be seen at IMPACT, SIPTU, INMO, PSEU, CPSU and AHCPS. Czech Republic: The OSZPS health and social care union launched a campaign earlier this year exposing the pressing problem of low pay and overwork, with many workers leaving for better paid jobs in other sectors or other countries. The union has negotiated pay increases and new pay arrangements which will provide pay increases of between 9% and 23.5%. The highest increases will go to the lowest paid, following the abolition of the lowest three pay grades in the pay scale. UK: Public sector unions have been pressing for some time for an end to the 1% cap on public sector pay. This, combined with earlier pay freezes, has meant a major loss of purchasing power. Local government workers in Scotland are currently balloting over industrial action while in England and Wales they have launched their pay claim for 2018. Health workers are also angry over pay restraint and civil servants have seen their pay progression blocked as well as pay frozen. Latest updates can be found at: UNISON, Unite, GMB, RCN and PCS. Spain: The main federations in the public sector, FSC-CCOO and FeSP-UGT, are mobilising around the country to secure a pay rise and other changes to employment conditions to restore cuts implemented since 2010. The most recent action was in Valladolid. Meanwhile, both federations are also supporting protests and strike action around the world to improve pay for the thousands of workers in embassies, consuls and other bodies. More information on the action in public administration can be read at FSC and FeSP while updates on the international campaigns can be found here and here. Belgium: The non-profit/social profit sector is a major employer in Belgium and covers a wide range of health and social services. Unions have been campaigning and negotiating for some time to secure improvements to pay, hours and to increase employment in a sector facing major pressures from overwork. The latest action took place at the beginning of June and while some concessions have been made the unions say they are still a long way from achieving their key demands. Read more at CSC-CNE/LBC-NVK, CGSP/ABVV and CGSLB/ACLVB. Austria: The two main unions in the private health and social services sector, vida and GPA-djp, have been negotiating and campaigning for higher minimum wages in their sector agreements. They are aiming for all sector agreements to have a minimum of at least EUR 1500 and then going for higher targets as this minimum is achieved. Further information can be read at vida and GPA-djp. Netherlands: The FNV trade union has just negotiated a new 27-month deal covering 55000 workers in welfare and social services. There will be a 3.65% increase in pay over the course of the agreement and a one-off payment worth 0.5% in January 2019. There are also provisions to deal with increasing work pressure. For further details check FNV. There are plenty more reports on recent pay settlements on EPSU's website. Here you'll find updates on some of the main bargaining outcomes in Denmark, Germany, Italy, Norway, Slovakia, Sweden and Turkey and further updates from Austria, Ireland and the Netherlands. And there's lots of other bargaining news that can be searched by sector, subject and country.
Sep. 14, 2018
2018 September epsucob@NEWS 18

We will celebrate Public Services Day on the 23rd of June, when we all recognise and honour all those in public services who make such a valuable contribution to all of our lives.