Government leaders and others are meeting at the climate summit in Glasgow to make pledges to reduce CO2 and methane emissions. This is vitally important. Scientists say that the national action plans are not enough to meet the goal of limiting global warming to 2 degrees (let alone 1.5 degree) by the end of the century and that we are on a path to 3 degrees. Reports, research, and actual experience point to the catastrophes this will cause. This will result in our planet’s eco-systems being completely out of balance, causing havoc to agriculture, workplaces and our communities.

This poses major challenges for workers and our unions as industries, like coal-fired electricity, that produce large CO2 emissions will have to transform production processes or close. The time in which to do this is short. The money that is available to support the change is limited, with funds to assist workers with finding new jobs and retraining often even less. Towns and regions relying on those industries will be impacted. The challenge for developing countries is even bigger, as they legitimately aspire to western lifestyles. So rich countries need even deeper and faster change to allow others to grow.  To confront this, we need not so much a transition but a transformation of our societies, away from the obsession with markets, profit-maximisation, and the ignoring of externalities that have led to the exploitation of our natural environment.  There are alternatives and EPSU is supporting the work of the Trade Unions for Energy Democracy to build a programme in favour of public decarbonised energy.  Transformation also means valuing our public services and public service workers, both crucial to achieve a world more focused on the needs of people than on the needs of the 1%. An EPSU delegation will join the demonstration on Saturday in Glasgow.

The European Commission published its proposals for an adequate minimum wages earlier this year. Working groups of the European Council (Member States) have been discussing it and there will be a vote on a crucial report in the European Parliament on 11 November. The proposals of the EP rapporteurs go a long way to improve the directive and make it a useful instrument to strengthen the setting of minimum wages and address the declining rate of collective bargaining coverage. Employers, led by BusinessEurope are fighting tooth and nail to keep workers on poverty wages. Those same employers are also weakening collective bargaining in Europe and have members that engage in union-busting. The French multinational long-term care provider ORPEA was again convicted in a court in Germany in early October after it had sought to harass members of the works council.

Workers are fighting for better pay and changes to our economic system across Europe. The waste workers of Glasgow went on strike as the COP26 summit started because the city council has ignored demands for better pay and conditions. Italian refuse collectors will strike on 8 November in protest at attempts by employers to make work more flexible and precarious. Slovak public sector workers are demanding pay increases while the employer is offering zero growth and both Dutch local government and German regional government workers are engaging in actions in response to employer attempts to freeze pay. The applause for public services has died down and the heroes of the pandemic are forgotten. During the action day for care workers on 29 October we revealed that over the course of two years nearly 420,000 workers have voted with their feet and left the sector. That is the consequence of our employers not addressing the problems.  We support all actions. Public service workers deserve higher pay and better conditions. 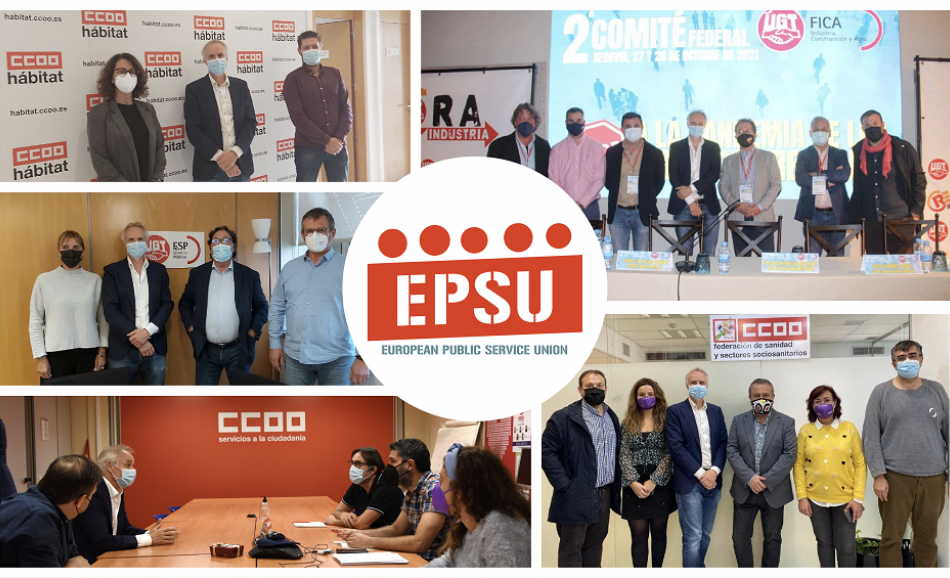 On 26-27 October the General Secretary of the European Federation of Public Service Unions (EPSU), Jan Willem Goudriaan, visited Madrid to meet with the leadership of the affiliated organisations in Spain.
Nov. 04, 2021 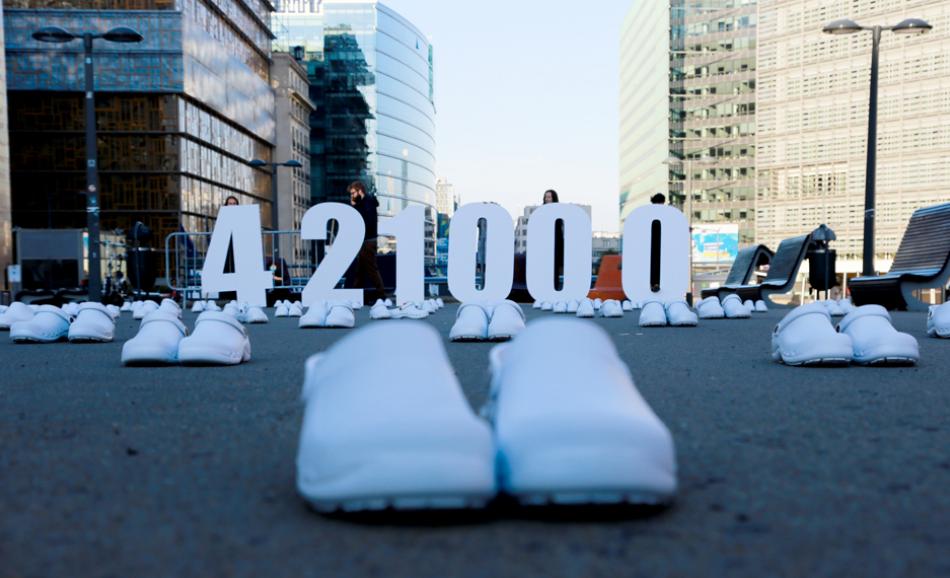 EPSU celebrates Global Day for Care with a splash

EPSU marked the Global Day of Action for Care Workers with a symbolic action in front of the European Parliament and a series of events.
COVID-19
Health
Social Services
Nov. 03, 2021 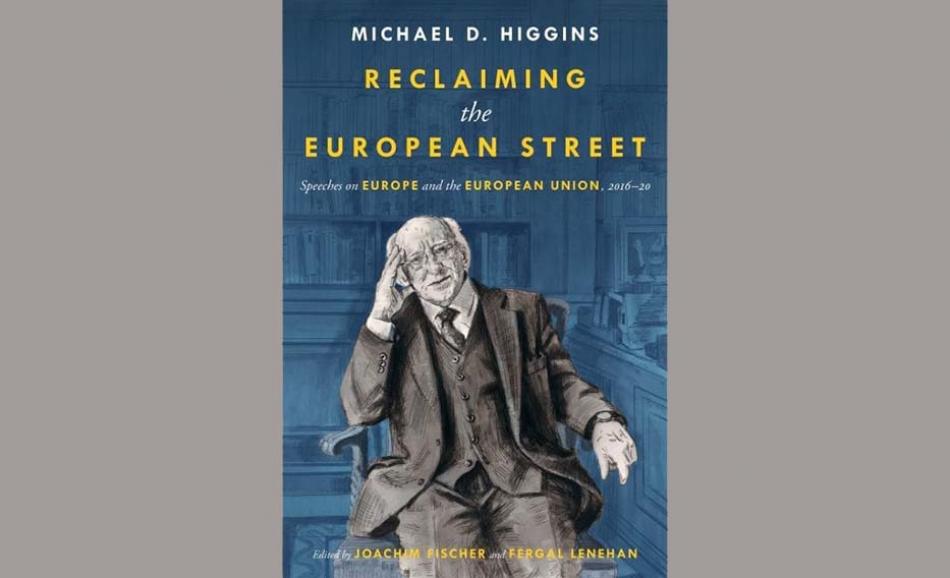 One of the highlights of the EPSU congress was the speech of the President of Ireland, Michael D Higgins. With a wide-ranging overview of the challenges facing Europe’s trade unions.
Oct. 28, 2021 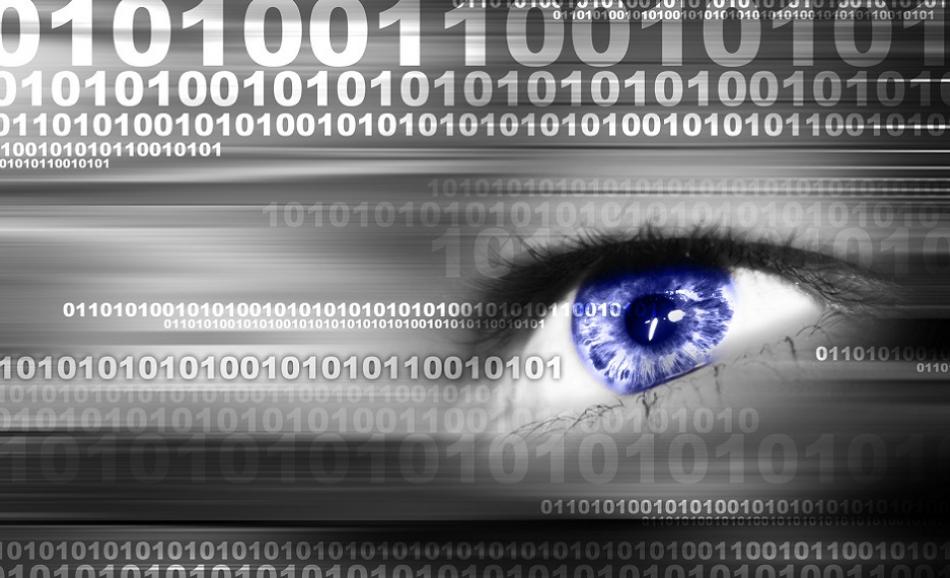 The German Union Verdi with the support of EPSU is organizing an online talk about digital platforms.
Digitalisation
Oct. 27, 2021 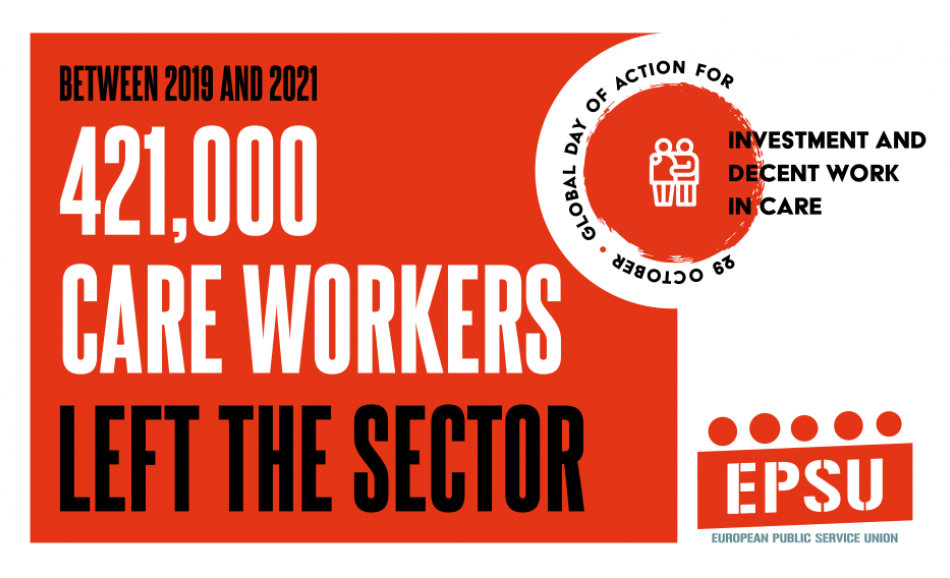 A new report published today by EPSU (European Federation of Public Service Unions) shows that, as the pandemic was at its peak, hundreds of thousands of care workers were abandoning the sector of long-term residential care.
Social Services
Oct. 26, 2021

The pharmaceutical strategy for Europe - part 2

EPSU welcomed the Pharmaceutical Strategy for Europe and expressed the need to strengthen public research and public companies to deliver quality, affordable and accessible medicines available for all.
Economic Policy
Health
Oct. 21, 2021 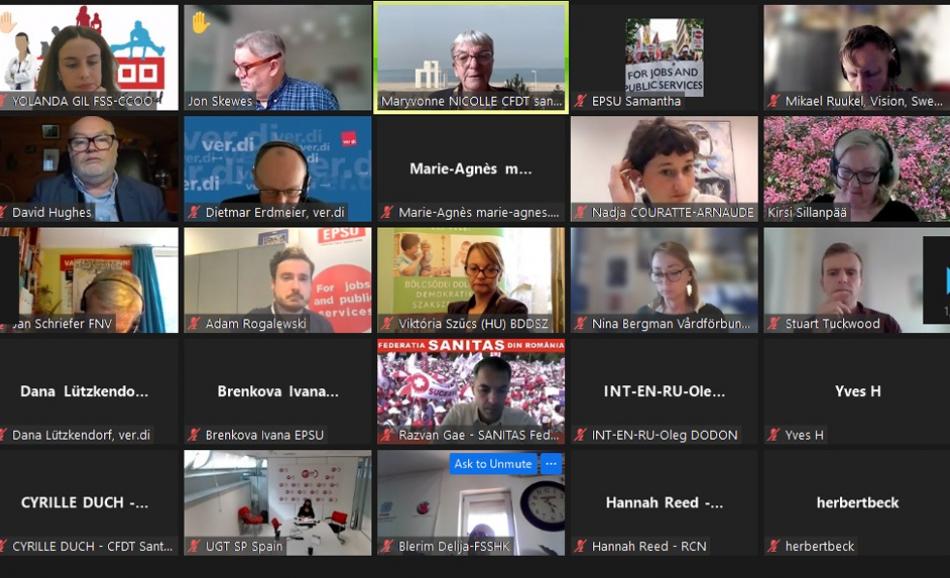 The unions affiliated to EPSU working on health and social services met online on the 19th of October 2021.
COVID-19
Health
Social Services