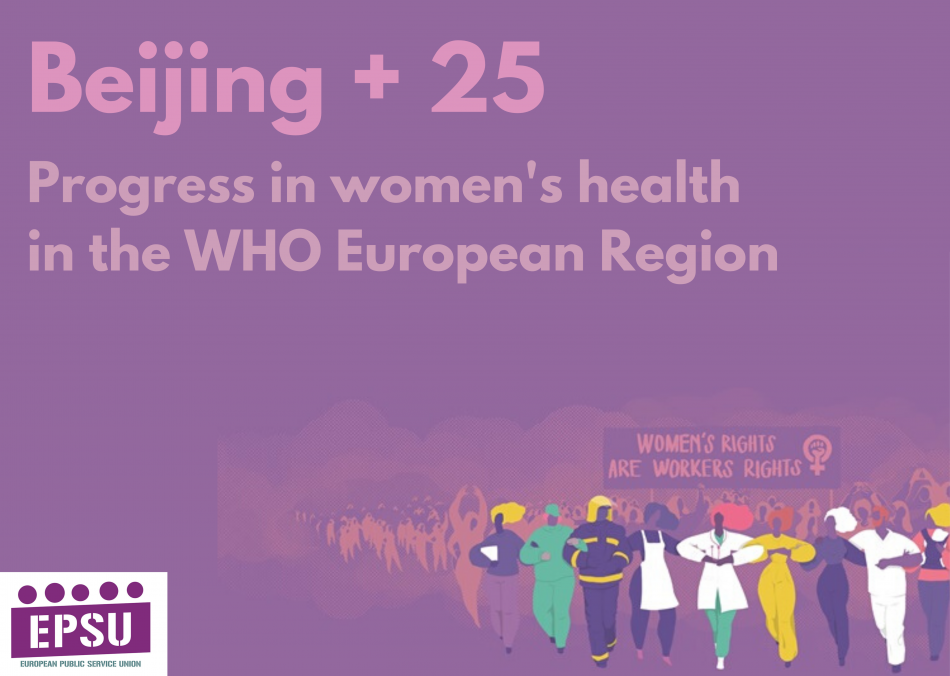 EPSU dedicates this international Women’s day to one of the most fundamental human and women’s rights: health. During the past 25 years progresses have been made in guaranteeing access to health and services, but no right can be taken for granted and real equality is still an objective, not a reality.

During these years Unions have been fighting alongside women for the full realization of their rights, we campaigned in Ireland and in the UK to give Irish women the chance to have a safe and legal abortion, we fought extremists and radical movements in Spain and prevented a negative amendment to the law.

We continue to fight against privatization and the still prevailing rhetoric of profit over people, that is leaving behind those most in need, those living in less rich or rural areas deprived of their fundamental rights. We are now facing, for example in Italy and France, a real degradation of women’s rights via the cuts to public services for women’s health. In many parts of Europe, family planning and services for sexual and reproductive health have been the target of cuts, because women’s bodies are still very much a political battleground.

We will be marching in the streets on Sunday, supporting collective actions in parallel with the Women’s Global Strike to advance its specific agenda, we will be shouting that “our bodies, our choice”, because every self identified woman is entitled to have full control over her body.

Women’s health will also be put at risk every time that policy making continues to base measurements, planning and decision on the so-called “neutral masculine” instead of being gender sensitive and take into account gender health. This also means that every worker must be enabled to have full protection from preventable cancers that are caused by exposure to chemicals at work. In the upcoming revision of the Directive on carcinogens and mutagens we will make our voice heard to ensure that this happens.

This Sunday, 25 years after the Beijing Declaration, we will be marching against discrimination, for women’s rights and for better public services, because there is only one way forward: towards full equality!

This statement is available in EN, FR, DE, ES, IT, RU, SV and TR

12th May marks International Nurses Day, a day to celebrate the work of nurses around the world. But recognition of their role in our societies must not be reduced to symbolic gestures.
Health
Quality employment
Solidarity
All PoliciesAll Policies