Member of the vida private services union working at the network of religious hospitals have voted by a two-thirds majority to accept a new pay deal. Increases will range from 8.4% to 11.2% (for the lower paid) with a minimum increase on monthly salaries of €205. The union has welcomed the agreement that begins to recognise the work done by health staff during the pandemic and helps address the rising cost of living. Vida also underlined the importance of the high level of member participation in campaigning and industrial action that contributed to securing a better pay offer from the

The FNV and NU’91 health workers’ unions have worked to ensure that the 80,000 employees of the seven University Medical Centres will all receive a 10% pay rise in 2023 – 6% in January and 4% in November. There was some concern that not all employees would receive the same increase at the same time and the trade unions were considering legal action to get the employers to properly implement the collective agreement. The increase is slightly below the retail price inflation level of 11.2% but the aim will be to negotiate further compensation for inflation in the next bargaining round.

Unions get commitment to collective bargaining for overseas staff

The FSC-CCOO and FeSP-UGT public service federations have ensured that government employees working overseas will be covered by a proper process of collective bargaining. As a first step to address the lack of proper pay bargaining over the past 14 years, the unions have agreed a 3.5% pay increase for all overseas workers backdated to 1 January 2022. Negotiations over a pay rise for 2023 will begin in the first quarter of the year along with bargaining over a range of other issues including telework, the 35-hour week, equality plans and an updating of the 2008 agreement on working conditions.

Pay and bargaining progress for health and justice workers

The CITUB trade union confederation reports that workers in regional health inspectorates and emergency medical centres have seen substantial salary increases from the beginning of December. Regional health inspection staff have seen pay rise by up to 30% while emergency medical staff are getting around 22%. Unions have been organising a series of protests over pay since the autumn. Meanwhile, the Podkrepa trade union confederation reports that workers at the Ministry of Justice are covered by a new framework agreement that strengthens social dialogue and ensures protection of workers’ social

The LSADPS health workers’ union reports that its members in public health will benefit from pay rises of around 14% from the beginning of this month. This is based on the collective agreement negotiated by the LSADPS and eight other health sector trade unions in 2021 and updated in October of last year. Along with higher basic pay there are increases to the coefficients on which salaries are based and these will apply to the members of the trade unions that have signed the agreement. The average increase for all health staff will be around 8%.

The USF trade union reports that staff in European institutions, bodies and agencies (with the exception of the European Central Bank) will get a net 4.5% increase in salaries, pensions, and social allowances backdated to 1 July 2022. This is on top of the 2.4% increase applied earlier this year, giving a total net increase of 7%. This is the result of a formula that has been applied since the early 1980s, following industrial action by USF both then and later to defend the formula. The salaries (and later also pensions) of staff have kept pace with the development in the purchasing power of

After six weeks of strike action the CGT trade union has secured a monthly increase of €200 for workers in the GRDF gas distribution company. The first increases will be implemented in January with increases ranging from a minimum of €50 up to and €87. The CGT is concerned about any attempt to intimidate strikers and has warned GRDF's management against any action that could be taken against striking employees, whether in terms of disciplinary 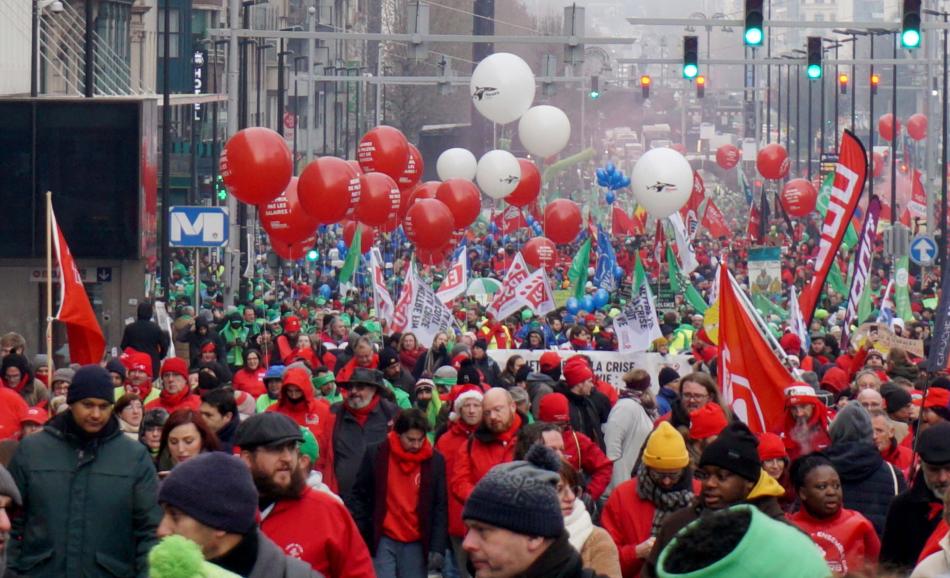 Pay deal for water board employees

With a focus on pay and the need to secure an agreement that can help workers deal with the cost-of-living crisis, the FNV trade union has negotiated an overall pay increase of 8% for water board employees but with a flat-rate element that will mean pay rises by 10% for lower paid workers. There is a one-off payment of €1,000 gross in December 2022 and then increases of €125 and 2.5% on salaries in as of 1 January 2023. There will be a further increase of 2.5% on 1 July 2023. There will be other increases on allowances. The structural increases will mean a minimum hourly wage of €14 will apply

The younion and GÖD public sector unions have negotiated a 7.15% pay rise from 1 January next year with a 7.32% increase on allowances. However, the minimum guaranteed increase of €170 a month wiil mean that the lowest paid workers will see pay rise by 9.41%. Meanwhile, the vida and GPA private services unions have concluded a new collective agreement covering 130,000 employees in the private health, social and care sector. The two unions welcomed the 8% wage increase from 1 January 2023 along with the guaranteed minimum rise of €175 a month that means an increase of 10.2% for the lowest paid

The ver.di services union has negotiated a new collective agreement covering the 18,000 employees of energy company RWE. The agreement runs to 29 February 2024 and includes a 6% pay rise from 1 February 2023. There will also be a €1500 lump sum payment before the end of 2022 and a further €1500 lump sum in 2024. Employees also received an exceptional 2.5% increase in September. Meanwhile, the union has negotiated a new agreement covering the 10,000 employees at private health group Sana. The agreement runs to 30 April 2024 and includes a 7% pay increase from 1 June 2023, with a guaranteed

In the main (IEG) electricity and gas sector negotiations the CGT, CFDT and FO unions have agreed a 2.3% increase on the basic national salary for 2023 with a minimum guaranteed increase of €1040 for the year (€80 on the monthly salary over 13 months), along with individualised increases worth 1%. The CFE-CGC union refused to sign arguing that the increase was inadequate. The negotiations followed mobilisations by the unions earlier in the autumn demanding pay negotiations to address the cost of living crisis and the increases come in addition to the extra bonuses paid this year in response to

Following the threat of protests and other actions, public sector unions, including the SDLSN state sector union and HSSMS-MT nurses’ union, have secured increases to pay and other benefits. The base for setting public sector salaries will increase by 6% from 1 October this year and then by 2% from 1 April 2023. There will also be increases to the Christmas bonus, the payment of gifts to children and to holiday allowances. Negotiations for the next round of increases will take place next year at the latest in the third week of September.