Public service workers across the UK have been involved in number of disputes over pay, jobs and safety. Waste workers in Birmingham and Doncaster are taking or planning action over pay and safety while cleaners at four hospitals in East London are continuting their campaign for a higher pay increase against outsourcing company Serco. Meanwhile in Sheffield members of the PCS civil service union are taking strike action in protest at the closure of a local Job Centre, part of a campaign against government proposals for closures across the country. Finally, janitors in schools across Glasgow

Workers at the Charité hospital in Berlin, members of the ver.di services union, organised a day of action on 8 August in protest at the stalled health and safety negotiations on the question of staffing and overwork. The workers put on rose-tinted glasses in response to the claims by the hospital management that things were improving at the hospital. Ver.di wants the hospital to agree binding rules on how it deals with understaffed shifts but so far the management has failed to move towards an agreement.

The Danish nurses' union (DSR) reports that hospitals are being given red or yellow smileys by the Labour Inspectorate to indicate that they are failing to tackle serious problems to do with the mental and physical working environment. The hospitals categorised with red smileys are those with the most serious problems arising from years of cuts that have left overworked staff struggling to maintain services for patients. The union has called on the regional authorities to take urgent action.

Timetable set for negotiations on firefighters' pay and conditions

Eight years on since the renewal of the last collective agreement, the Ministry of Public Administration has confirmed the timetable for negotiations over firefighters' pay and conditions. The FP CGIL union is looking for a pay increase to recognise the professional responsibilities of firefighters with a minimum €80 a month as agreed in the initial public sector pay talks last year. The union will also be looking for improvements in pensions and ways of dealing with accidents and occupational diseases.

The GPA-djp private services union is campaigning to defend workers' rights on working time and against pressure from employers for more flexibility in working time legislation and a move to a 12-hour maximum working day. The union points out that Austrian workers already have a 41.5-hour working week on average, among the highest in Europe, and often have to work overtime at short notice. The GPA-djp also highlights the evidence of increased health and safety risks once the working day goes over nine hours.

On 2 June 2017 the Friedrich-Ebert-Stiftung Bulgaria, together with , organised a Discussion Forum in Sofia to identify and address the challenges for effective social dialogue in Bulgaria. EPSU and HOSPEEM contributed to the exchange in highlighting the role and illustrating main outcomes of the the EU-level social dialogue in the hospital sector.
Health
Health and Safety
Recruitment & organising
Social Dialogue
Aug. 31, 2017
2017 September epsucob@NEWS 15

Some progress for care workers

Members of the FNV trade union at the Kwadrant care company have made some progress on their demands for action on jobs and overwork (see epsucob@NEWS no.15). In an initial meeting with management the workers have at least been given a commitment that travel time between clients will be fully paid working time. They will have to wait until 1 October to find out if the company will respond to their key demand not to cut jobs and to tackle the heavy workloads faced by many carers. The union has organised a petition among workers to highlight the problems they face.

On 12 September, service union ver.di organised a nationwide action by healthworkers to highlight the massive problem of understaffing in the sector. Staff were asked to ensure that they followed precisely the rules for disinfecting their hands before dealing with each new patient. Ver.di selected this as one example of the many tasks that workers simply don't have time to do properly because of the pressure of work. The union points out that workers are often under pressure to make decisions about which jobs they need to do, leading to stress and even sickness. This is the latest step in ver 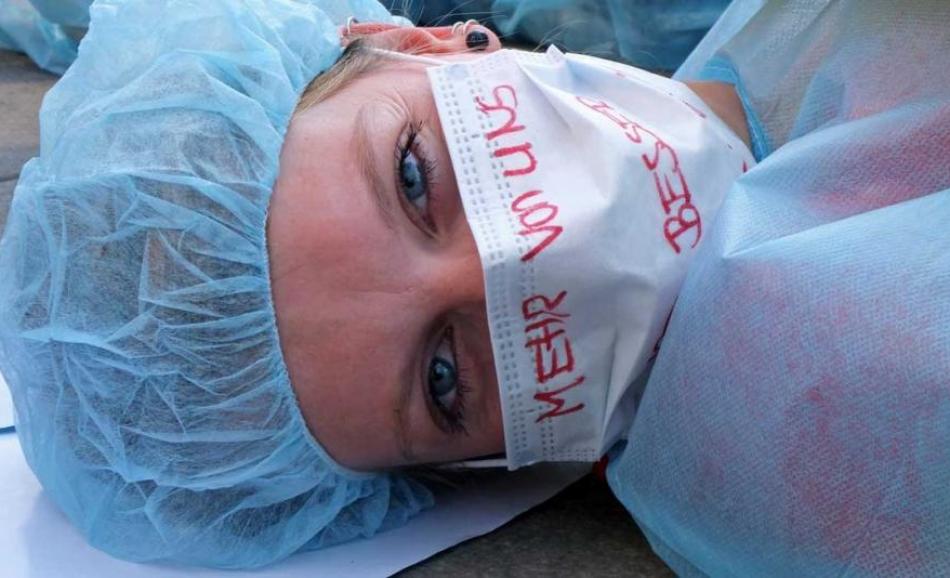 On 18 September 2017 and in the weeks to follow health workers in Germany will mobilise to get mandated staffing levels and to achieve substantial progress as to the reduction of workloads and stress at their workplaces.
Health
Health and Safety
Solidarity
Sep. 14, 2017
2017 September epsucob@NEWS 16

Unions and employers focus on funding for care sector

The GPA-djp and vida private service trade unions met with the private care employers' organisation (SWÖ) to highlight the major staffing challenge facing the sector and the urgent need for additional funding to cover better pay and conditions to increase recruitment to the sector. The unions underlined the impact of serious staff shortages that are leading to increased workloads, burnout and stress for many care workers. They want to see legally enforceable staffing levels, that set minimum standards both in terms of numbers of staff with the appropriate qualifications.

Members provide input in advance of collective bargaining round

The HK Kommunal municipal union has received plenty of input from members and activists as it prepares its claim for the upcoming negotiations. Over 7000 contributions with 20000 suggestions have been submitted to the union covering a wide range of pay and conditions. Some of the key issues highlighted by the union include the need to maintain competence funds that provide for education and training and the call for action to tackle stress. Time off to deal with care responsibilities is also a common demand, particularly from workers with caring responsibilities for older people. There are

Members of the FNV union working at a care home in Lopik in the Utrecht region have won an important victory, securing additional night staff and security measures. The workers at the care home run by the AxionContinu company organised a petition and camped outside the company's head office in order to put pressure on management. The workers argued that it was unacceptable for only one person to be on night duty with responsibility for over 60 vulnerable residents. The union will now try to tackle other issues in the company and hopes that the commitment on staffing levels will be taken up in