EPSU and PSI are backing a Labourstart campaign in support of the workers sacked by the Maltepe hospital in Istanbul. The workers had jointed a union and were campaiging for improvements in pay and conditions. The hospital sacked nearly 100 workers some of whom had been employed at the hospital for over 10 years. EPSU has written to the hospital management and the PSI general secretary Rosa Pavanelli visited the workers who have been carrying on their protest since early December. Read more here And at PSI And sign the online petition at Labourstart
S
Mar. 02, 2015

(2 March 2015) Management of the European Patent Office stated that they would not respect the verdict of a Dutch court arguing immunity from the European legal order. This is
Collective Bargaining
Union Rights
Jan. 27, 2016 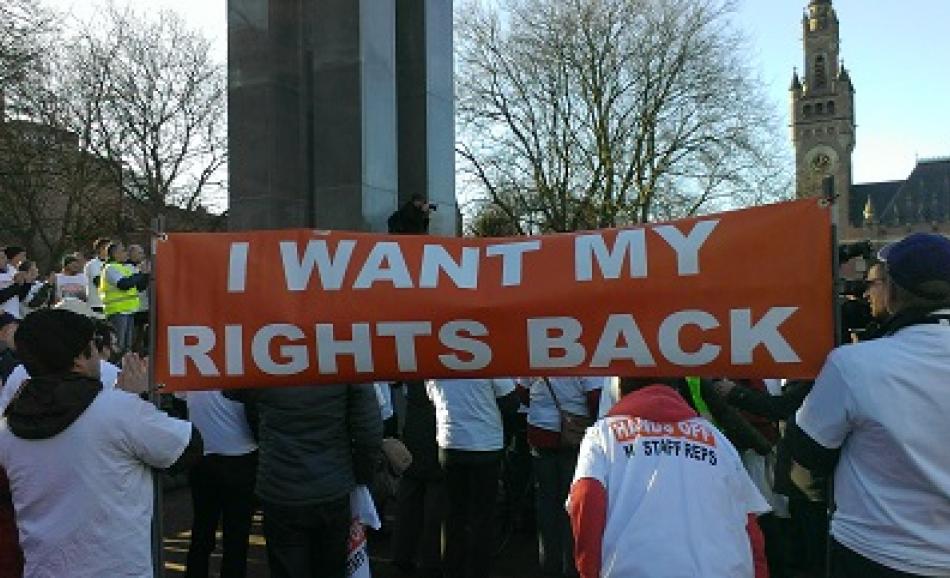 (28 January 2016) The European Patent Office boss Battestelli has dismissed trade union representatives. They worked in the office in Munich. [Protests broke out in all offices in Munchen, Vienna
Collective Bargaining
Union Rights
Sep. 17, 2004

The Swiss government has proposed cuts in public spending that would deteriorate the quality of services and cut 20.000 jobs. The Swiss unions including EPSU member VPOD are organising a
Solidarity
Union Rights
Sep. 14, 2004

DISK, one of the Turkish trade union confederations, informed EPSU that the right of freedom of association and collective bargaining continues to be seriously curtailed since the military coup in 1980.
Solidarity
Union Rights
Sep. 16, 2004

End to the Dutch Polder Model: actions between 13 September and 2 October

The government has opened a large scale attack on the welfare state. The social security system is dismantled and early retirement schemes are threatened. The Dutch government has further said
Solidarity
Union Rights
Oct. 01, 2004

During a meeting between the three confederations and their respective trade union categories, Cgil, Cisl and Uil have called for an eight-hour strike in the public services and school sectors
Solidarity
Union Rights
Sep. 30, 2004

Thursday 23 September saw a wide range of protests, strikes and demonstrations by public service workers around Switzerland. EPSU affiliate VPOD was one of 17 organisations supporting the day of
Solidarity
Union Rights
Oct. 05, 2004

Wij zijn woedend! We are, we are angry!

The refrain of the ABVAKABO action song, fitted onto the melody of an old Queen hit: more than 250.000 trade union members joined in on Saturday, 2 October at the
Solidarity
Union Rights
Oct. 19, 2004

Belgian unions organise a national strike in the non-profit, 21 October

The unions organise the strike as part of their campaign to get the government to honour its agreements, to improve pay, for 25.000 new jobs, for supplementary pensions, for additional
Solidarity
Union Rights
Oct. 20, 2004

EPSU is supporting Greek affiliate ADEDY in the following action: Civil servants are to stage a 24-hour nationwide strike on October 21 to protest against the government's draft budget for
Solidarity
Union Rights
Oct. 21, 2004

The Belgian health sector is the location for coordinated action between the four EPSU affiliates in the health sector. The CGSP, Setca, CCSP and LBC-NVK have called for working conditions
Solidarity
Union Rights
Oct. 22, 2004

The National Strike Committee of EDDSZ (hereinafter referred to as Strike Committee) calls all the county level presidents an officers of EDDSZ to make the {{National Call for Strike, the
Solidarity
Union Rights
Oct. 27, 2004

Carola Fischbach-Pyttel co-chaired a session at the European Social Forum on public services and the welfare state. This session allowed for many trade union activists to argue in favour of
Solidarity
Union Rights
Nov. 03, 2004

EPSU fully supports the one-day strike on 5 November against the announced 100, 000 job cuts in the public sector. At a time when the UK needs more and better
Solidarity
Union Rights