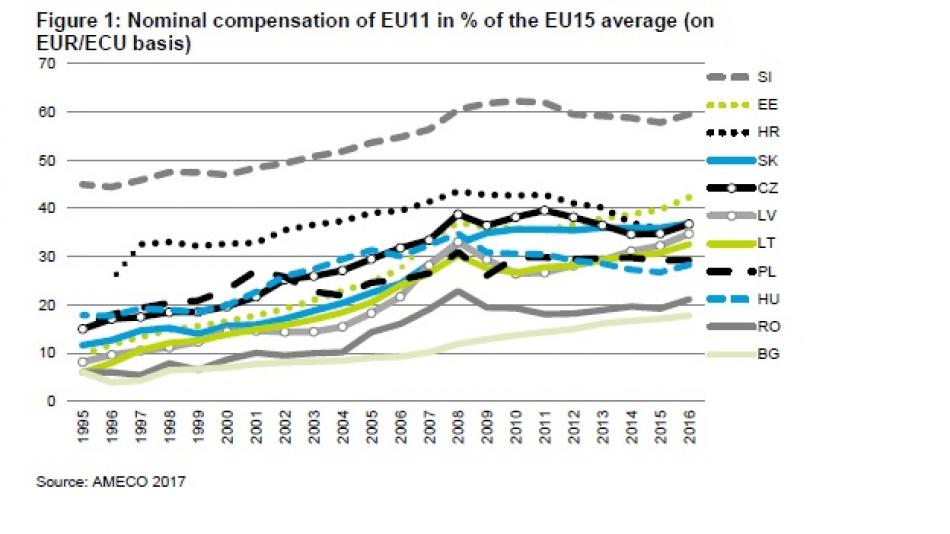 (30 August 2017) Research published today by the European Trade Union Institute (ETUI) shows that progress towards closing the wage gap between East and West in the European Union came to a halt in 2008. In fact, in six out of 11 eastern EU countries the process went into reverse.

The ETUI chart demonstrates clearly how the wage gap was steadily closing up until to 2008 when the financial and economic crisis hit. Taking average pay in each Eastern country as a percentage of average pay across the West (the 15 EU Member States pre-2004), both Croatia (43.5% to 36.9%) and Hungary (34.7% to 28.2%) show a marked decline since 2008. The gap also grew in Slovenia, Czech Republic, Poland and Romania.

Most progress was made in Bulgaria but from a very low level (11.8%) to 17.7%, still less than a fifth of average pay in the West.

Esther Lynch, confederal secretary of the European Trade Union Confederation that is running a Europe-wide pay rise campaign, said: "Workers in the EU's East need pay rises higher than inflation and increases in productivity to make up for past exploitation. The EU and national governments should encourage collective bargaining and strong trade unions and employers' organisations."

EPSU general secretary Jan Willem Goudriaan commented: "We have seen some positive developments in the public services in Eastern Europe recently. Earlier this year health and social service workers in the Czech Republic saw pay increase by between 9% and 23.5% while public sector workers in Slovakia had a 6% pay rise. In Romania, where austerity measures led to some of the sharpest pay cuts in Europe, health workers have seen their pay rise by 70% in the last couple of years, while pay has risen by 50% in public administration. We welcome these increases which will make a significant contribution to closing the East-West pay gap and help tackle the challenge of emigration from these countries, but clearly further increases are needed to re-start the convergence process."

Read more on the ETUI research

And more from the ETUC

(May 2017) A new report from the ETUI research institute reveals that workers in Poland, Hungary and the Czech Republic have seen an increasing pay gap with Germany after many years when there had been pay convergence. Reacting to the report the ETUC argues that a weakening of collective bargaining in these companies is part of the problem and calls on national governments and European Union institutions to promote collective bargaining.