(21 February 2017)  Restoring, reviving and promoting collective bargaining was a constant refrain at the ETUCs ‘Europe needs a pay rise – Its time for our recovery’, launch event, which took place in Brussels on the 14th and 15th of February.

ETUC General Secretary, Luca Visentini in his opening speech said: ‘Collective bargaining is the foundation of efficient social dialogue and democracy at work. It is the fundamental tool to make sure wage increases benefit labour and the economy’.

‘What we have seen over recent years has been a systematic dismantling of collective bargaining in most countries,’ said Visentini, ‘with very aggressive recommendations coming from all institutions for unrestricted decentralisation and even destruction of collective bargaining institutions, as part of the fixation with an export-based economy boosted by labour-cost competition. The result has been a disaster,’ he concluded.

Marco Leonardi, an Advisor to the Italian Prime Minister, confirmed that Italy has renewed collective bargaining agreements, which had come under pressure in recent years. He noted that collective bargaining agreements are a good way to translate higher economic growth into higher wages, stating it is important that trade unions focus on higher wages and salaries, in further offering his support for the ETUC’s pay rise campaign.

The President of the ETUC and the Belgium Federation FGBT Rudy De Leeuw, also voiced his support for stronger collective bargaining stating that it allows employers and workers to negotiate without fear, which is an important element of social partnerships. 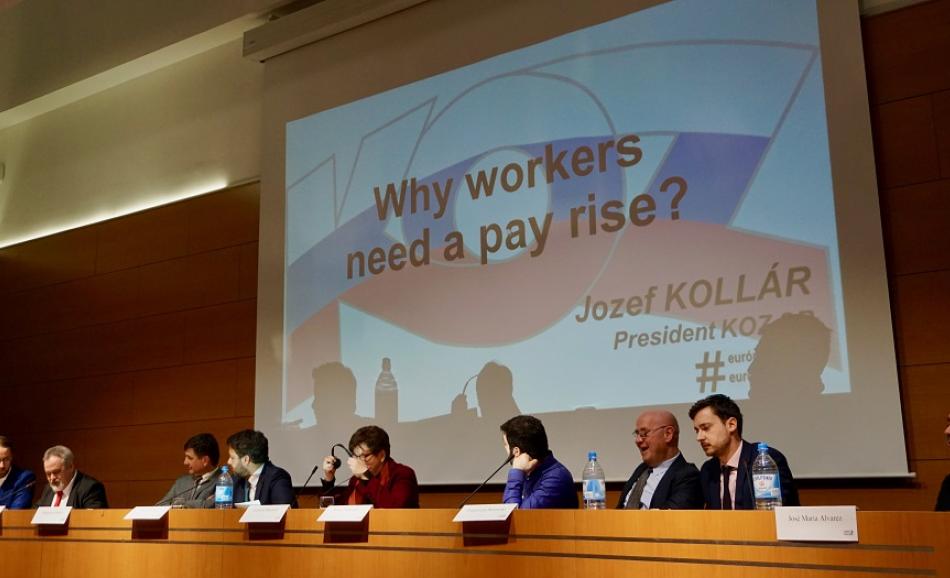 (January 2017) The ETUC has called for 2017 to be year of the pay rise. The ETUC argues that a pay rise is fully justified to tackle rising inequality and in-work poverty, and to generate growth and recovery for all. The focus will be on negotiating higher pay through collective bargaining but there will also be campaigning on higher statutory minimum wages where they exist. The ETUC will be working with the European Trade Union Federations during the campaign. There is an initial conference on 14-15 February.

(February 2017) The European Trade Union Confederation launched its "Europe needs a pay rise" campaign at a conference in Brussels on 14-15 February. A wide range of speakers underlined the need for workers' pay to catch up with productivity developments, arguing in particular that a sustainable economic recovery across Europe depended on a boost to workers' pay. The other key elements of the campaign highlighted at the conference was the need to close the pay gap between workers in Eastern and Western Europe and the continuing action required to tackle gender pay inequality.