Joint ETUI / EPSU Seminar - Preventing Damage to the Mental Health of Health and Care Workers - Launch of the Report: "Psychosocial Risks in the Healthcare and Long-Term Care Sectors" 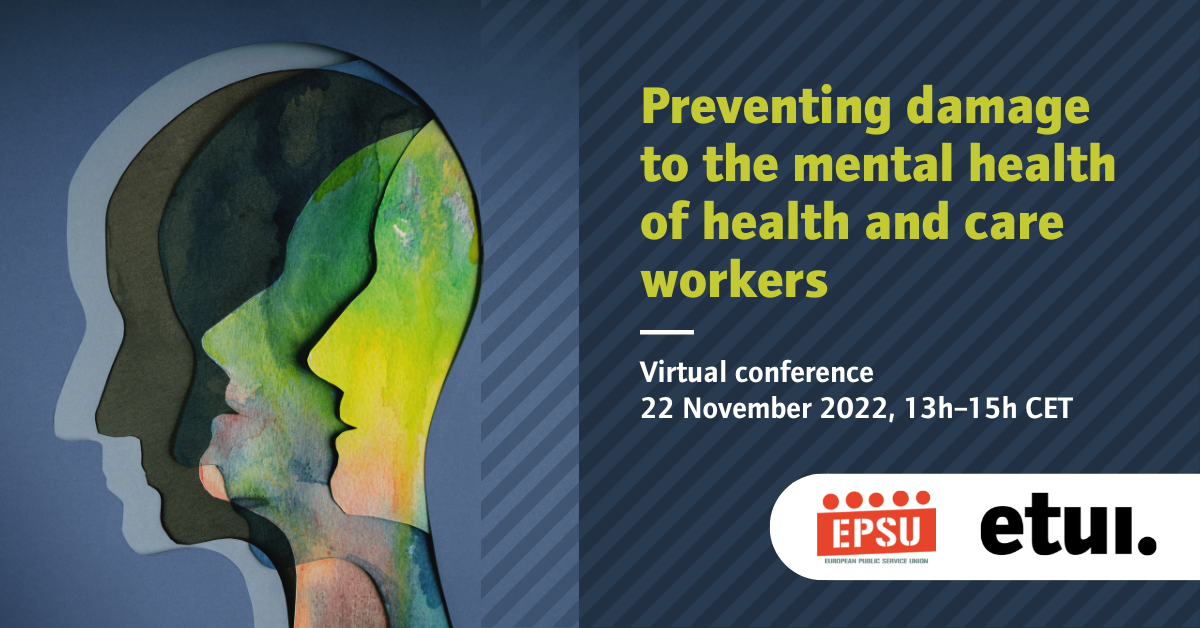 The EPSU Health and Social Services Secretariat is pleased to announce a joint public seminar with the ETUI - Preventing Damage to the Mental Health of Health and Care Workers - Launch of the Report: "Psychosocial Risks in the Healthcare and Long-Term Care Sectors"

Work-related psychosocial risks (PSR) are a major contributor to the burden of disease in Europe. The Covid-19 pandemic brought to everyone’s line of sight the huge level of stress and its health impacts in the healthcare and long-term care (LTC) sectors. At this ETUI-EPSU online conference, a new ETUI report providing an evidence overview of PSR in the healthcare and LTC sectors as well as an analysis of relevant interview data collected from trade unions during the pandemic, will be presented. The speakers will also discuss the critical issues that must be addressed in occupational safety and health, as well as in employment policies, to ensure the right of health and care workers to safe and healthy workplaces.

AGENDA (in EN only)

Launch of the Report: "Psychosocial Risks in the Healthcare and Long-Term Care Sectors"

ETUI recently published a report that presents evidence on work-related psychosocial risks (PSR) and analyses the conditions and circumstances that give rise to these risks. On November 22, 2022, EPSU and ETUI co-hosted a webinar to launch this report. The meeting was attended by 120 participants, consisting of representatives from trade unions, employer organisations, research institutions as well as from the European Commission.

Jan Willem Goudriaan (General Secretary, EPSU) opened the meeting by underlining the importance of ETUI’s report for trade unions and those responsible for collective bargaining.  He argued that the evidence presented in the report further strengthens the case for having a directive on psycho-social risks. The legislation could significantly improve the situation of health and long-term care workers.  He also emphasised that critical staff shortages in the health and long-term care sector are a major reason why the existing staff is stressed and over-burdened.

On similar lines, Nicola Countouris (Director of Research Department, ETUI) stated that the report gives a new, in-depth insight into the deterioration of working conditions due to work-related stress, low staffing levels, and lack of funding. He argued that, so far, we as society seem to be passing the opportunity to build back better after the Covid-19 pandemic. The wellness economy is possible only when those delivering and maintaining it are well.

Paula Franklin (Senior Researcher, ETUI), the coordinator and one of the co-authors of this research report, emphasised that psychosocial risks should be addressed at a collective not individual level. The root of the problem can be traced back to organisational and collective issues. Clara Llorens Serrano (Senior researcher, ISTAS-CCOO), another co-author of the report, built on Franklin’s point, arguing that psychosocial risks have psychological impacts, but have social origins. A 2021 meta-literature review revealed that the odds of developing depression increase by 77% if the work is demanding and the employee feels like they have a lack of control.

Barbara Helfferich (Independent Researcher, ETUI), co-author of the report, presented concrete actions by trade unions in Sweden, Spain, and Germany to prevent psychosocial risks at the workplace. In Germany, trade unions concentrated on the construction of works councils and creating collective agreements in the hospital sector. In Sweden, trade union worked with municipalities to prevent psychosocial risks at the workplace and developed strategies that especially focus on violence at work. In Madrid, the unions of the Sectoral Board of Health reached an agreement with the Primary Care Management to limit the workload on health and long-term care professionals. Unfortunately, the Ministry of Health refused to sign the agreement this week and the unions continue to demand a swift ratification and implementation of the agreement.

Dietmar Erdmeier (Ver.di, vice-president of EPSU Health and Social Services Committee) stated that more and more workers are leaving the health and long-term care sector despite loving the work, due to the difficult working conditions. Many of these workers are willing to return to the sector if the working conditions improve, which in turn require regulation and legal solutions. He also highlighted the responsibility of employers in preventing psychosocial risks and the importance of involving trade unions in conversations about working conditions.

Sylvian Renouvel (Director, Federation of European Social Employers) agreed that employers have an important to role to play in preventing psycho-social risks. He argued that policies on psychosocial risks must be made in conjunction with other health and safety instruments such as the policy on musculoskeletal disorders (MSD). He also pointed out that health and long-term care institutions have extremely small management teams causing them to be overworked.

Afterwards, Marta Branca (Secretary General, HOSPEEM) talked about the importance of risk assessments at work. Applauding the health and long-term care workforce for its adaptability and resilience during the pandemic, she argued that the health and long-term care professionals were already quite stressed before the pandemic. She also mentioned past and recent EPSU-HOSPEEM projects on musculoskeletal disorders and psychosocial risks. Kevin Flynn (Policy and Communications Advisor, Eurofound) took the opportunity to briefly talk about the Endstress campaign that EPSU has been involved with. This campaign calls for an EU level directive on psychosocial risks at work.

Solveiga Eidukynaite-Gerard (Policy Officer, Health and Safety Unit, DG EMPL) remarked that the new ETUI report was very helpful for the work of the European Commission. She expressed appreciation for the focus on national examples. Expressing solidarity on the issue, she stated that the Commission is aware that work-related psychosocial risks must be addressed urgently as they are the second most frequent work-related disease in the EU.  A comprehensive approach to mental health is part of the Commission’s work programme for 2023. An OSH overview of health and long-term care sector will begin next year and finish in 2026.  An OSH Summit will be held in Stockholm in May 2023 which will hopefully raise the political visibility of mental health at work.

Marian Schaapman (Head of OSH Unit, ETUI) concluded the conference by re-iterating one of the key takeaways of the report: psychosocial risks are in large part caused by workplace issues. She also remarked that staff shortages in the health and long-term care sector are the elephant in the room, that need to be addressed urgently for any other solutions to work. Adam Rogalewski (Policy Officer, EPSU) invited all present to join the EPSU demonstration on December 9 demanding health ministers to address staff shortages in the sector and to prioritise the concerns of the health and long-term care workforce.