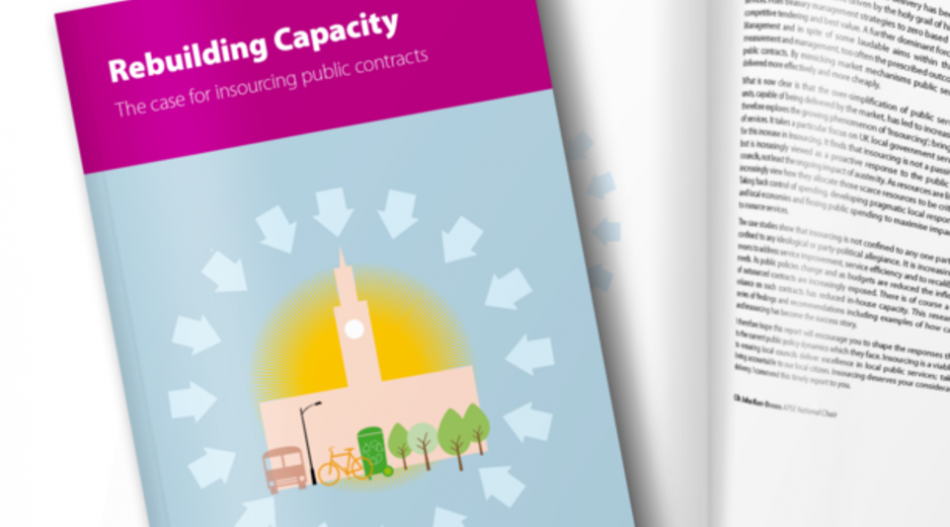 A new report by the Association for Public Service Excellence (APSE) in the UK provides further evidence of the trend towards and benefits of insourcing public services.

Rebuilding capacity: the case for insourcing contracts is based on a major research project carried out by the University of Liverpool which examined recent trends in insourcing (or remunicipalisation) and some of the key arguments for the process. The report includes six detailed case studies from different municipalities across the UK, involving a range of local government services. A survey of APSE members found 73% of respondents had or were in the process of insourcing one or more services.

The research indicates that the trend has been building for some time and predates the recent cases of privatisation failures marked by the collapse of the major outsourcer Carillion last year and the recent decision to bring the probation service back under public management.

Rebuilding capacity argues that, in contrast to the fragmentation created by privatisation, insourcing gives public authorities greater direct control over more resources and the flexibility to use them in the most effective ways. This includes more scope to channel the value of services into the local economy and to influence employment and environmental standards.

The report acknowledges that there can be challenges involved in the transfer of workers from outsourcing companies, particularly in relation to ensuring that they benefit from local government pensions. In some cases, the transfer is to arms-length council companies rather than to direct local authority employment. The case studies indicate some of the issues and the ways in which local authorities try to address them and also the fact that in some councils, for example Halton in North West England and Islington in North London, one of intentions behind insourcing was to ensure workers got a living wage.

Above all the case is clearly made for forward planning and the importance of a role for workers and their trade unions. One of the main recommendations of the report is that:

"Trade union and workforce involvement in insourcing discussions are both essential and helpful and should be encouraged. The research shows that they are best placed on the ground to know where outsourced contracts are failing to deliver. Use the knowledge of the people who deliver the services."

APSE is a UK-wide local government network of around 300 local authorities.

Over a million public service workers get less than living wage

A new analysis from the research organisation, the Living Wage Foundation, shows that over one million public service workers are paid less than the living wage - GBP 9.00 (EUR 10.50) an hour outside London and GBP 10.55 (EUR 12.30) in London. These figures are calculated by independent researchers and are higher than the official minimum wage. Public service union UNISON says that recent pay deals in health and local government have lifted minimum wage rates in collective agreements above the living wage but many workers employed by private contractors in care, catering and cleaning and other services are on lower rates. UNISON members at Liverpool's Women's Hospital took strike action on 25 February to secure higher pay while other contractors in the health service have committed to increase rates. Members of PCS working for contractors at the Department of Business, Energy and Industrial Strategy have also been on strike for higher pay.

Public service workers across the UK have been involved in number of disputes over pay, jobs and safety. Waste workers in Birmingham and Doncaster are taking or planning action over pay and safety while cleaners at four hospitals in East London are continuting their campaign for a higher pay increase against outsourcing company Serco. Meanwhile in Sheffield members of the PCS civil service union are taking strike action in protest at the closure of a local Job Centre, part of a campaign against government proposals for closures across the country. Finally, janitors in schools across Glasgow have won a pay increase and regrading following a long dispute involving strike action.