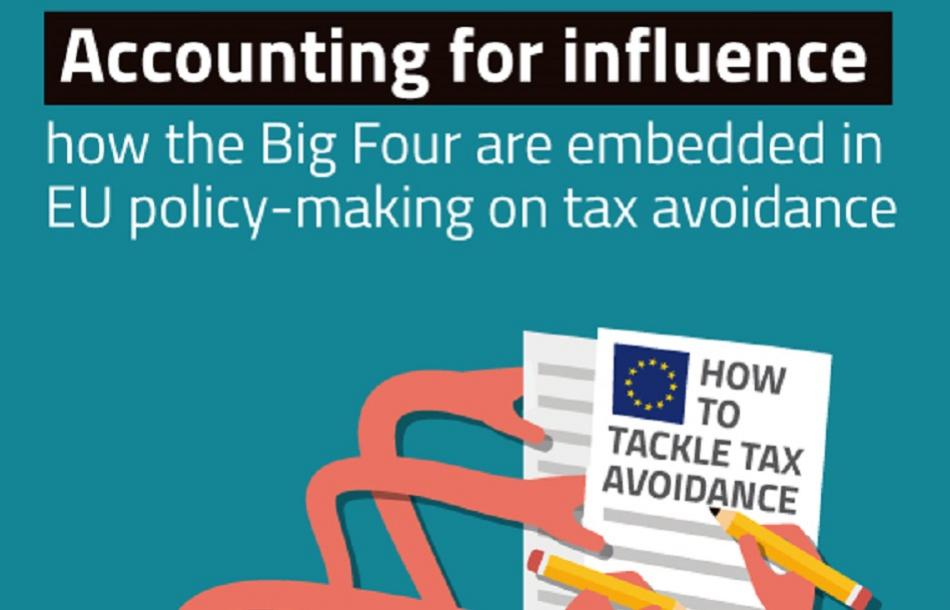 “Accounting for influence: how the Big Four are embedded in EU policy-making on tax avoidance” has been produced by Corporate Europe Observatory.

The report  exposes the influence of the Big Four accountancy firms (Deloitte, Ernest & Young (EY), KPMG, PricewaterhouseCoopers[PWC]) on EU tax avoidance policy. Despite the fact that they facilitate and profit from corporate tax avoidance strategies, the Big Four are still seen as legitimate partners in policy-making on this issue. Alongside big business interests they undermine efforts to tackle tax avoidance and to recoup some of the billions that are lost to the public purse.

Big Four are ever-present in the European Union’s policy processes for tackling corporate tax avoidance. They work through several channels of influence including the European Commission on tax policy via public procurement contracts. This is just one of many channels they work through, and one example of this influence in action is the intensive lobbying by the Big Four and big business interests against public country-by-country reporting.

And yet, they continue to be treated as objective and legitimate partners in EU policy-making circles.

A study for the European Parliament has estimated that corporate tax avoidance costs the EU between €50 billion and €70 billion a year – and could even be as high as €160-€190 billion.

We must protect the public interest. It’s time to kick the Big Four out of EU tax avoidance policy!

{(25 March 2010)} Corporate Observatory Europe published a new report on the EU 2020 strategy. It compares the views of European Round Table of Industrialists and finds that on key issues the Commission follows the view of the ERT. And let us not forget what it is all about as Baron Janssen, a
Transparency & Corruption
Apr. 25, 2016

(19 April 2012) 15 years ago Corporate Europe Observatory (CEO) was established (1997). Its mission was to explore if and how corporate interests are capturing the Commission. It published a report {Europe, Inc.: Dangerous Liaisons between EU Institutions and Industry}. That report exposed the
Transparency & Corruption