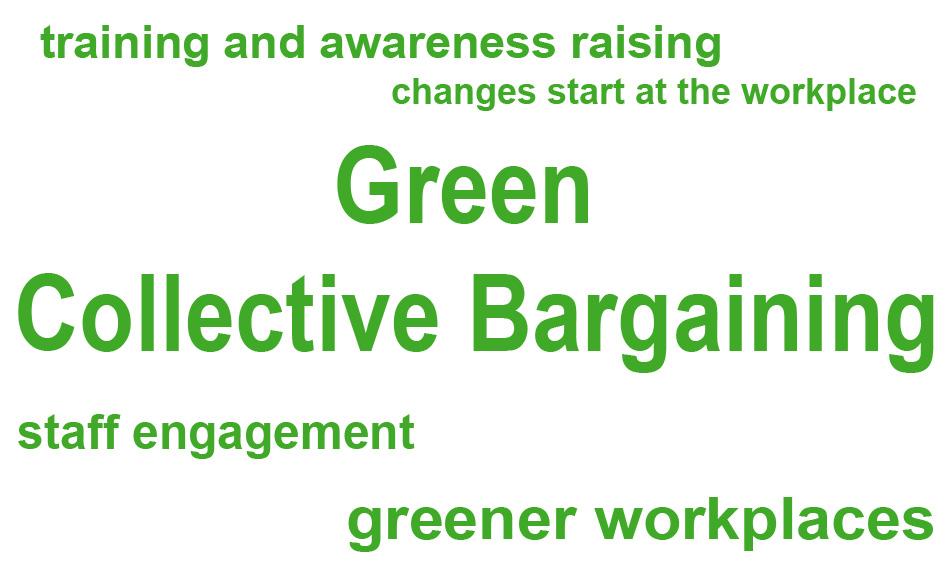 (27 June 2017) In 1987, the United Nations published the Brundtland Report which argued that sustainable development to tackle climate change should be based on three pillars - economic, social and environmental. As economic activities produce most greenhouse gas, both the private and public sector must commit to environmentally friendly policies. “Green collective bargaining” is part of the response to climate change, since it links environmental solutions to social commitment so as to positively transform the economic efficiency of innovative organisations.

EPSU's 2011 discussion paper, Impact of climate change on public services in Europe, said that “it was stressed in several discussions in EPSU that change starts at the work place. EPSU is committed to assist work place representatives by making information available on how environmental and climate change can be addressed at workplace level and collective bargaining[1]”.

Even if green collective bargaining might be a new idea, there is a sense in which it has always had an environmental perspective. When employees negotiated to improve their working conditions, it could happen that at the same time they were helping create a greener workplace or getting their employer to adopt a greener strategy. For example, people working with asbestos - which was eventually recognised as a cancer-causing agent- were collectively fighting to have more protection and to limit its use, and this happened long before environmental issues were on the agenda[2].

EPSU believes that public service organisations should actively integrate green provisions into their collective bargaining. To assist local trade union representatives in addressing some of the issues, guidances been developed at both European[3] and national levels[4]. The Trade Union Congress (UK) lists a series of benefits for unions in integrating green issues into collective bargaining. To name a few[5]:

Generally speaking, green collective bargaining is not yet very widespread, but some initiatives have already taken place[6], in particular in the UK. Without necessarily being as binding as a normal collective agreement, the TUC has proposed a model of joint environment and climate change agreement[7].

A local example: the Joint Environment and Climate Change Agreement in Stockport

This Joint Environment and Climate Change Agreement (JECCA) was negotiated between public service union UNISON and Stockport Council[8].  The Council aims to:

The RISE project[9] refers to a common structure between the CSC and the FGTB trade union confederations. Its main goal is to support environmental actions in firms through reps' commitment. Financially supported by the Walloon government since 1996, RISE assists employee reps on environmental questions and on mobility. The issues addressed by the network include waste, energy saving, food and mobility and alternative means of transport.

RISE also offers training for reps and practical support for its members.

A Canadian initiative: the Work in a Warming World research project

The Work in a Warming World research project[10] gathers all the “green” clauses from Canadian collective agreements that are publicly available. This initiative is interesting for three main reasons:

It indicates what kinds of action are taking place outside the European Union. The database has plenty of diverse examples from both private and public sectors, providing plenty of ideas for unions. The initiative shows how easu it ccan be to introduce green clauses into collective bargaining.

The two groups of public sector unions organised in the Frente Comum and FESAP federations have agreed their main collective bargaining demands for 2018. There are several common issues with unions calling for measures to tackle precarious employment, to unblock opportunities for career progression and confirm a 35-hour week for all public sector workers. The unions want to see a pay rise in 2018 that will begin to compensate workers for the loss of purchasing power since 2009, with the Frente Comum calling for at least 4% while the FESAP demand is for at least 2.5%. The federations also want to see an increase in the minimum wage for public administration with Frente Comum specifying EUR 600 a month as the target. They also want a clear commitment to a proper process of collective bargaining.

The public sector federations, FP-CGIL, CISL-FP and UIL-FPL, have expressed their anger in delays to negotiations covering over a million workers in public health and local government. The unions argue that the basis for negotiations across the public sector were laid out in the framework agreement of November 2016 and there is no justification for not moving forward quickly with the sector-level negotiations. The three federations are planning a mobilisation for 5 February to put pressure on the government and employers.

The Frente Comum group of public service unions has criticised the government for failing to respect existing collective bargaining arrangements in the public sector. The government has put forward reforms to public sector pensions without going through the proper procedure for consultation. Instead of negotiating directly with public sector unions the government will use a social dialogue forum that includes private sector employers. The Frente Comum unions are concerned about the impact of the proposed pension reforms which could reduce rights for workers to retire from 60 with 40 years' service, for example.