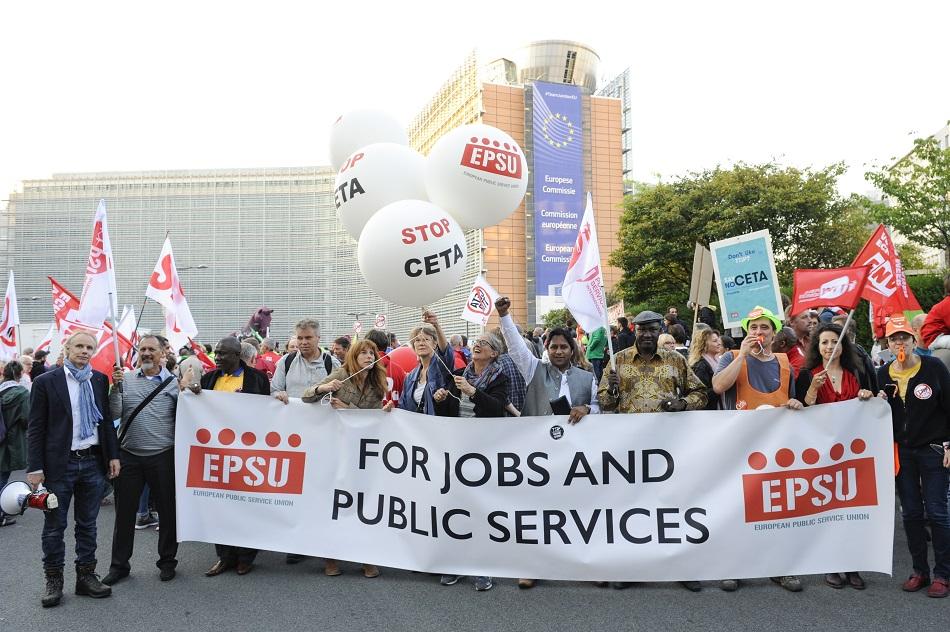 (17 May 2017) The European Commission (EC) published a  ‘Reflection paper on harnessing globalization’, on the 10th of May. The paper aims to launch a debate on how the  European Union (EU) and its Member States can shape globalization in a way that anticipates the future and improves the lives of all Europeans. This new missive echoes the EC Communication ‘Trade for All’ published in October 2015 which acknowledged that the benefits of trade are not shared fairly or evenly.  This new paper contributes to the current debate set out in the White Paper published on the 1st of March, on the Future of Europe.

EPSU General Secretary Jan Willem Goudriaan commented: ‘With many workers questioning the benefits of European integration and globalisation, this paper helps with reflection on the role of the EU to realise a more just global society. We need to see more concrete actions to have real improvements for example in protecting trade union rights. And commitments not to do things that endanger that society. The EU should stop promoting PPPs through its development aid and policies for example’.

There are many statements in the paper that trade unions and civil society  welcome, not least that  ‘we should take forward efforts to improve social and labour standards and practices, in close cooperation with the International Labour Organisation, but also civil society, social partners and the private sector. In this context, collective bargaining systems should be promoted at global scale’.  The paper also makes the link with the UN Sustainable Development Goals(SDG) and with the upcoming new European Consensus on Development to be adopted next month.  As to the concrete measures the paper is rather vague.

A closer reading shows that the analysis underpinning the paper supports current policies.  There are many  snappy facts and figures to show the benefits of globalization;  In contrast citizens’ and workers’ concerns  are expressed as  doubts, fears, perceptions and challenges.

The paper rightly notes:   ‘Moreover, large corporations can take advantage of loopholes in international rules and shift profits to low-tax jurisdictions rather than pay taxes where they produce and sell.  These strategies deprive EU governments of tax revenues and contribute to unfairness and the perception that global integration only benefits bigger companies and well-off citizens.’  This is more than a ‘ perception’ as at the same time funding public services is undermined by companies not paying their fair share in taxes. The EU Commission has calculated that close to a trillion Euros are not paid in taxes EACH year.  The EU should lead by example, and end tax havens and introduce Public Country by Country Reporting as demanded by EPSU.

The Commission admitted that trade agreements such as CETA concluded with Canada do not include provisions to counter this. On the contrary, CETA says that bilateral tax deals take precedence. CETA  therefore will make it more difficult in future to ‘close the loopholes’ in international rules identified by the EC itself as a problem.  The paper might have admitted that CETA will strengthen ‘bigger companies’ by giving them their Investor Court System that will protects their rights more than anyone else’s.

Multinational companies get away with crimes as global institutions are weak compared to the deep pockets of such corporations. That is why EPSU and many others support the efforts to come to a Global Treaty to end the impunity of corporations. This is discussed in the United Nations Human Rights Council. It has set up an intergovernmental working group on transnational corporations and other business enterprises (IGWG).  The Commission does not make clear if it supports this and if it will ask Member States to define a supportive common position. The Commission can play a positive role. It can be negative as well, for example when it did not support the UN resolution on the Right to Water and Sanitation a Human Right.

We expect the Commission and Member States to stop supporting t policies that have a negative impact on global society. Earlier work on the paper on European Consensus on Development has shown that the Commission continues to promote Public-Private Partnerships despite well known problems. If you have good public administrations and governance you do not need PPPs. If you do not that have good administration stay away from PPPs.

The ‘proof of the pudding is of course in the eating,’  and  EPSU wants that we will not have ’business as usual’  but a real turnaround of policies that can  support the good intentions expressed.   Such a turnaround would mean ending austerity policies, modernizing EU tax rules to ensure that they are fair and progressive,  reversing privatization of public services, reducing  poverty and  precarious employment, and  increasing  public investment to tackle  climate change and address social needs.

A first discussion on the Communication in the European parliament

The vpod public service workers has called on the federal government to deliver nationwide, binding rules on pay and working time for home care workers. It argues that non-binding, cantonal (regional) agreements are not effective enough, particularly on key issues of working and rest time. Vpod also says that the proposed hourly minimum wage of CHF 19.20 (EUR 17.40) doesn't guarantee a decent income and that a monthly minimum of CHF 4000 (EUR 3630) with a 13th month is necessary.

The latest stage in the long-running process of introducing an Enforcement Directive to strengthen implementation of the rights of posted workers has seen the European Parliament agree a draft that falls short of the measures called for by the ETUC. While the proposed legislation includes elements that might help clamp down on bogus self-employment and letterbox companies, the ETUC is concerned that requirements for "proportionate" action might undermine some of the stronger measures being taken by individual member states. The Enforcement Directive still needs to be approved by the European Council. The ETUC is now arguing for a strengthening of the Posted Workers Directive itself.Read more at > European Parliament (23 languages)And at > ETUC (EN/FR)
Jan. 12, 2017