TiSA, the international Trade in Services Agreement, who benefits from it? 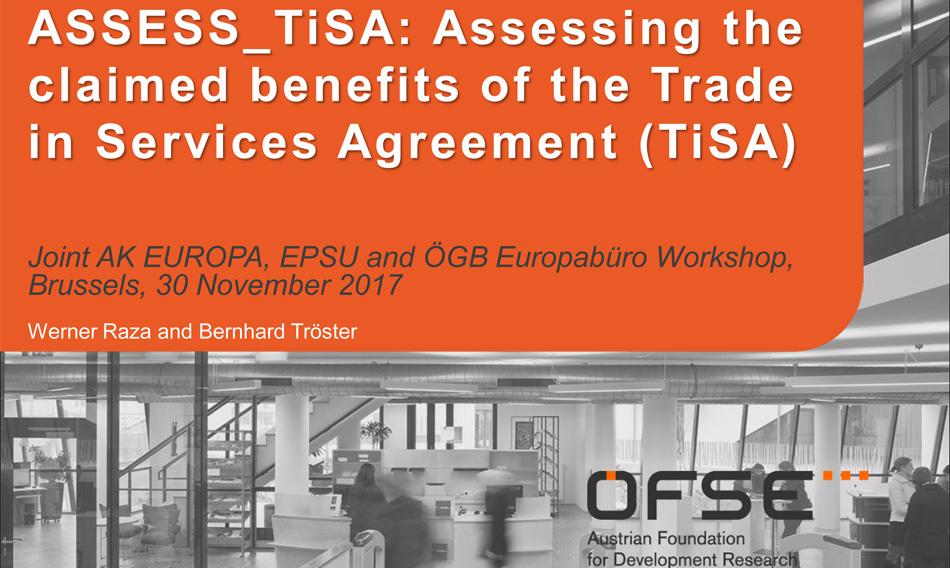 ASSESS_TiSA: Assessing the claimed benefits of the Trade in Services Agreement (TiSA)
by Werner Raza, Bernhard Tröster, Rudi von Arnim
This report has greatly benefitted from remarks and comments of the participants of the joint AK EUROPA, EPSU and ÖGB Europabüro workshop that took place in Brussels on 30 November 2017.

(19 December 2017) Please see below a brief report of the workshop organised on 30 November 2017 by AK EUROPA, the European Federation of Public Service Unions (EPSU) and the ÖGB Europabüro.The workshop, which brought together experts associated with the European Commission, the European Parliament, NGOs, trade unions and academics, discussed how to assess the economic benefits of TiSA, the international Trade in Services Agreement.

Even though the official negotiations on TiSA are currently on hold,  the questionable foundations of the economic impact assessments on TiSA have increasingly become the focus of attention. Against the background of the official “Sustainability Impact Assessment” ( SIA) of the European Commission - carried out by ECORYS - AK Wien commissioned the study “Assess TiSA“ from the Austrian Research Foundation for International Development (ÖFSE), which above all also critically examines the official economic interpretations. The Workshop offered the opportunity to discuss the interim results of their research in more detail with the authors of the study.

In his introduction, Oliver Prausmüller, trade expert at AK Wien, outlined the currently discussed controversies and scenarios on “Where are we now?” of the TiSA negotiations. Currently, there are above all three scenarios: firstly, negotiations are fully suspended and major negotiating parties, such as the USA or the EU, instead focus on bilateral deals. Secondly, the USA officially retreat and TiSA is continued under EU leadership. Thirdly, the USA, following an intermediate stop, turn to TiSA with new vigour and possibly even more offensive mandate. Hence, given the current situation, it is difficult to assess the progress of TiSA. However, the offensive lobby interests behind TiSA in areas such as public infrastructure, data protection or environmental services are anything but off the table.

In his presentation, Werner Raza, study author and head of ÖFSE, elaborated on three key points of criticism: the positive economic effects on GDP, which in the now available official impact assessment are estimated at 0.1% for the EU, can be rated as insignificant. In addition, these are unrealistic model assumptions with regard to the actual extent of TiSA's deregulation targets. However, at the same time, these too narrow assumptions form the basis for the economic analysis of SIAs. Finally, the study criticises the inadequacy of the methodological approach, as it cannot depict important economic and social effects, such as unemployment, distribution and inequality. Future SIAs have to consider a more comprehensive impact on social effects and in particular base their methodology on the positive economic role of regulations.

Markus Krajewski, Professor at Friedrich-Alexander-Universität Erlangen-Nürnberg opened the subsequent round of commentators against the background of his ongoing examination of the legal effects of trade agreements. He does not regard TiSA as the only problematic agreement. There are numerous trade agreements with chapters on liberalisation in the services sector. In his opinion, these mainly concern the reduction of alleged hurdles. Krajewski also emphasised the missing reference to the impact of human rights.  As an alternative approach to services trade liberalisation one should ask oneself the question, how these could be sensibly flanked by regulations. Apart from that, the effects of an offensive liberalisation agenda also outside the EU – for example in the water supply sector – are not sufficiently taken into account.

In his comment, Lucian Cernat, Chief Economist DG Trade European Commission, conceded that the submitted Impact Assessment was not perfect. However, he emphasised the difficult data situation in services trade liberalisation. He sees an economic benefit in the liberalisation of services; even it is more difficult to depict positive effects macroeconomically. In his opinion, at the end of the day democratically elected MEPs have to decide about agreement such as TiSA.

Paul-Ugo Jean, senior assistant to MEP Jude Kirton-Darling, S&D spokesperson on TiSA, made his comments against the background of practical Parliamentary work. For Parliamentarians, SIAs only assist with decision making, if they are made available in good time and do not omit key questions. In addition, he sees the risk of tendentious results. Apart from that, he points towards the limits of Parliamentary participation, as the European Parliament has not enough opportunities to enforce concrete changes in the design of agreements and mandates respectively. Characteristic for this is the way the Commission dealt with the TiSA Resolution of the European Parliament: the Commission did not consider the contents of the Resolution in its statements.

Finally, Penny Clarke, Deputy Secretary General of EPSU, summarised the Workshop, seeing the benefit of such a forum in the open exchange of points of view and positions. The participating experts agreed that the current design of SIAs has significant methodological flaws. From this results a great need for action and the requirement to consult alternative models to assess economic, social, human rights and environmental aspects in future analyses. This need for action was even more urgent because the so-called “new generation trade agreements” were thinking of considerably extending their reach. 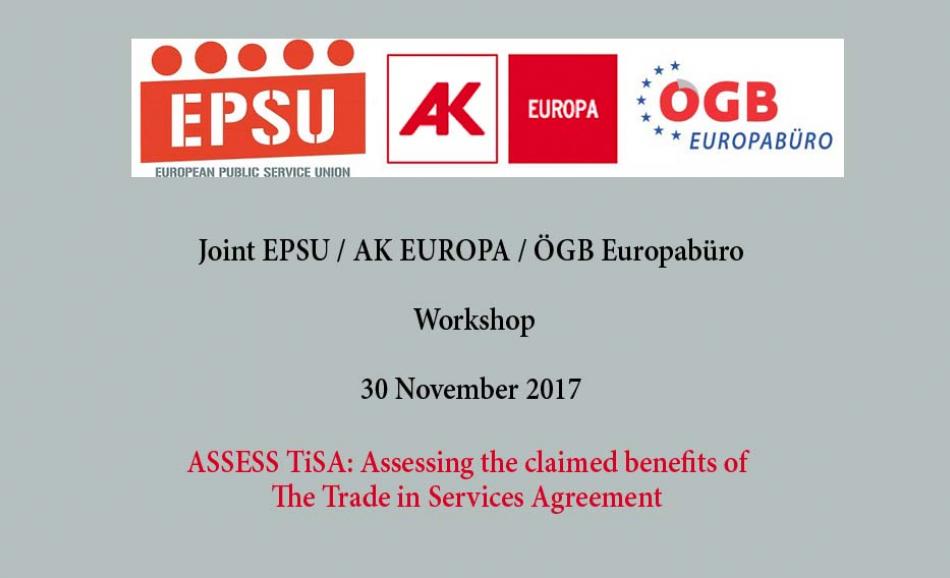 European Parliament hearing on the Trade in Services Agreement (TiSA)