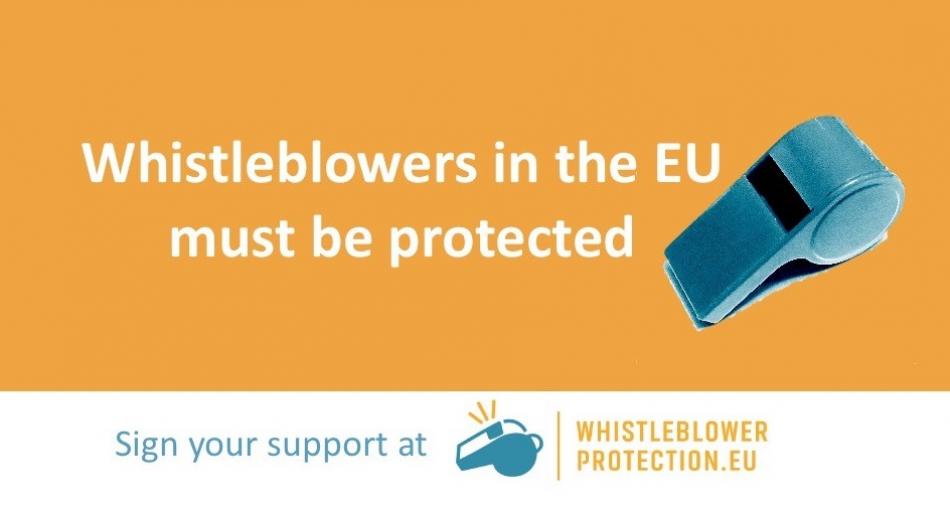 (Press Release - Brussels 23 April 2018 - embargoed until 15h) The European Federation of Public Service Unions (EPSU) welcomes the European Commission’s proposal for a directive to protect whistleblowers across the EU as a good basis to build upon.

“As tax, social and environmental abuses keep on piling up, many with a strong cross-border dimension, it is about time that workers across the EU who blow the whistle on harmful practices are protected from all forms of retaliation and criminal charges,” says EPSU General Secretary Jan Willem Goudriaan.

“The proposal’s intentions are good and go in the right direction.” he adds.It is refreshing that the Commission recognises that independent trade unions play a key role in providing advice and support to potential whistleblowers and that staff and their representatives should be consulted on the best way to establish mandatory internal reporting procedures at the workplace.

EPSU is also pleased that the concepts of “reporting persons” – workers, trainees, civil servants, contractors etc. – and “retaliation” are defined in a very broad way.

“As a tax justice campaigner, I welcome that the proposal seems to provide protection to people like Luxleaks whistleblower Deltour who has done a tremendous job to expose harmful tax competition in the European Union” adds Mr Goudriaan. “However, we cannot accept that labour law or the spirit of labour law is not amongst  the areas for which a person can blow the whistle and be protected. This omission needs to be redressed one way or another, he concludes.

The proposal published today is the result of a two-year campaign by the Eurocadres-led coalition of  trade unions, green and left MEPs and transparency groups who have been calling for a broad horizontal directive to protect whistleblowers acting in the public interest.

The proposal will close long-standing gaps in a number of member states with no or limited legal protection of whistleblowers including Germany,  Spain, Cyprus,  or indeed Luxembourg where  luxleaks whistleblower Antoine Deltour is still being prosecuted.

The proposed rules will apply to workers, including trainees, suppliers and contractors,  both in the public and private sectors. This broad personal scope is much welcomed.

The protection granted will apply  to EU policy areas regarding tax, public procurement, EU funds, protection of data, product or animal safety, amongst others.

Unlawful labour practices  or abuse of law regarding labour rights are not however covered by the proposal other than health and safety which is  subject to EU protection (1989 framework directive) .

EPSU will seek with MEPs and other stakeholders how this loophole can be closed.  Whilst this could go beyond the EU competence in some aspects, it could be an opportunity to closely bind the EU to the European Court of Human rights. Indeed, in an accompanying Communication to the proposed directive,  the Commission refers governments to the Council of Europe’s recommendation on whistleblowers that covers all types of wrongdoings that harm the public interest including therefore  labour rights.

Another limitation of the proposal concerns  the possibility for whistleblowers to directly report to the press.

This will be allowed only if the internal reporting procedures at the workplaces or external reporting to the competent national authority do not work or are not expected to work for instance when the breach concerned is done by the ultimate responsibility holder.

This limitation could be made more flexible  or it could be left  to the whistleblower to choose. This is particularly relevant with a view to strengthen the protection of the sources of journalists who, as recently seen in Malta and Slovakia, risk their life when uncovering corruption cases. Needless to say that in the case of Luxleaks whistleblower Deltour, the exposed industrial scale of tax cuts designed by PWC, Deltour’s former boss; and  granted by the Luxembourg authorities to multinationals could not have been addressed by internal or even external competent authority.

The proposal will  now go to the EU  Council and  Parliament.

EPSU, in cooperation with other members of the whistle-blowers’ coalition, will argue for a broader and possibly simpler proposal that should become  law as soon as possible.

It is likely however that some governments will give the proposal a rough ride. The support of affiliates to improve the proposal in Parliament  and ensure it be quickly agreed in Council will be critical.

A delegation led by Eurocadres with EPSU, the European Federation of Journalists, Transparency International and wemove.eu handed over the 81,063-strong petition to the Commission,14 November.
Central government
Tax justice
Jul. 07, 2015

Vote on the Shareholders' Rights Directive

Responding to pressure of unions, others - Commission publishes roadmap on whistleblower protection

The European Commission published its road map to come to proposals on whistle-blower protection 26 January 2017. It follows the campaigns of unions and others
Central government
Tax justice
Transparency & Corruption