(27 February 2013) Last week EPSU discussed the concessions and procurement Directives with Commissioner Barnier. The Commissioner clarified that the EC proposal on concessions did not seek to privatise water services, and indeed he said that water services are a “bien commun”. Nonetheless, EPSU remains concerned that the Directive will add to the pressures to externalise public services, including water, and so EPSU’s position on the Directive remains very critical. The Directive will now be discussed in the next months in a ‘trilogue’ (between the EC, Council and EP) and we need to continue to voice our concerns as well as pressing for safeguards and/or exclusions for public services, including water (as set out in EPSU’s position on the concessions Directive adopted by the Executive Committee last November. The public consultation prior to the EC proposal showed that a large number of organisations had legitimate concerns about an EU Directive in this area. Many citizens and a number of governments have also expressed their concerns since the publication of the EC’s proposal.

The timetable for the trilogue meetings will follow but we understand the first meeting will be on 12 March, with preparatory meetings taking place before this. We ask EU/EEA members therefore to urgently raise with your Government the points below, which aim to build on assurances given that the Directive is not about privatization and to anchor in the text safeguards for public services:

- Public consultation before setting up a concession: this would be a new EPSU demand that we discussed with Commissioner Barnier. There are precedents for such a requirement, including in the EU framework for State aid in the form of public services compensation. Point 14 of the State aid Communication(2012/C/8/03) says, “Member States should show that they have given proper consideration to the public service needs supported by way of public consultation or other appropriate instrument to take the interests of users and providers into account. Point 60 (a) obliges the results of this consultation to be made public. The concessions Directive could also require that the Aarhus provisions of public information, consultation and participation apply to all stages of the process of concessions, especially regarding how quality of water is protected. The Directive should spell out too that the concessions are covered by existing Directives on information and consultation, e.g., “The process of determining whether a service should be run as concession as well as the granting of a concession, are subject to general information and consultation of workers’ provisions in place.”

- Impact assessment: This issue was also discussed with the Commissioner. The Directive should oblige public authorities/grantors to carry out an impact assessment to show how the concession will protect the common good, ensure the human right to water (e.g in the case of water concessions) and promote quality public services; e.g. “ The public authority/grantor in establishing a public service concession will assess how the concession will contribute to protect the common good and implement the rights set out in the Charter for fundamental rights and the Protocol on Services of General Interest as well as the human right to water.”

- Transparency for citizens: This has been a key EPSU demand. The EP IMCO report calls for ‘non-confidential’ parts of concessions contracts (and public procurement contracts) to be made public, but this is not enough. There should be full transparency of contracts, as argued in the EPSU position, i.e., “The details of concession contracts, including regarding the transfer of operating risk and eventual payments from the grantor to the economic operator, shall be made public and open to scrutiny. Any subsequent modifications to the contract shall also be made public. Member States and the grantor shall ensure that Services of General Interest (SGI) concessions are subject to the transparency requirements and public control mechanisms that apply for publically-delivered services.”

- Social standards: Social considerations, including the mandatory respect of national labour law and collective agreements of the place of work must be guaranteed, as set out in the EP IMCO report. We should also continue to press for a reference to social clauses and ILO C94 (see arguments in EPSU study on pay clauses).

A note will follow on the public procurement Directives.

Many thanks in advance for your support, and please let us know about your Government’s position in the trilogue discussions,

Background documents in support of demands for quality public services

- EPSU position on the EC proposal for a Directive on the award of concessions contracts, November 2012 (EN/FR/DE/ES/SV/RU)
- EPSU briefing “10 facts about public-private partnerships (PPPs)”, December 2011
- Self-assessment or public debate? evaluating the liberalisation of network services in the EU and USA”, by D. Hall, PSIRU, September 2007 (EN only)
- Re-municipalising municipal services in Europe, a PSIRU report for EPSU, May 2012 (EN/RU)

Update on public procurement and concessions 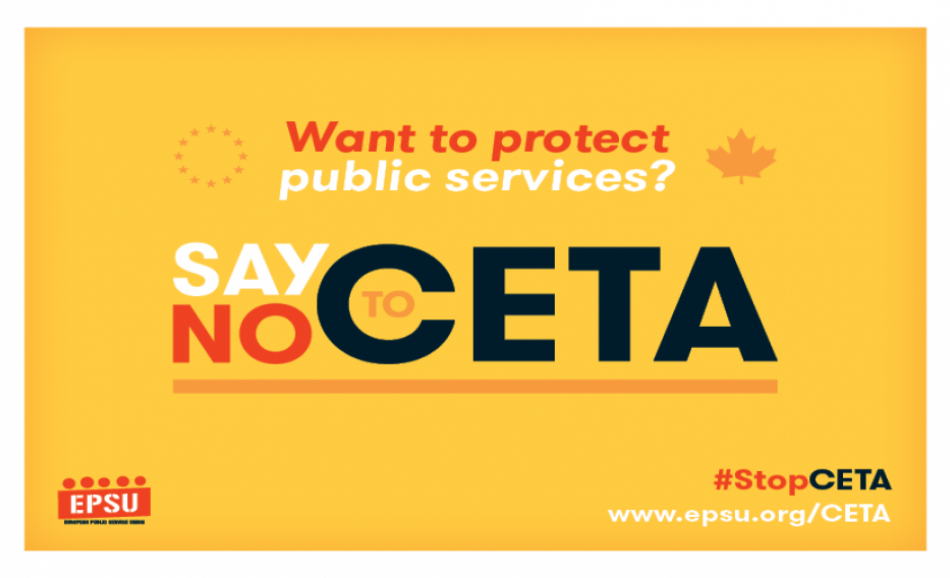 Update on the EPSU roadmap to oppose ratification of CETA and request for action in run up to key votes in the European Parliament (12 January, 24 January 1 February 2017)
Trade
Feb. 14, 2013