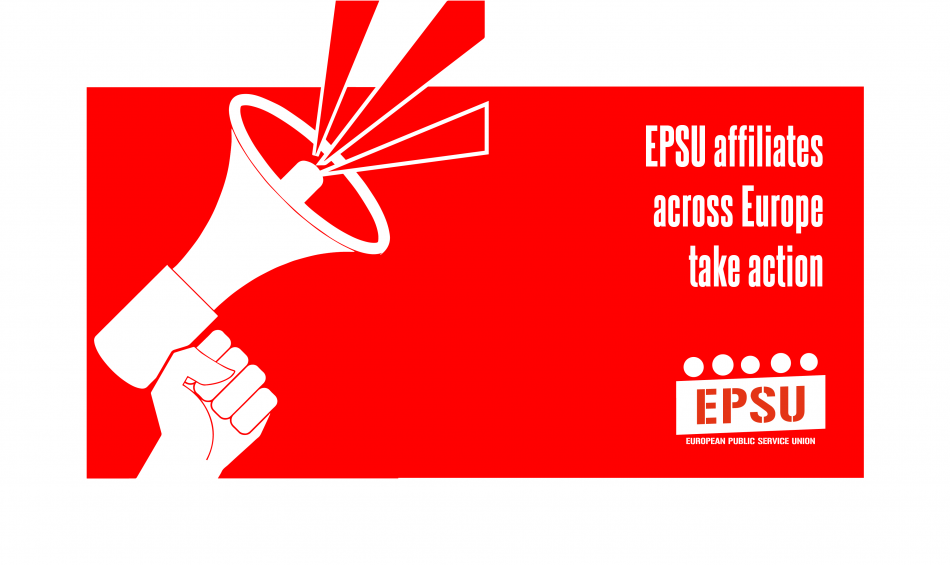 (23 March 2022) EPSU affiliates across Europe have been active in fighting for their members’ pay and conditions and employment rights with a range of actions taken or planned in the current period. Youth workers, labour inspectorate staff, early years education workers, patent office staff, local authority and health workers and other public service employees have joined or are set to join protests and industrial action.

EPSU sends solidarity greetings to all its affiliates standing up for public service workers. With inflation surging across Europe, trade unions will be determined to protect their members’ purchasing power and to ensure that they get the improvements in pay and conditions that recognise the efforts so many have made to maintain public services throughout the pandemic.

15 March – Netherlands: Youth care workers, members of the FNV trade union, took only the second day of strike action as part of their long-running campaign to get a better collective agreement for the 32000 workers in the sector and to address workloads, recruitment and retention.

22 March – Spain: Trade unions, including FSS-CCOO and FeSP-UGT, began a joint campaign of mobilization of staff at the Labour and Social Security Inspectorate. It aims to put pressure on the government to abide by a collective agreement that was signed last year and a 24-hour strike is due on 30 March.

21 March – Austria: Younion, representing staff in early years education and care (ECEC) in the public sector organised lively protests across the country in its continuing campaign to win improvements to the pay and conditions of workers in the sector.

22 March – Europe: Members of the SUEPO trade union at the European Patent Office (EPO) were on strike, calling for the restoration of fundamental rights at the EPO and the suspension or reversal of major reforms that have been detrimental to working conditions and wellbeing of staff.

23-24 March and after – Finland: with municipal employers failing to come up with a decent pay offer, local government unions have planned a series of targeted actions in addition to the ban on overtime and shift changes. Strike in two local authorities started on 23 March and nursing and health unions Tehy and SuPer were due to begin separate actions on 1 April.

25 March – Italy: The three public service federations – Fp-Cgil, Cisl-FP and Uil-Fpl – have organised a day of action across the country on 25 March in public health and local services to put pressure on the government to improve pay and implement an urgent recruitment plan to tackle understaffing across the sectors.

29-30 March – UK: Thousands of council workers in Glasgow in Scotland could be taking strike action unless the local authority responds to demands settle a dispute over equal pay that has emerged after the major equal pay settlement in 2019. Members of UNISON and GMB have already voted for the action and an announcement from Unite was due.

30 March – Ireland: Members of the Medical Laboratory Scientists’ Association (part of the SIPTU trade union) will take strike action unless the Department of Health addresses problems of low pay and understaffing.

6 April – Greece: The ADEDY civil service trade union confederation has called a national strike over pay, jobs and public sector funding. It argues that with inflation at a 25-year high of 7% public sector salaries need to be increased immediately.

Meanwhile, in Germany members of the ver.di trade union in social services and early years education are likely to be planning action in the lead up to the next negotiations due on 16 May. In the latest bargaining round the employers again failed to come up with a formal offer on pay for the 330,000 workers in the sector and ver.di warns that this is likely to generate a strong reaction from members.

The public service federations of the CCOO and UGT confederations organised a joint mobilisation of public administration workers on 29 November as part of their campaign for increased pay, more jobs and a return of rights lost during austerity. This followed a public-sector wide demonstration on 24 November with plans for further action on 14 December. The unions argue that services are under threat as 14% of jobs have been cut and reduced recruitment has created an ageing workforce where half are over 50. Since the 5% pay cut in 2010 there has been only a single pay increase of 1% while

The main public service federations - FP-CGIL, CISL-FP, UIL-FPL and UIL-PA - organised a demonstration in Rome on 12 December as part of a period of agitation to put pressure on the government to guarantee funding for the renegotiation of collective agreements for 2019-2021. EPSU general secretary Jan Willem Goudriaan joined the demonstration. The unions want to ensure there is funding for adequate pay increases and for the introduction of a new job classfication system. They are also calling for an extraordinary recruitment plan to address the urgent staff shortages across many parts of the