(26 August 2013) Following a deadlock in collective negotiations, and failure to reach an agreement during the subsequent mediation process, our colleagues of Genel-Is took the decision to call a strike for 26 July 2013. The two affected companies of Izmir Metropolitan Municipality, Izelman and Izenerji respectively tried to prevent this strike from taking place by appealing to the authorities. They used a reference to the Law on Trade Unions and Collective Labour Agreements that prohibit the strikes by some workers, including urban public transportation, and city water workers. The authorities settled the dispute unilaterally on 24 July by saying they concluded collective agreements two days before the planned strike took place. This foreclosed the workers’ right to strike, including those that are not subject to the Law on Trade Unions and Collective Labour Agreements. This action deprived the workers of a key instrument in negotiating their working conditions, even though the right to strike is foreseen in ILO conventions and the European Social Charter that Turkey has signed. So the companies violate these international standards. In solidarity with Genel-Is and the Turkish workers’ constitutional right to strike EPSU sent letters to the Turkish Minister of Labour and Social Security, the Mayor of Izmir, and the Higher Board of Arbitration.
Policies
Union Rights

Earlier this year the Council of Europe published its latest assessments of countries' compliance with its social charter and particularly article 6 on the right to strike. The report reveals that many continue to fail to conform with the requirements of the article and this is often related to significant restrictions on the right to strike particularly affecting public service workers. The latest list of countries not in conformity include: Croatia, Czech Republic, Cyprus, Denmark, Estonia, Germany, Iceland, Malta, Montenegro, Romania, Serbia, Slovakia, Spain and the UK. Further details can 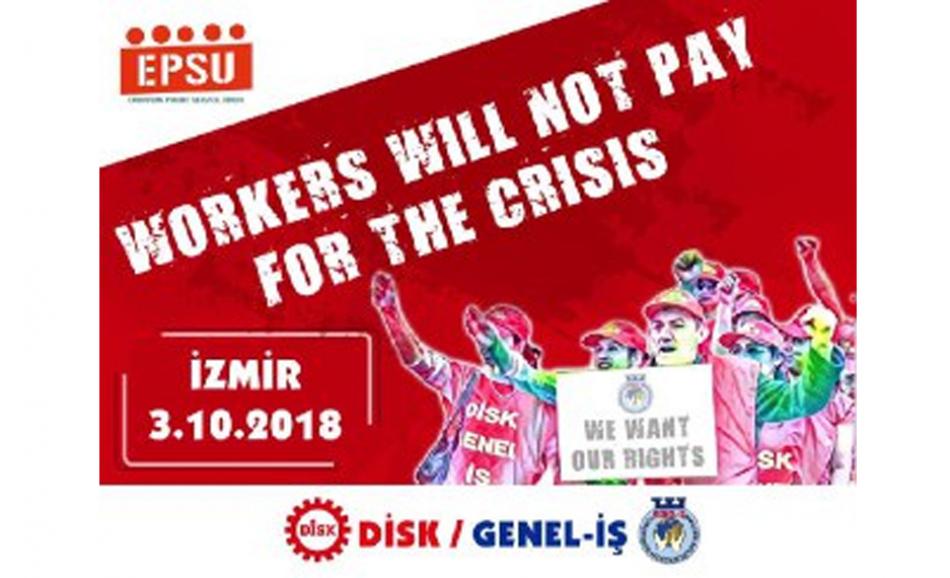 DISK, one of the Turkish trade union confederations, informed EPSU that the right of freedom of association and collective bargaining continues to be seriously curtailed since the military coup in 1980. A list of restrictions and obstacles remain, such as the obligation for an individual worker to
Solidarity
Union Rights