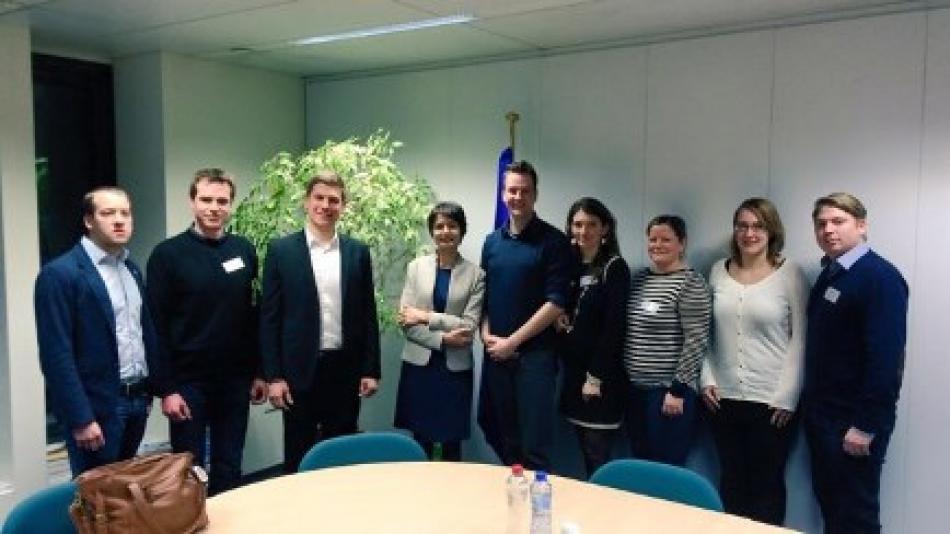 That was the message that young trade unionists took yesterday to Marianne Thyssen, European Commissioner for Employment and Social Affairs. The meeting was led by Thiébaut Weber, Confederal Secretary for Youth at the European Trade Union Confederation (ETUC) and attended by young representatives from the European Trade Union Federations. Michael Schuh, President of the EPSU Youth Network, travelled to Brussels from Austria for the day to represent the European Public Service Union.

The meeting followed by a request as far back as 2014 to meet with the Commissioner to discuss the future of youth employment policy at EU level and the involvement of trade unions and social partners in getting young people into work. Participants focused on two flagship initiatives introduced by the European Commission in recent years, as part of a push to tackle the youth unemployment crisis – the Youth Guarantee and Youth Employment Initiative.

The Youth Guarantee was introduced in 2013 to offer all young people under 25 a good quality job, apprenticeship, traineeship, or continued education within four months of them leaving formal education or becoming unemployed. However it remains a concern that many EU countries have not implemented it, and are not using the funds available for it. Young representatives sought assurances yesterday from the Commissioner that funding for such initiatives will be continued into 2016 and pushed for the full involvement of social partners, including trade unions, in their assessment and implementation.

It was positive to hear that Commissioner Thyssen is sympathetic to trade unionists’ concerns over the future of youth employment measures and that she would like to see greater involvement of social partners and young people in EU initiatives. However with youth unemployment figures remaining stubbornly high, young people’s futures will not be secured by good intentions alone. Trade unions want to see decisive action taken to ensure greater investment in jobs and training for young people, better enforcement of measures already in place and – importantly – a clear role for all social partners in future youth employment efforts. Yesterday was an important step in this process, but much more needs to be done.

The public service federations – Fp Cgil, Cisl Fp, Uilpa and Uil Fpl – want to ensure that as the move from obligatory to voluntary remote working takes place, all workers are provided with the appropriate protection so that they can enjoy the potential benefits and flexibility of remote working while helping to improve service delivery. The unions argue that workers should be guaranteed the same pay as those in the workplace, along with normal working hours and the right to disconnect. The federations acknowledge that the situation may vary across the public services and so negotiations may

A review of restructuring in the energy sector by the industrial relations observatory EIRO shows that workers have managed to secure job security agreements lasting between five and 10 years. These include companies which have been taken over by the Belgian, French, German and Swedish energy firms - Electrabel, RWE, EDF and Vattenfall. Read more at > EIRO