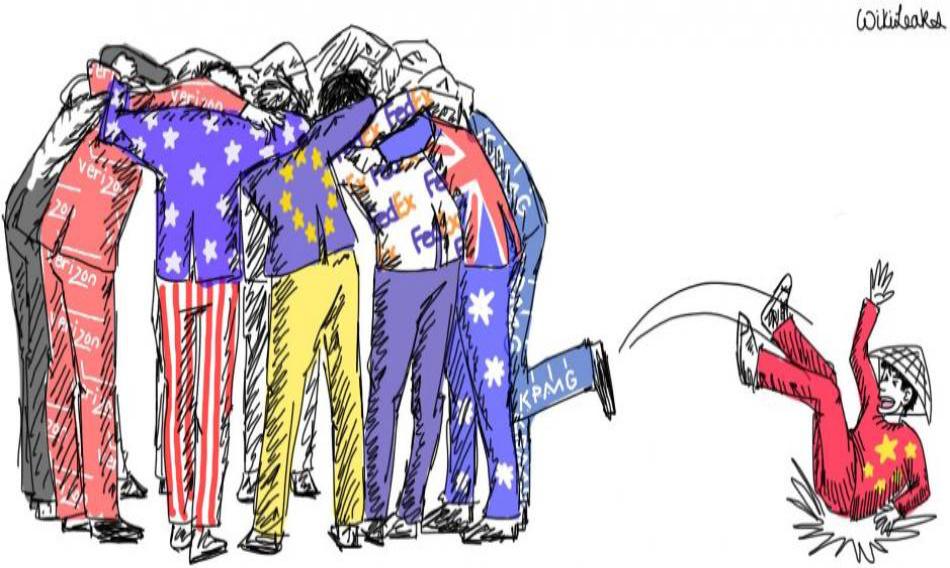 (14 October 2016) Joint TiSA Statement - Newly released Wikileaks documents make it clear that the Trade in Services Agreement (TiSA) is no more than a corporate power grab and that negotiations must be stopped.

The wide scope of the deregulatory agenda and attack on democratic governance has been exposed. The EU is attempting to wrestle control of every level of governance from the municipal to national levels of partner countries. The leaked documents demonstrate that the EU is demanding other TiSA parties to include and commit to the liberalisation of public services in the trade pact.

“These leaks give a clear indication of the dangerous direction of the TiSA negotiations. The fact that citizens and civil society are still obliged to rely on leaks for getting a sense of the direction of the negotiations is deeply unsatisfactory,” said Fred van Leeuwen, General Secretary of Education International (EI).

Delayed since 2013, negotiations to finalise the deal by the end of the year are set to continue Monday, 17 October in Washington, D.C. They cannot be allowed to take place.

“The EU position ignores the potential danger of exporting aggressive privatisation policies to the developing world, which have already been shown to be the cause of social and political instability in many EU countries,” said Public Services International (PSI) General Secretary Rosa Pavanelli.

The European Federation of Public Service Unions (EPSU)’ s General Secretary Jan Willem Goudriaan stated that “We strongly oppose the EU’s demand for market access in public services. Competition in these services undermines the build-up of quality public services in developing countries. The EU should not kick away the ladder to development.”

Oliver Roethig, Regional Secretary UNI Europa agrees and adds, “European politicians know too well that public services that all citizens’ have a universal right to is core to the development of sustainable economies. We cannot deny others, what we have relied on, and enjoyed ourselves.”

“It’s time to halt the negotiations, publish the secret texts and ensure the widest possible public debate to expose the full extent of the threat these treaties pose to democracy and the labour movement,” said International Union of Food workers (IUF) General Secretary Ron Oswald.

“The EU proposals only multiply the concerns the ITF has already voiced on the undermining of global standards and of decreased safety oversight, as well as over the loss of national control” said the International Transport Workers’ Federation (ITF)'s General Secretary Stephen Cotton.

In pointing out the EU’s contradictory positon to defend the European Social Model, UNI Global Union General Secretary Philip Jennings said that “The EU’s privatisation demands undermine other countries’ right to build sound public services, a stable financial system and local democracy. Not only is this unacceptable, it is hypocritical.”

Together, EI, PSI, EPSU, IUF, ITF and UNI call on all countries participating in the negotiations to immediately publish information about their position and demands on other countries, including the US, Japan, Turkey,  Australia and New Zealand, and begin national consultations with social partners and civil society.

TiSA negotiations must be brought to a halt. It is therefore urgent that you contact your government and demand both that it does not trade away your country’s sovereign, democratic rights, or rob the rights of other countries.

As Deadline Looms, WikiLeaks Reveals Corporate Demands from the European Union in the Trade in Services Agreement by Deborah James Published on Saturday, October 15, 2016 by CEPR Blog

"Demands by the EU to Lock in Privatization of Public Services in Developing Countries; Financial Services Deregulation; and Antidevelopment Provisions Revealed; Secretive, Antidemocratic Deal Must Not Be Rushed to Conclusion." Read more here, including links to leaked documents ...
http://www.commondreams.org/views/2016/10/15/deadline-looms-wikileaks-reveals-corporate-demands-european-union-trade-services

Despite trade unions offering to negotiate far-reaching reforms to the collective agreement in order to underpin job security, negotiations have stalled as local government employers are taking a hard line on both pay increases and changes to employment conditions. The unions say that pay rises of only 1% in 2011 and 2012 are inadequate with inflation expected to reach 2.5% in 2012. They also say that while they are willing to see changes to the collective agreement to allow more flexibility and mobility in the sector, they cannot agree to the employers’ plans to repeal all local employment

TISA: Lifting the Veil of Secrecy

PSI, in partnership with Our World Is Not For Sale (OWINFS) and the Friedrich-Ebert-Stiftung (FES), will be holding the very first global conference to provide a critical perspective on the proposed Trade in Services Agreement (TISA) in Geneva on 17 October 2014.
Trade
Apr. 12, 2011

Over the past three years the authorities in Scotland, Wales and Northern Ireland have introduced regulations that ended the privatization of cleaning services in hospitals.
Remunicipalisation