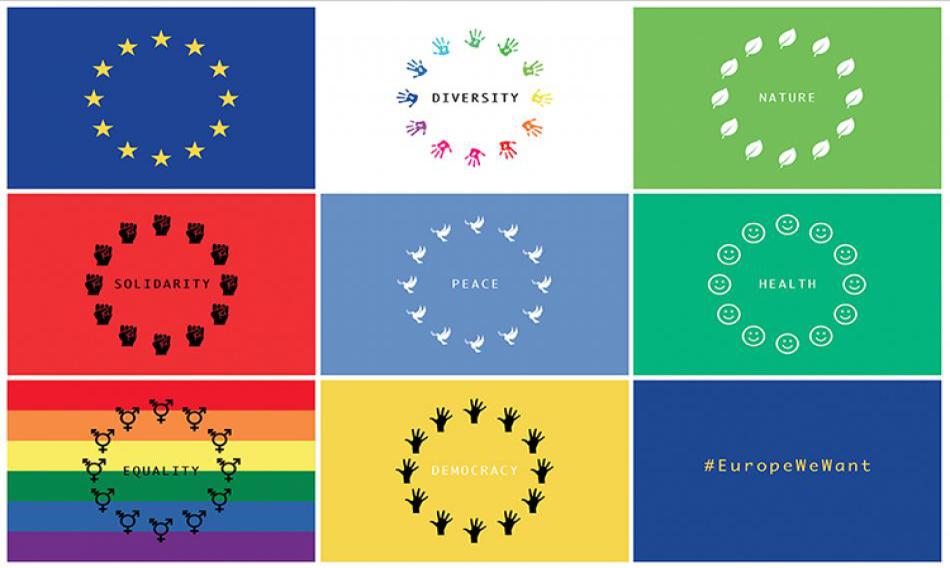 Brussels, June 20, 2017 – More than 250 non-government organisations from across Europe have released an alternative vision for a more democratic, just and sustainable Europe. [1]. We want to influence the debate on the future direction of Europe. Organisations from many different public interest issues, including labour rights, culture, development, environment, health, women’s rights, youth, and anti-discrimination groups endorsed it. This budget comes ahead of the summit of EU leaders 22/23 June. They will discuss key issues for Europe’s, including migration, security, jobs and Brexit. Indeed, this week marks the one year anniversary of the UK’s vote to leave the European Union (June 23) It propelled questions about the future of Europe up the political agenda.

The vision this group of organizations endorses, describes a future for Europe in which “sustainability sits firmly at the heart of the European project,” and the EU focuses on “democracy and participation, social  and environmental justice, solidarity and sustainability, respect for the rule of law, and human rights both within Europe and around the globe”.  We see it as an alternative to the proposals from European Commission President Jean-Claude Juncker, including five ‘Future of Europe’ scenarios which are currently being consulted on with member states with first conclusions due at the end of the year. [2]

[1] For the scenario and 257 organisations are supporting it ‘Scenario 6: Sustainable Europe for its Citizens’

[2] The European Commission's White Paper on the Future of Europe

For the ETUC Platform on the future of Europe

For the Press release

The Utilities sector faces many structural changes due to global developments, regulatory decisions and technological innovation and also the way public authorities and employers react to these changes.
Electricity
Environment/Climate Change
Water
Jul. 24, 2014

Climate change is the largest single threat to current and future generations. Many are seriously worried about these climate changes, which afflict everybody to different degrees. It is the poor
Water
Electricity
Environment/Climate Change