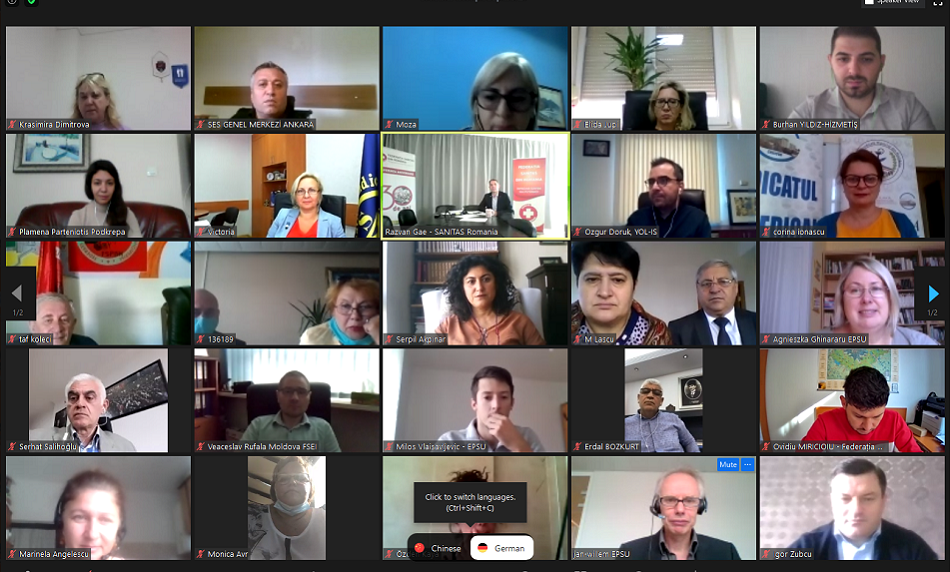 (6 October 2020) The pandemic is raging in several of the countries in the constituency. Moldova has one of the highest mortality rates for example.  The unions were reporting that not only many people have died of COVID19 but also a high number of public service workers especially in health and municipal services. The stories were similar for most of the other countries. As social protection networks are not always well established unions have supported their members and health workers. Turkish unions opened their holiday facilities for health and care workers so they could rest and be safe after long periods of hard work, for example. The crisis has shown many of the underlying problems in a stark day light. Some unions reported that they achieved additional pay only to see the government not respecting the agreement. Unions are preparing actions. Overall the health and social protection systems have been underfunded and some countries like Bulgaria has been asked by the European Commission to increase their funding.

The EPSU General Secretary briefed participants on the work EPSU and the unions are doing. We are demanding a reset of our economic model such that the interests of workers and our communities come first. The health and social service workers will organise a week of actions 25-30 October with a high point on 29 October, the global action day of the ITUC.

Several unions reported that due to the economic impact of the pandemic their finances were impacted and some local branches had to close. Others were able to reach out to members and show the work of the unions to protect workers. Union density remains high in several countries and sectors but in others it is on a downward slope. The declining membership was discussed with Milos Vlaisavljevic and Agnieszka Ghinararu responsible in EPSU for assisting unions around organizing and recruitment. Materials, guides and tools are now available. Union leaders and organisers can be coached and trained using a broad range of experiences from across unions in Europe and beyond.  Practical experience is available for developing and running campaigns. Training can be organized with unions in the same sector to share experiences, between countries or around specific themes. Important is that unions set targets so progress can evaluated.

Richard Pond responsible for collective bargaining in EPSU informed members of recent developments. He pointed out the work of the ETUC especially around the EU social partner consultation of the European Commission on fair minimum wages. The Commission’s workprogramme foresees that a legislative initiative will be published 28 October. EPSU will consider it in the EPSU Collective Bargaining Working Group foreseen for 5 November. He further informed about the collective bargaining campaign the ETUC is planning. EPSU affiliates can use this as an opportunity to demand the implementation of ILO Convention 151 on labour relations in the public sector or to demand that respect for collective agreements is part of public contracts.

For the EPSU Collective Bargaining Newsletter

Meeting documents (for members only)

The measures to contain the pandemic are leaving deep traces in the countries of North East Europe even though there are large differences.
Collective Bargaining
Recruitment & organising
Nov. 17, 2014

EPSU’s south east European Constituency meeting, which met in Sofia 28-29 March 2017, held in-depth discussions on the persistence of the gender pay gap and what could be done to reduce inequality through collective bargaining.
Economic Policy
Recruitment & organising