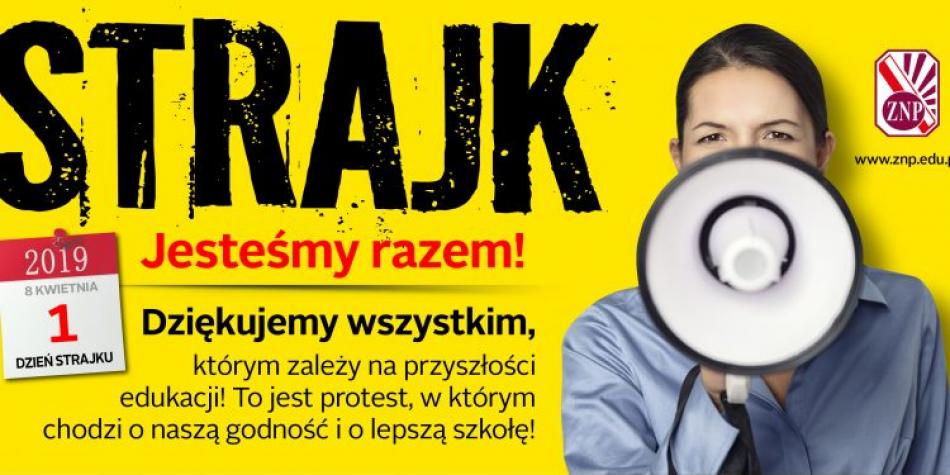 Teachers and other school workers have been on strike across Poland since 8 April in a determined effort to tackle low pay in the education sector.

EPSU has sent a message of solidarity to the education union which is leading the strike. The union says that a three-year-long campaign of demonstrations and protests has failed to get the government to move on pay in schools and with no solution following several weeks of negotiations, an all-out strike was the last resort. New teachers are paid as little as PLN 1751 (EUR 410) net and other school staff have similarly been suffering on low pay and lengthy pay freezes. The average starting wage for teachers is lower than many jobs that require less training.

In the lead up to the strike, a ballot of workers showed 80%-90% support among teachers, childcare staff and other workers in administration and services in schools.

The strike comes at a time when other public service workers are pushing for higher pay. Workers in the justice sector as well as physiotherapists and psychotherapists have taken action while there are pay claims being pursued by non-medical professions and other healthcare workers as well as staff in public administration and culture.

After three weeks the national strike by school staff has been suspended but the ZNP teachers' union is determined to maintain its campaign for more funding for education and better pay for teachers and other school workers. The union says that the first stage of the strike was a success in putting education at the centre of the national debate and highlighting the low levels of pay across the sector. While the union has secured a 10% pay increase it remains committed to higher pay as well as aiming for major reforms of the education system and getting a commitment to increased funding.

Teachers, childcare workers and school administrative and other staff began an all-out strike on 8 April following three weeks of negotiations with the government over pay. The negotiations also came after a three-year campaign of demonstrations and protests over low pay in the sector affecting both teachers and other school staff. With the government refusing to come up with a decent pay offer, support for strike action was very high, registering 80%-90% in some areas. The action comes at a time when other groups of public service workers are either taking strike action or pushing for higher

Public services union Fórsa has suspended industrial action by school secretaries planned to begin on 23 October. This was to be part of a long-running campaign to end a two-tier pay system that leaves most school secretaries earning just €12,500 a year, with irregular, short-term contracts that force them to sign on to receive benefits during the summer holidays and other school breaks. Following a commitment from the government the union has agreed to talks at the Workplace Relations Commission which will begin on 27 October.