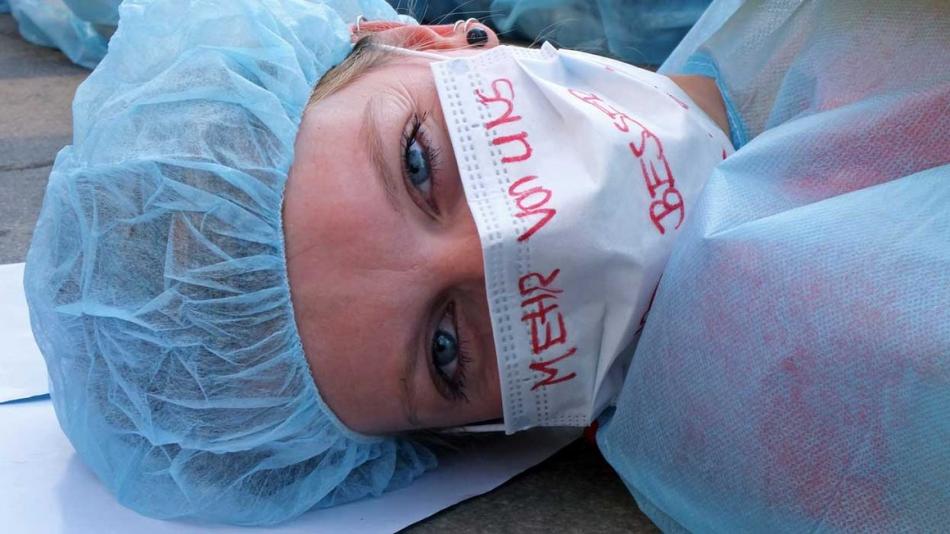 (14 September 2017) On 18 September 2017 and in the weeks to follow health workers in Germany will mobilise to get mandated staffing levels and to achieve substantial progress as to the reduction of workloads and stress at their workplaces. It is the start of a series of mobilisations and strike actions organised by ver.di prior to and after the German Federal Elections on 24 September 2017. The coalition agreement signed by the current Federal Government foresees the definition and implementation of mandated staffing levels, but the related legislation is not yet there.

On the occasion of the kick off of the union actions EPSU General Secretary stresses "the fight for effective and safe staffing levels is a common one in Europe. Workers in health and social services want an end to burn-outs and recognition and respect for their hard work".

A survey run by ver.di in 2015 revealed evidence that in Germany about 162,000 workers are lacking in health care (out of which about 70,000 frontline workers directly working with the patients at the bedside). Patients and workers are suffering from this continuous understaffing. On behalf of millions of Europe’s workers in health and in social services, EPSU expresses its solidarity with the struggle of the German health workers for better pay and conditions and for more staff.

Mobilisation to get more personnel and to reduced stress and workloads for those working in hospitals has gained momentum in Germany, building on the long-standing work by ver.di. We see in many countries the same struggle for more staff in health care. Together with many trade unions in Europe EPSU works to put the well-being of workers and patients centre-stage. We know that together we can achieve our goals and improve the lives of workers and patients. “There is power in a union“ to achieve mandatory staffing levels in health and social care, one of EPSU’s priorities for the health and social care sector.

After the third round of negotiations produced no further offer from the local and federal government employers, the ver.di public services union has called for arbitration to try to make progress. The union says that the 120,000 union members who took part in the recent sequence of warning strikes have made it clear that they want a reasonable offer from the employers in response to the union’s demand for a pay and conditions package worth around 5%. Strike action will be suspended during the period of arbitration. Read more at > ver.di (DE)
Dec. 20, 2016

This webpage is the "entry door" to the EPSU/PSI Online Platform on Safe and Effective Staffing. From here you can access both the publicly accessible section and the password-protected section reserved for the national affiliates of EPSU and PSI.
Health
Social Services
Apr. 05, 2017
2017 April epsucob@NEWS 06

Negotiating successes for ver.di in health and social care

(April 2017) Services union ver.di has signed a key agreement in Bremen that covers around 3200 eldercare workers employed by several non-profit care providers. The union sees this is as a significant step towards better collective bargaining coverage in the sector and helps remove pay and conditions as a factor in competition. Meanwhile the union has also negotiated two new agreements in the health sector, one provides a 7,3% pay increase for 3900 workers at the University Hospital in Leipzig and the other is a 5.1% pay increase for the 24000 employees in 36 hospitals run by the Helios company.