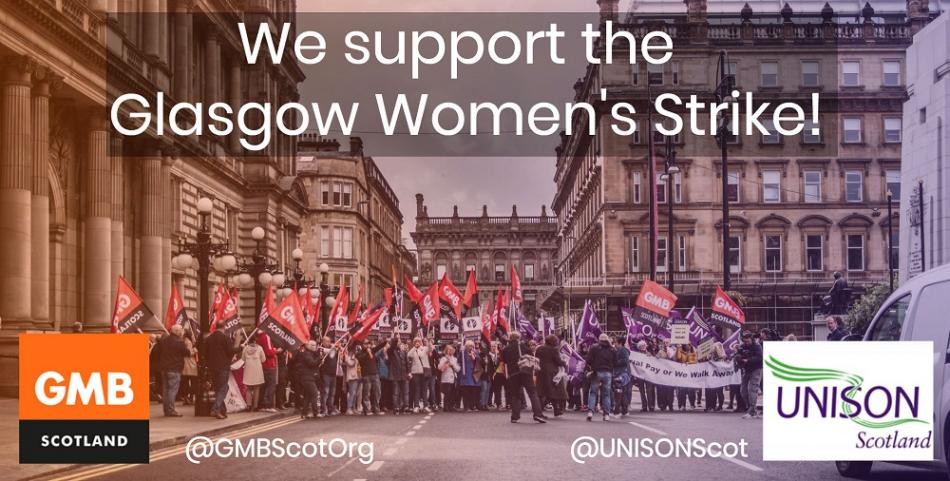 Today and tomorrow (23-24 October) in Glasgow thousands of women municipal  workers are taking part in a strike in support of equal pay.

The decision to take strike action comes after a 12-year battle to change the city’s discriminatory pay system that undervalues women’s work.

A new pay and grading scheme introduced in 2006 was supposed  to end to pay inequality based on gender. Instead, it’s implementation introduced new discriminatory measures.  Women in traditionally female jobs  – such as caterers, cleaners and care assistants – still found they were being paid less than men in traditional men’s jobs, even though the jobs were of equal value and should have been paid the same.

Around 8,000 women including school administration workers, learning support workers in schools, nursery workers, home carers, cleaners, caterers and other council workers are joining the strike, believed to be the largest industrial action of its kind for over 40 years.

The strike is a timely reminder that much more needs to be done to tackle the undervaluing of women’s work.  EPSU’s recent report  entitled “She works hard for the money – Tackling low pay in sectors dominated by women” investigates the extent of and driving factors behind low pay in health and social care sectors in the EU and trade union responses.  The report also makes the link with the need to secure public investment through fair and progressive taxation  in order  to ensure quality public services and decent work for public sector workers can be a reality.

In the UK wages of local government workers have been particularly hard hit because of austerity and public spending cuts.

EPSU supports wholeheartedly the actions to stand up for women and to demand quality jobs for all workers delivering much-needed municipal services!

Union gears up for negotiations

The FOA trade union is gearing up for the public sector pay negotiations over a new collective agreement to follow the current agreement that expires in March 2021. There had been some discussion about postponing the negotiations but they will now go ahead with unions expecting tough bargaining conditions. Public sector wage increases are linked to developments in the private sector and so there will be some constraints but unions are determined to secure pay rises for their members and the FOA is stressing again the need to support low paid workers who have been less advantaged by pay