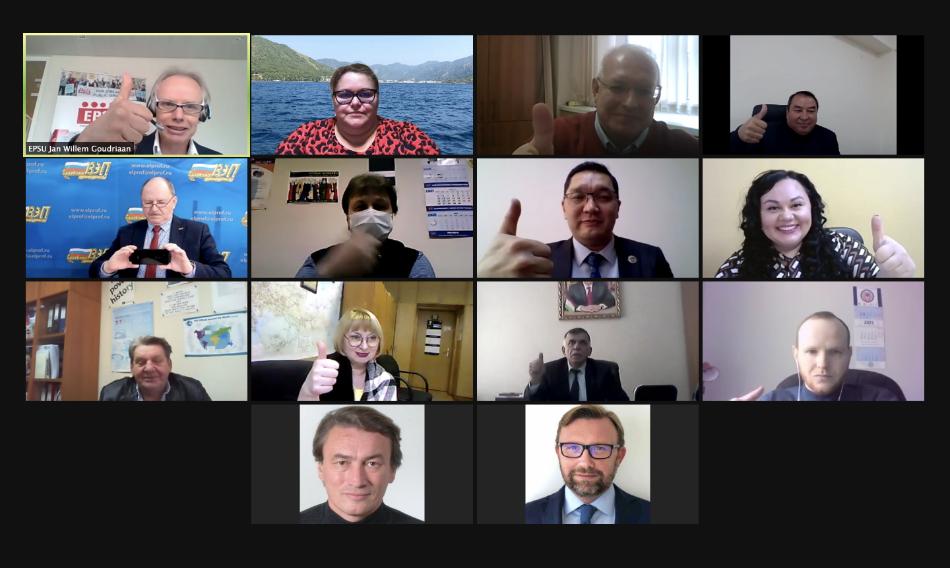 (7 April 2021)  The impact of the pandemic is very different with Russia, Kazakhstan and Kyrgyzstan having experienced grave problems while Uzbekistan and especially Tajikistan did not have the same challenges. Excess mortality is high in Russia and the government has increased spending on health and including for salaries. To cope with an increase in the number of patients new hospitals are built in Kazakhstan. But the economic consequences of the pandemic have hit all the countries hard. Vaccinations are underway although unevenly as Kyrgyzstan is lagging behind. The countries are using the Russian and Chinese vaccines. According to data from the unions over 1000 health workers died in Russia and nearly 120 in Kazakhstan. Unions are promoting vaccination and leaders like of our affiliate in Kazakhstan are regularly in the news. All unions have undertaken vast efforts to support their members including through buying personal protective equipment in the first period of the pandemic and later provided food and other assistance for example.  The ILO supported the social partners and government in Tajikistan how to address the pandemic and the World Bank provided funding for the vaccines.  Across the countries unions are seeking the recognition of COVID19 as an occupational disease and additional pay for workers that have been in the frontline including in municipal services and in the energy sector. Some unions noted new efforts to undermine public services through social entrepreneurs while others reported agreement with the employers not to reduce the number of workers during the pandemic.

The EPSU General Secretary introduced the priorities of our work. Our health and care and our social protection systems need to be built. Across Europe unions demand investment and funding for our public services. The impact of austerity through years of underfunding has now played out with a lack of sufficient staff and resources. Unions say no to austerity. Unions are playing a major role in keeping workers safe and demanding from the employer safe workplaces. Unions have negotiated additional pay for health workers doing such a great job. Often benefits have not been extended to other groups of health and care workers and unions are demanding higher wages for all. We do have concerns over new labour legislation which could undermine independent unions in Kyrgyzstan. The country went through much turmoil after the elections last year. And while the health union in Kazakhstan is recognised as an effective operator for workers the government keeps its pressure on the union limiting its potential. The General Secretary also drew attention to the Pan-European Commission on Health and Sustainable development of the WHO European region. It will look at the lessons that can be learned. It will make recommendations on investments and reforms to lift health and social care to a priority for governments.

Richard Pond joined the meeting to discuss telework or remote work, which came to the fore with the pandemic. Before it had not been such a big issue in the constituency. He referred to EU level agreements, the guidelines on telework of the European Occupational Safety and Health Agency. There might be a permanent shift to home work and this can give rise to many questions including with which other workers to compare. Several affiliates like in Spain and Belgium have now concluded agreements on this while unions in Italy and France are dealing with the right to disconnect and ensuring that working time rules apply. Olga Zhankevic introduced the agreement reached in Russia. Telework was hardly regulated but since the 1 January there is a new law. The unions were consulted. Also in Uzbekistan there are industry wide and workplace level agreements in the public sector. In the private sector so such agreements were reached. The unions secured that when a worker can not work remotely, and the office / work place is shut down salaries are paid in full. Richard mentioned a number of projects forthcoming including training and with PSI a compendium on collective bargaining practices dealing with telework. He further informed that the Factsheets on the right to strike will cover the countries of the constituency making it one of the most comprehensive overviews of the right to strike.

The latest global wage report from the International Labour Organisation reveals the main trends in pay and minimum wages, highlighting the impact of the COVID-19 pandemic in the first half of this year. It notes a downward pressure on the level or growth rate of average wages in two thirds of the countries for which recent data are available. In other countries, including France and Italy, average wages increased, largely artificially as a reflection of the substantial job losses among lower-paid workers. The report also shows that women workers and low-paid workers generally have been

(February 2015) {{Legal minimum wages play a very important role in countries in Eastern Europe and particularly Russia, Kazakhstan, Kyrgyzstan and Tajikistan. EPSU affiliates in the region are active with other unions not just in pushing for increases in the rates but in debates about the content
Collective Bargaining
Jul. 28, 2020
2020 EPSU Collective Bargaining News August no.15

Data from the Wage Indicator pay database covering five countries reveals that many of the key workers who have been on the frontline in the fight against COVID-19 are on below)average wages. The research looked at nine jobs in childcare, call centres, retail, nursing, admin, logistics, warehouses and transport in the UK, German, Netherlands, France and Sweden. In the UK all occupations fell below the national average wage while in Germany it was all but one and in the Netherlands all but two. The situation for these workers was better in France and Sweden.