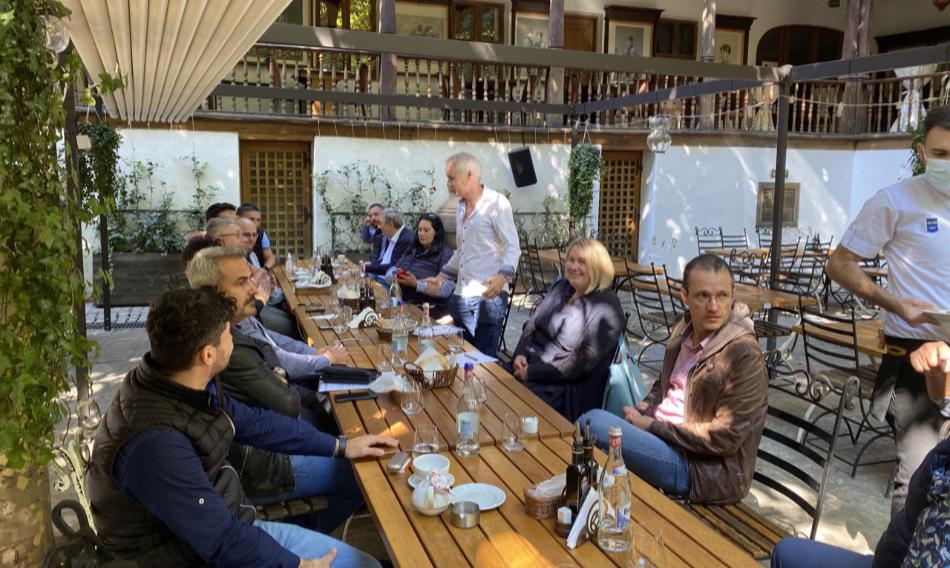 (14 September 2021)  Collective bargaining has been under pressure for years in Romania. Sectoral bargaining has been made very difficult. More recently the government undermined the social dialogue by transforming in a mere information process. The pandemic was used to prevent larger demonstrations and limit the right to strike in many sectors. These limits will soon come to an end and negotiations will start in many companies and sectors.  The EPSU General Secretary met with the Romanian unions to discuss these problems and explore common approaches including a possible mission of the European trade unions led by ETUC. The government is currently in a fragile state a ministers of one of the parties left the government including those responsible for health and transport. With vaccination levels slowly going up, the government wants to impose mandatory vaccination of certain groups of workers. Unions voiced opposition to this. He also met with the suspended leader of ATU. The union is involved in a battle with the government following the union’s opposition to the dismissal of workers in the metro and the spontaneous walk-out to protest these plans. ETF and EPSU have been supporting the union.

The unions discussed the preparation for Congress and a delegation of EPSU visited various places to explore their suitability for the Congress in 2024. Bucharest will be a very interesting city for the trade union delegates and Romanian unions will welcome all with open arms and great expectations. The visit took place on 8-9 September 2021.

For the support of ETF and EPSU for the ATU union.

For more on the state of collective bargaining in Romania.

Collective bargaining is key to delivering quality employment and this was at the centre of the final debate at EPSU's Quality Employment conference last week. Silvia Fernández García of FSC-CCOO in Spain, Kevin Callinan of Fórsa in Ireland and Marie-Louise Knuppert of OAO in Denmark joined the panel discussion to reflect on how collective bargaining had developed in recent years in their countries. Both Silvia and Kevin described the impact of austerity and the cuts to pay and conditions faced by public services workers. However, they were also both able to describe how their unions had

Social dialogue and public services in the aftermath of the economic crisis – strengthening partnership in an age of austerity This was a six-country research project coordinated by Professor Stephen
Collective Bargaining
Dec. 21, 2011
2011 December epsucob@NEWS 21

The Greek government has been pushing through a number of labour relations reforms as part of the austerity packages that have been forced upon the Greek people by the International Monetary Fund, European Central Bank and European Commission,. The reforms included the annulment of collective agreements. The unions have complained about these measures to the International Labour Organisation (ILO). The ILO sent a High-level Mission to Greece to consider the application of a number of Conventions which were violated. The Committee of Experts on the Application of Conventions and Recommendations