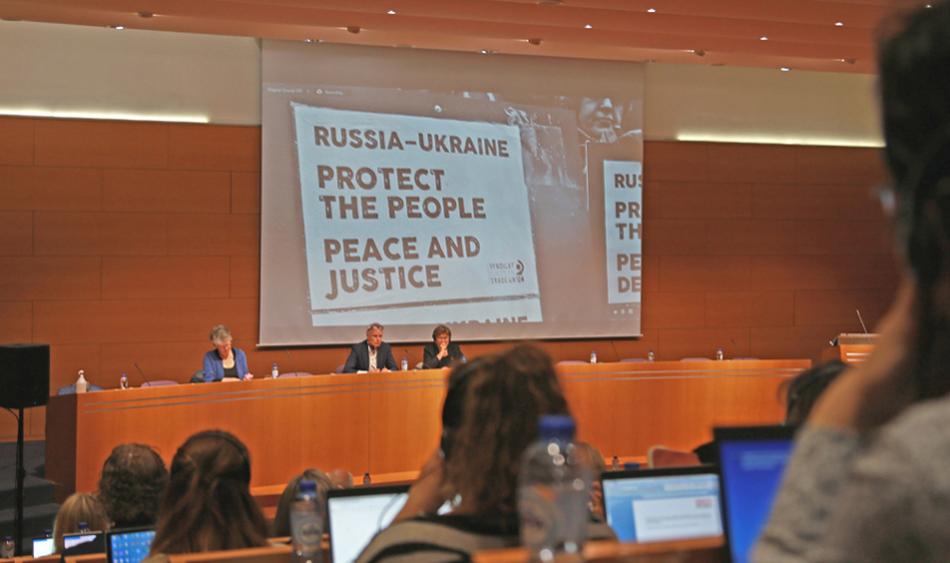 (9 May 2022) The Executive Committee approved the report of activities. It shows the work of affiliates and the Federation during the year like on Public Service Day 23 June and Global Care Day 29 October. It is available in English, French, German, Spanish, Swedish and Russian.

Executive Committee takes important decisions – and dates of the next Congress

Europe’s public service union leaders met for the first time physically in 2,5 years. What could have been a joyous moment, was overshadowed by the war in Ukraine. The Russian army invaded the country on 24 February. It resulted in destruction and thousands of deaths. Part of the country are occupied. There is a massive displacement of people fleeing violence and the Russian army, both inside the country and to neighboring countries. Public services and infrastructure is destroyed. There is systematic violence against women and girls. The aggression and continued fighting have a profound impact on peace and security arrangements in Europe. It has major consequences for workers in all European countries.  This is clear in Ukraine but impacts workers in Russia, in neighbouring countries and far beyond through general insecurity, redirection of public resources towards militarisation, and rising prices for energy and food for example. Ukrainian trade union colleagues gave an insight in the impact of the war on workplaces, on working families and their communities via a video link. EPSU, PSI and the entire global union movement condemned the invasion. The EPSU Executive Committee demands the end of hostilities and the withdrawal of all Russian troops from Ukraine. We discussed the solidarity that is provided by workers and the unions in Europe and across the world. Members of the Executive Committee agreed a proposal of the leadership of the Federation to suspend the work with the Russian unions.  It is important to stand up for the values and aims of the Federation. This is not happening and the current circumstances including in Russia make this difficult.

The Executive took a similar decision with regard the work with the affiliate from Belarus (Trade Union of Healthcare Workers of Belarus). This was aggravated by the lack of protest against the arrests of the entire leadership of the independent trade union confederation BKDP and several of its affiliates like SPB on the 19th of April. Several leaders remain in jail. The Executive approved the recommendation to affiliate the SPB which organises medical workers.

Unions will take action in different ways to celebrate the work of the members, to resist privatisation and commercialisation, and to act action for higher pay and better conditions. With the Belgian affiliates and Dutch union FNV an action will take place in Brussels focusing on the Commission and Members of Parliament.

Members discussed the contribution of EPSU to the ongoing review of the Social Dialogue. The European Commission is doing this review with a communication expected after summer. This communication will set out the position of the European Commission on the Court case of EPSU vs Commission. EPSU is stressing that the Commission needs to clarify the framework for agreements between the employers and the trade unions and provide transparency and clear criteria. The Communication will address the sectoral social dialogue as the Commission seeks to cut resources and rationalise the social dialogue committees. The union leaders were critical of the continued defunding of the social dialogue committees and pushing the burden to the social partners.

Members of the Executive Committee want a strong EPSU that is capable of realising our work and having an impact on the decisions that influence workers in our sectors, our families and our communities. It agreed a proposal from the Finance Working Group for a limited increase of the affiliation fees. This takes account of rising inflation and the Belgian system of indexation of wages. It stressed the importance for the Federation to continue to use the opportunities offered by digital means for our activities. The Programme of congress 2025-2029 needs to be aligned with a discussion about the resources and priorities.

Dates of the next Congress

The Romanian affiliates invited the Federation to hold its 11th Congress in Bucharest.  The dates were announced 17-20 June 2024. Preparation will start with first major discussions at the EPSU Executive in November. All are looking forward to meet the Romanian comrades.

With the ETUC we are working on a large number of legislative issues: Adequate Minimum Wages, Protection of Digital Platform Workers, Due Diligence, Addressing violence against women and policy issues like the Social Economy Action plan, EU recommendation on Minimum Income and the high level work group on the future of the Welfare State.  Important for EPSU are the discussions on the review of the European Economic Semester and economic governance and the use of the Resilience and Recovery Funds. Too few resources end up strengthening  health and care while the pandemic has underlined how underfunded these services were. EPSU was successful in addressing repro-toxins and hazardous medical products in the updated Directive on Carcinogens and Mutagens, in working with the EFBWW to lower the exposure limits to asbestos and in securing that Covid19 is seen as an occupational hazard for care workers in the relevant EU classification.

Members received reports on policies and work with employers in the different EPSU sectors like health and care, utilities, central government administrations, local and regional government. The Executive was updated on the work on the social dialogue committee social services and confirmed the position of EPSU about a recent global framework agreement with Orpea. We welcomed the President of the ETUC Women’s Committee and the update on the work of EPSU on the Gender Pay transparency directive.

The meeting was chaired by the President Mette Nord. It took place 4-5 May 2022, Brussels. The next meeting is 25 and 26 October.

and our photos album

A new toolkit is now available providing a wide range of practical examples of how trade unions and employers have tried to tackle gender inequality at work. The case studies cover a variety of initiatives from work-life balance, to assessing the gender pay gap and action to increase the recruitment and promotion of women in occupations and sectors dominated by men. [Read more at > ETUC-> http://www.etuc.org/press/toolkit-gender-equality-practice-100-best-practices-gender-equality-work] [And in French at > CES->http://www.etuc.org/fr/presse/bo%C3%AEte-%C3%A0-outils-pour-l%C3%A9galit%C3%A9

Armenia | Trade union: HWUA | Sector: Health and social services | A gender analysis of the situation in all spheres of public and socio-economic life is being conducted with
Equality
May. 09, 2022