Public Services in Bilateral Free Trade Agreements of the EU 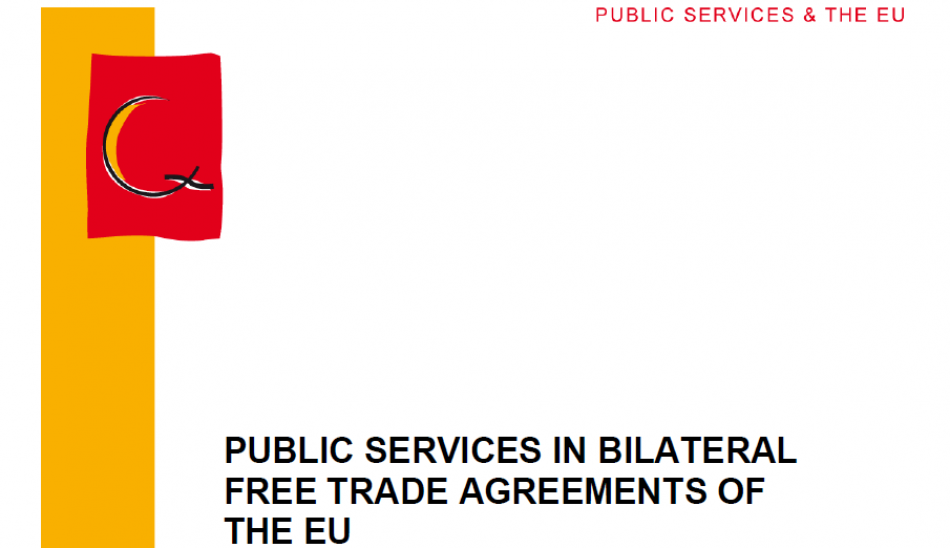 The impact of international trade agreements on public services has been a controversial subject for a number of years already. Generally, the obligations of trade agreements limit the ability of governments to choose freely between different regulatory instruments and techniques for the organisation and provision of services considered to be essential for the general public such as network communications, energy and water distribution, education, health and social services. With their focus on market access and competition, liberalisation commitments in trade agreements put domestic policy makers under the pressure to consider only measures which are in conformity with these agreements (“regulatory chill” effect) and effectively bind governments to the current level of liberalisation which makes a review and reconsideration of liberalisation measures difficult (“lock-in” effect).

These issues have recently become subject of renewed attention as the EU is currently negotiating bilateral trade agreements with a number of strategic trading partners. The EU Commission would like to abandon the traditional model of safeguarding regulatory space for public services which was applied for the first time in the GATS context. This model is based on a horizontal limitation clause for “public utilities”.

The paper reviews different ways of reducing the impact of trade agreements on public services and assesses their potentials and limitations. The study analyses approaches used in the GATS and NAFTA contexts as well as in free trade agreements of the EU and other countries. As a result of this analysis the paper concludes that existing models are deficient as they do not adequately reflect the dynamic nature and necessary regulatory flexibility for public services. The paper therefore proposes two reform options which could be further discussed and studied. The first is based on the current logic of trade agreements while the second is more-fare reaching and suggests a simplified procedure for the modification of specific commitments.

No progress made to stop killing of unionists. The Congress of the European Federation of Public Service Unions (EPSU) voted a resolution deploring the fact that Colombia was the most dangerous place in the world to be a trade unionist in 2009.
Trade
Sep. 08, 2011

7 November 2011: Seminar of the Pitfalls and Prospects for the Protection of Public Services in Bilateral Free Trade Agreements.
Trade