The EPSU establishes the following procedure only for those cases where the EPSU is involved and where there is a clear intention and commitment of both parties to reach an agreement. This does not apply to the existing consultation processes already taking place at EPSU level. This procedure in fact only indicates structures and procedures to follow and does not point out what topics or content those negotiations are dealing with. When a company indicates its intention to start negotiations, or the EWC or the trade unions involved in the company express such a wish, then the following procedure should be respected:

1. A complete information and consultation round shall be organised involving the trade unions involved in the company, the EPSU Secretariat, EWC select committee and the EWC. The trade unions involved should agree to start the negotiations. They should do this preferably in a unanimous way. If unanimity cannot be reached then the decision should be taken by at least a two-thirds majority in each country involved. Nevertheless, a country that represents 5% or less of the total European workforce cannot block a decision to start negotiations. The decision shall be made following their national practices and traditions (but the EPSU asks affiliated trade unions to clarify the methods used in each country to reach such a decision and inform the EPSU of this method).

2. The mandate for these negotiations will be decided on a case-by-case basis. The mandate shall be given by the trade unions involved, and should preferably be unanimous. If unanimity cannot be reached then the decision (following their own national practices and traditions) should be made by at least a two-thirds majority in each country involved. Nevertheless, a country that represents 5% or less of the total European workforce cannot block a decision to start negotiations. The mandate should include:

b. Details of how the negotiation process will take place and the composition of the complete negotiating/ monitoring group.

The negotiations should aim for a signed agreement.

This mandate shall be sent to the EPSU Secretariat to ensure that it is in compliance with existing EPSU policies.

In the case of other European Federations being involved, we should strive towards a joint mandates paper. Decisions on the mandate paper and final result of the negotiations remain those of EPSU (the affiliated unions concerned)

4. The negotiating team will present the draft agreement to the complete negotiation group for evaluation. This draft agreement will be approved by the trade unions involved. They should do this preferably in a unanimous way. If unanimity cannot be reached then the decision should be taken by at least a two-thirds majority in each country involved. This decision-making process will again follow national practices and traditions.

No union should sign a transnational agreement if the Federation (that is the affiliated unions concerned following the above process of decision-making) has decided not to sign. Decisions of the Federation are hence binding. If it still happens, it will be brought to the attention of the Executive Committee which will decide which measures to take

5. The EPSU in the person of the General Secretary or Deputy General Secretary, or another person mandated by them, shall sign the agreement on behalf of the trade unions that are involved in the company at the time of signing. In case of take-overs, mergers, acquisitions, it has to be decided if unions representing workers from these ”new” companies adhere to the agreement as well.

6. All trade unions involved shall agree to implement the signed agreement. The agreement shall be implemented in accordance with the national practices of the countries involved. Implementation must respect the legal framework and the collective agreement system of these countries.

7. Full information on any signed agreement shall be given to the Executive Committee and all relevant Policy Committees.

8. The decision-making procedures will be reviewed following experience and after a certain period of time or at minimum after the agreement/ implementation of four transnational agreements, whichever comes first

EPSU is the European Federation of Public Service Unions. It is the largest federation of the ETUC and comprises 8 million public service workers from over 250 trade unions; EPSU organises workers in the energy, water and waste sectors, health and social services and local and national administration, in all European countries including in the EU’s Eastern Neighborhood. EPSU is the recognized regional organization of Public Services International (PSI). For more information on EPSU and our work please go to: http://www.epsu.org

Following detailed discussions in the utilities standing committee over a period of three years, a procedure for negotiating transnational agreements was debated and approved at the EPSU Executive Committee meeting on 9-10 November. Increasingly agreements have been signed with multi-national companies, often by European works councils, but European Federations like EPSU, following the initiative in the European Metalworkers Federation, have been working to establish procedures that give a clear role for trade unions in the process.
May. 12, 2017
2017 May epsucob@NEWS 08

(May 2017) Trade union reps from subsidiaries of the social care multinational Orpea came together in Brussels on 4-5 May to discuss common problems and how to improve coordination and potentially initiate moves to setting up a European works council. Participants debated the pressure of increased workloads and the role of profit-seeking multinationals in providing social care. 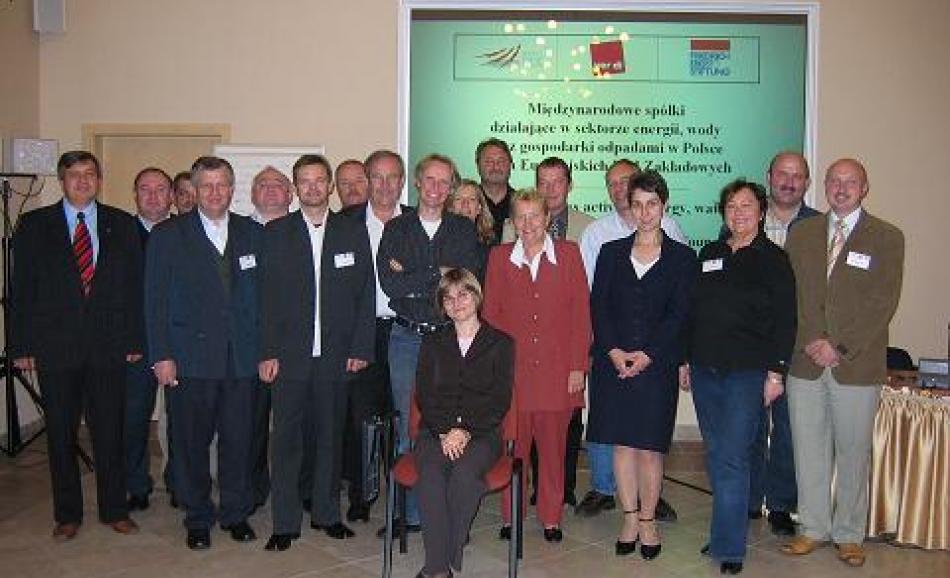 Polish utilities are one of Europe's prime battlefields for foreign operators.
Company policy and EWCs
All PoliciesAll Policies