Outsourcing of public services often has more of an impact on the low-paid and predominantly women workers as it is often services like cleaning and catering that are the first to be outsourced. Trying to protect the pay of women workers employed by outsourcing companies is a further challenge for trade unions.

To date it has often been possible to prevent outsourcing. Outsourcing is currently an important issue, especially in cleaning and kitchen work where most workers are women. The main impact of outsourcing is that collective agreements come into force with lower wage rates.

Fight for women in outsourced companies that the gender wage gap there doesn’t increase.

There have been several occasions where the Union has held negotiations with employers centring on the outsourcing of utility services to private companies. However, these negotiations involved all the employees affected, regardless of gender. Generally speaking, the outsourcing of certain services (such as cleaning and facility management) results in reduced pay for workers, regardless of gender.

The Wages Commission’s account does not determine whether outsourcing will have any effect on conditions of pay between men and women or not.

No surveys have been carried out on the impacts of outsourcing. The results of unofficial enquiries to union chairpersons have shown that, for example the permanent layoffs resulting from university sector changes and in connection with privatisation during 2009 and 2010 have primarily affected female-dominated support functions.

In the nuclear sector, for example, the majority of activities that are outsourced are essentially dominated by women, so the policy has a signficant impact on women’s access to employment. This exacerbates the precariousness of women’s work.

The issue of outsourcing is one that has for years caused us major problems because outsourcing is widely used as a means of bypassing the applicable collective agreement and paying excessively low wages. Ver.di has attempted to curb this trend towards outsourcing via the TVöD and the possibility of introducing a new wage group 1 with lower rates of pay at the bottom of the pay scale as well as further lowering wage groups 2 – 4, thereby remaining within the current collective bargaining framework. In this it has had varying degrees of success and has come under pressure from employers who attempt to use the reduced wage group 1 for more and more occupational groups – a move that impacts particularly upon jobs typically done by women. This provision is highly controversial even within ver.di itself. According to our own calculations, in 2007 there were 6,572 workers in wage group 1; of these, 5,104 – i.e. more than 77% – were women. By 2009 the number of workers in wage group 1 had risen to 12,654. This number includes 9,308 women. The percentage of women is 73.5% and is therefore somewhat lower than two years previously. It is striking to note that the total number of employees in wage group 1 has doubled. This may be due to the introduction of the minimum wage for cleaners, which has resulted in local authorities resuming responsibility for cleaning services in some places.

| Trade union:Abvakabo | Sector: Public sector |
In this issue no difference occurs between men and women.

No special knowledge concerning this in connection with questions of equal pay.

No, not related to equal pay

After the outsourcing of some services we manage to negotiate the maintaining of the jobs and wages.

This is not common in health care sector, we don´t have information and experience

Our experience with outsourcing is that it initially produces no change in pay scales or conditions of employment. However, we found that ownership changes following the initial outsourcing can lead to pressure downwards on wages, particularly in female-dominated occupations. Male dominated groups are commonly found in technical occupations which makes it easier to claim wages with reference to the market.

The outsourcing of any service within the FRS has a particularly negative impact upon women as the provision of good policy, practice and procedure in workplaces for agency, temporary or privatised workers are often not covered by relevant protective legislation.

Adopted by the Standing Committee on Local and Regional Government, 23 May 2006 -* Excluded services - an agreement on outsourcing could specify services which the employer would be committed
Local government
Outsourcing
Jul. 31, 2019 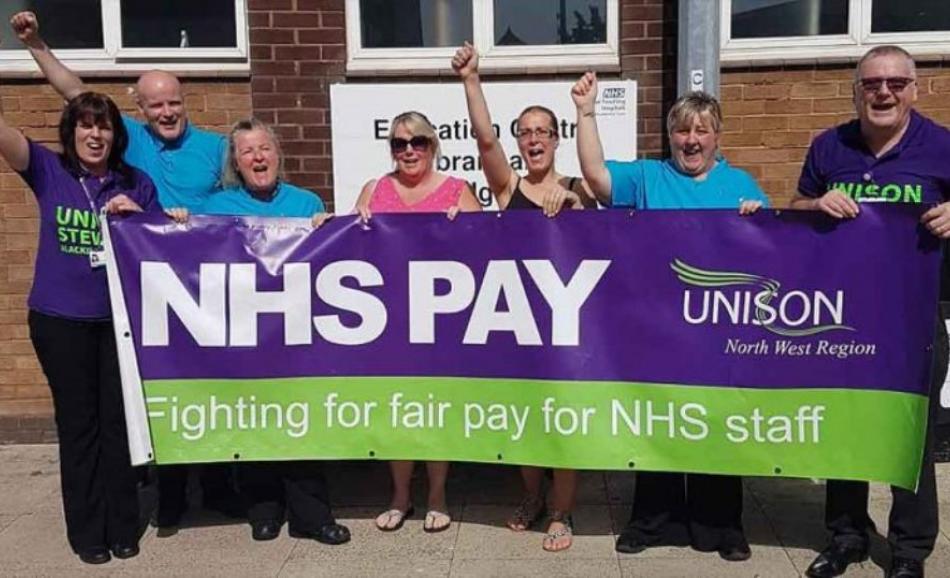 EPSU sent a solidarity message today to hundreds of health workers on strike in three hospitals in North West England. The workers – cleaners, porters, catering and security staff – are employed by the multinational Compass and want their pay and conditions to match those of the directly-employed National Health Service (NHS) workers whom they work alongside.
Outsourcing
Privatisation