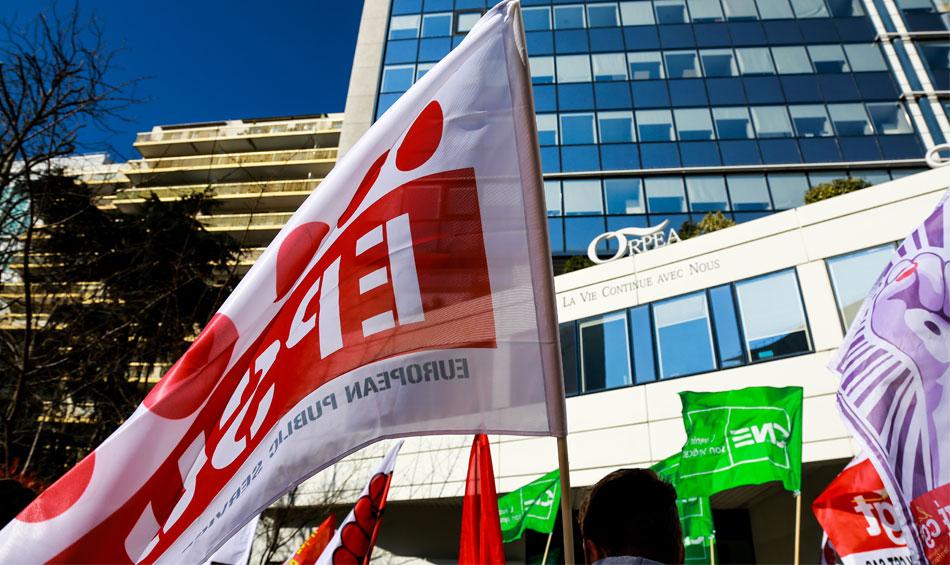 (18 May 2022) ORPEA’s long anticipated financial reports have confirmed the long-held concerns of French unions and CICTAR.

The for-profit care giant’s annual accounts were due in March of 2022 but were delayed by the fallout of the book ‘Les fossoyeurs’, an exposé into France’s for-profit long-term care system that saw the company come under fire from both policymakers and shareholders. The report was finally published on Friday, 13 May; confirming several concerns laid out in research by the Centre for International Corporate Tax Accountability and Research (CICTAR) as well as EPSU affiliate unions CGT Santé Action Sociale and CFDT Sociaux-Santé.

The annual accounts confirmed the claims made in a February report that the ORPEA Group is building a vast network of investment properties. The accounts confirmed that the company had expanded their property portfolio by 20% since 2020, now valued at €8.2 billion. Property sales generated €284 million for the group in 2020. The accounts also noted a sum of €53 million in public funding that was not used for intended purposes – to support the wellbeing of workers and residents.

While the group’s property portfolio grew in 2020, so did their debt. The company’s debt rose by 20%, totalling €7.8 billion. Profits had already fallen from 2020’s €160 million to €65.2 million in 2021, with stocks plummeting in the wake of the ‘Les Fossoyeurs’ scandal. While the company has paused paying dividends to shareholders, EPSU affiliate unions CGT Santé Action Sociale and CFDT Sociaux-Santé point out that the company cannot continue to do the same for workers. French workers have not seen any meaningful pay rises since 2001 – and this stagnation has come at the benefit of shareholders and high-paid management.

Investigate Europe has also revealed that the company has been using an obscure holding in Luxembourg to shift assets and circumvent tax rules. The parallel company, named ‘Limpany’, has been used to cover up secret payments in France and cheat Italian VAT rules by transferring ownerships through the holding. While ORPEA has filed a complaint against an unknown ‘person X’ relating to misuse of corporate assets, this is insufficient for a company that has treated public funding with such a lack of transparency. Indeed, CICTAR research shows that ORPEA has been gradually reducing the disclosure of ‘offshore’ companies, with several disappearing from public reports and accounts since 2015.

While the company has claimed their intent to clean up their act financially – and even declared that they are starting “to consider the transformation of ORPEA into a ‘entreprise à mission’” - there is no evidence of such improvement thus far. The group has done nothing to address the complaints of trade unions or to withdraw court cases against them. ORPEA cannot continue to whitewash their misdeeds with empty promises – and they cannot use their ongoing woes to justify poor treatment of workers. As workers and residents continue to suffer from the company’s questionable priorities, EPSU and its affiliate unions will continue to hold the company accountable and fight for real change.

(July 2016) Unions at the Orpea care company used the group's annual shareholders' meeting to raise concerns about pay and conditions and health and safety. The unions highlighted the fact that Orpea's profits have soared while workers have seen no pay rise since 2013, have to deal with excessive workloads and are more likely to be on fixed-term rather than permanent contracts. The union demands were directed at both management and shareholders, calling on the company to take on more staff, improve working conditions and ensure a high quality service. Read the statement at CGT (FR) and CFDT