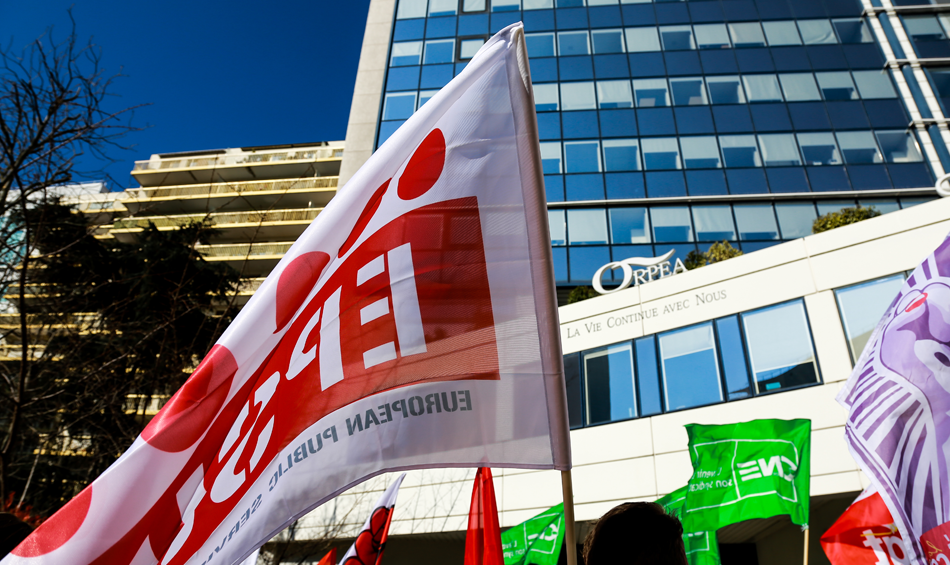 (Press Release, Brussels, 23 March 2022) The Bremen Bremerhaven labour court yesterday found that a German subsidiary of the Orpea Group subjected the chair of their works council and European Works Council (EWC) to a sustained campaign of anti-union ‘bullying’ over the past year.

Nicole Meyer faced Senioren Wohnpark Weser in court on Tuesday, 22 March 22 after a year of continued threats and abuse: continuously referring to Meyer and her Deputy Chair as ‘pigs’; barring them from entering their place of work; depriving her of vacation time and repeatedly threatening to dismiss her without notice.

One such threat came after Meyer attended a demo in front of Orpea headquarters in Paris, organised by CGT Santé Action Sociale with the support of CDFT Sante Sociaux, FO Santé and large delegations of Belgian unions CNE and Setca. On her return, she received a letter from the employer threatening dismissal, claiming that the participation in the demo is not compatible with the work in the works council. With the support of the European Federation of Public Service Unions (EPSU) and CGT this threat was withdrawn, but the letter served as another example of Orpea’s illegal anti-union actions.

After suing Senioren Wohnpark Weser and its managing director for pain, suffering and damages, the Orpea subsidiary countersued for €150,000 for ‘character assassination’. Bremen Bremerhaven labor court ruled that Senioren Wohnpark Weser must pay €15,000 in damages to Meyer for proven bullying. The court also dismissed the subsidiary’s ‘character assassination’ allegations. This court case came after Bremen Regional Labor Court ruled in February 2022 that the employer's dismissal attempts were unlawful.

The Orpea Group recently came under fire for elder abuse, misuse of public funds and understaffing – to name only a few of the issues raised in Victor Castanet’s bombshell book ‘Les fossoyeurs’ (The Gravediggers). The exposé highlighted the consequences of a care system that prioritises profit over delivering quality care. Share prices plummeted, the CEO was dismissed and a series of investigations were launched in France and Belgium.

Now is the time for Orpea to focus less on harassing its trade union representatives, and instead focus on addressing the poor working conditions detailed in ‘Les fossoyeurs’. The company needs to annul its privileged relationship with an in-house union (Arc-en-Ciel) and engage with the representative unions for the sector to establish a new era of industrial relations. The system of commercialised healthcare is one that has long been criticised by unions, residents and EPSU – consequences that are now being exposed. As the recognised voice of health and other care workers in Europe, EPSU calls on the European Union to prioritise the needs of workers like Nicole Meyer in the forthcoming European Care Strategy – and not those of multinational companies.

Read EPSU’s comment on the book and previous conflicts in Orpea here.

Read Caring for Profit of the European Network of Corporate Observatories’ research on Orpea and other companies here.

Learn more about the global campaign on care as a public service here.

The European Federation of Public Service Unions (EPSU) brings together trade unions from across Europe and represents over 8 million public service workers. It is the most representative European trade union organisation in the social services sector. EPSU works hard to deliver better working conditions, improved health and safety and enhanced rights for its members. By sitting down with employers at European level, we negotiate best practice agreements that improve the working lives of public service workers and ensure quality services for citizens;

For more news on Orpea

The Davar news website reports that last month the Regional Labour Court ordered Tel Aviv University to pay 150,000 shekels (€42,500) to the research laboratory workers’ union in compensation for obstructing its efforts to unionize. The Court said the university tried to fire the chair of the union and dock the salary of another union member. It ordered the university to rescind the dismissal of the union chair, Dr Moti Ronen, and bring him back to work under the same contractual agreements that preceded his dismissal. The university is also required to pay back in full the salary it docked

Bremen is the first regional government in Germany to adopt a law on minimum wages that covers regional government employers as well as organisations funded by the regional government. Organisations will risk losing their funding if they infringe the new law which takes effect from 1 September this year. A Senate committee will review the level of the minimum rate, initially set at €8.50 an hour, every two years. Read more at > DGB (DE)