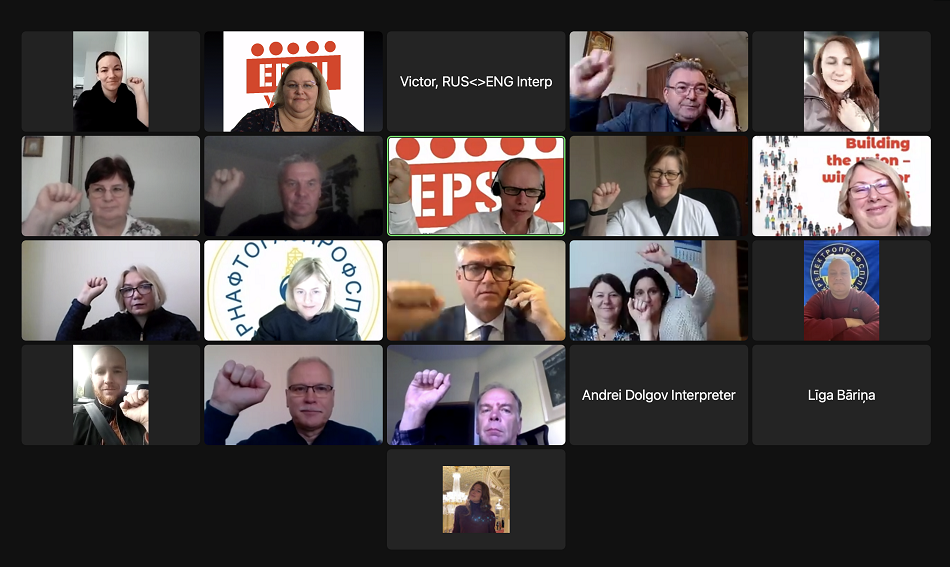 (5 October 2022) The unions listened to the update of the Ukrainian union leaders on how the continued aggression of the Russian Federation is causing devastation in Ukraine. News from recently liberated villages and towns is both positive and gruesome with the discovery of many deaths and torture chambers. The sham elections in the occupied territories were condemned. The update on the situation around the nuclear power plants and the continued oppression of the thousands of staff working there showed the very dangerous situation.

The Latvian health workers union reported on the strike and actions on 27 and 28 September. The workers and the union seek a pay increase to compensate for high inflation and to value workers after the pandemic. Latvia is still experiencing an exodus of workers. Several unions have sent letter of support and solidarity.

Not discussed at the meeting was the situation in Armenia. Several participants experienced network problems. The social and economic situation is very difficult. The hostilities between Azerbaijan and Armenia lead to economic and social problems. Armenia on top experiences an influx of Russian nationals escaping the mobilisation, leading to high prices for real estate in Yerevan amongst others, pushing local workers and families out of the city centre. The same problems are experienced in places like Tbilisi, Georgia.

We agreed the representatives for the different EPSU Congress preparation committees.

Solidarity messages have come in from many unions across Europe. Colleagues from Kosovo, energy workers from the Czech Republic, gas workers from Slovakia, local unions from the Netherlands, gas, nuclear
Energy
Oct. 28, 2005

The vida services union says that urgent action is needed to tackle overwork among midwives. There is a problem of understaffed delivery rooms and increased demands on midwives such as administrative work. The union has taken up the issue in particular at the St.Josef hospital in Vienna where it will be negotiating with management following a meeting of midwives organised by the union. The negotiations will discuss staffing, working time and questions of pay that the union says are crucial to improve recruitment to the job.