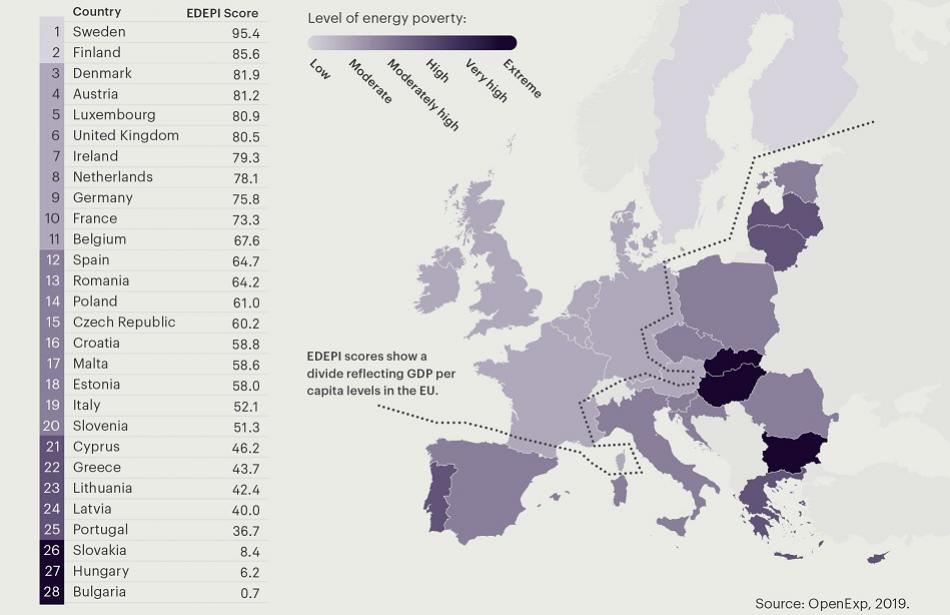 (20 February 2019) A new report on energy poverty has revealed that a majority of EU countries are unable to keep their citizens warm this winter.

The report found that a 17  EU countries  have significant levels of energy poverty.

The share of household expenditure spent on energy is rising in Europe, with increases more prominent in low-income families – whose expenditure increased 33% between 2000 and 2014. A very clear divide exists between northern/western and southern/eastern European countries in which socio economic factors play a more significant role in energy poverty than weather.

After a two-year negotiation process during which new provisions were won for energy poverty alleviation in the EU energy package, the lack of political ambition to tackle energy poverty is nevertheless still visible: Greece was the only EU Member State to have included an energy poverty objective in draft National Energy and Climate Plans; whereas national energy efficiency targets, a structural solution to energy poverty, also fail to reach the insufficient EU target of 32.5% by 2030.

EPSU as a member of the right to energy coalition calls for:

For the report: Power to the people: upholding the right to clean, affordable energy for all in the EU

Lobbying on 'winter package' for a democractic and transparent energy market

(26 June 2017) In November 2016, the European Commission presented the "Clean Energy for all Europeans" package. The proposed Regulation on the internal market in electricity (recast), contains numerous new
Energy
Oct. 24, 2011

The Impact of Global Warming on Europe's Public Services

Based on current scenarios of the International Panel on Climate Change, average global temperature will likely rise with 2 degrees if we can achieve drastic CO2 cuts in 2100.
Energy
Environment/Climate Change
May. 03, 2012

[European Commissioner for Climate Action-&gt;http://ec.europa.eu/climateaction/index_en.htm], Connie Hedegaard addressed the EPSU Executive Committee on 24 April 2012. EPSU had invited the Commissioner to discuss the impact of climate change on public