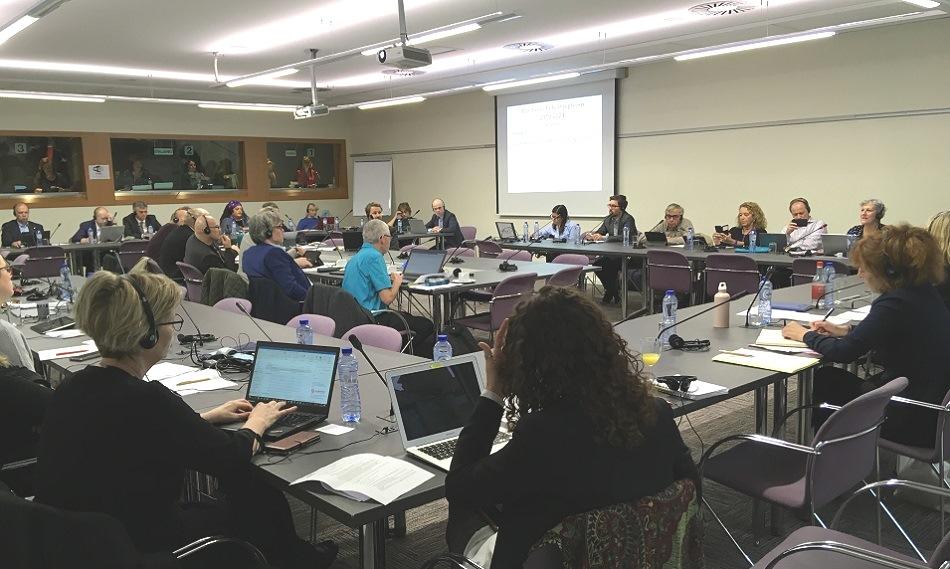 (18 October 2019) On 15 October, EPSU held its biannual NEA Standing Committee which brought together 35 trade union representatives from 20 European countries and various EU institutions. Following the EPSU Congress held this June in Dublin, and in line with the gender parity principle, the Committee elected a new presidential team to lead its work for the next five years: Marco Ouwehand, former vice-president, (FNV, Netherlands)  as president,  and Karin Brunzell (ST, Sweden), Carolina Frias Ortiz (FSC-CCOO, Spain), and Alain Parisot (UNSA, France) as vice-presidents. EPSU Congratulates each member of the new presidential team and looks forward to the next five years under their leadership! The committee also thanked outgoing President Britta Lejon, from Sweden, and Vice-President Nicoletta Grieco, from Italy, for their outstanding work.

Top of the Committee’s agenda was the pending court case on the Information and Consultation Rights’ Social Partner Agreement. The judgment, the content of which remains a big unknown, will be delivered on Thursday 24 October at the Court of Justice of the EU’s General Court in Luxembourg. The Committee reiterated the implications for the future of the EU social dialogue as well as workers’ rights to information and consultation, including on matters of restructuring in central governments. Following the announcement of the judgment, EPSU will send a press release regarding the decision to affiliates for dissemination at national level. The next steps will be decided at the EPSU Executive Committee on 5-6 November in light of the judgment.

The SC adopted the Work Programme 2019-2024, after an in depth discussion of certain topics. The Committee will continue their activities to promote social justice, and an EU fundamental right to good administration, and democratic, welfare states with space for civic participation and powers for local and regional governments. The work programme is divided into three broad main areas, namely:

The SC welcomed the third report prepared by Lionel Fulton from the Labour Research Department on jobs and working conditions in tax collection services in Europe. Over the past 10 years, 90,110 jobs were cut in EEA countries. As the report states, “there is still a clear need for action on tax, with various reports showing a massive gap between what should be and what is collected.” Clearly the new EU directives aimed at fighting corporate tax avoidance have not been matched by more staffing and resources in EU tax administrations, apart from a few exceptions. The Committee has until the end of October to make final comments before the study is published before the end of the year.

Tom Holvoets, from LBC-NVK/CSC, Belgium, presented the situation of local workers in embassies or diplomatic missions, and recent developments to support, organise, and represent such workers who have found themselves in limbo in terms of workers rights and legal protection. This topic is especially relevant for Belgium, as Brussels is amongst the cities which hosts the largest numbers of embassies and diplomatic missions with frequent cases of reported abuse. The EPSU network of staff in embassies will be updated in order for affiliates to directly report to one another and exchange ways of addressing the particular challenges faced by these workers, and the diplomatic immunity that can, and has been, used by some governments to avoid their responsibilities as employers.

To close the meeting, the SC discussed the latest updates on Brexit and announced the next meeting of the EPSU prison services network on 6 December in Brussels.