(Press Release – 2 December 2015) The new Circular Economy Package announced today is less ambitious than its axed predecessor, with weaker targets and fewer potential jobs. This despite the fact Commission First Vice-President Frans Timmermans promised to “prove us wrong” when he assured “a more ambitious” package was on the way earlier this summer; a claim that has now been rubbished.

General Secretary of the European Federation of Public Service Unions Jan Willem Goudriaan commented: “It is disappointing that the Commission does not go for the full employment potential of the circular economy. With less ambitious targets, come fewer jobs”.

The original Circular Economy Package said it would create €600 billion net savings, two million jobs and deliver 1% GDP growth (1). However it was scrapped under the Commission’s drive for “better regulation” and less red tape. This was after BusinessEurope wrote to Timmermans last year asking for the Circular Economy Package to be killed off. The new proposal has been re-tabled as a purely economic, rather than social and environmental piece of legislation, with the “functioning of the internal market and avoiding obstacles to trade and restrictions of competition within the EU” seemingly the priority of the Commission.
Although there is a significant potential for green jobs, an analysis from the Green Alliance (2) outlines how the new package may create fewer jobs than its 2014 predecessor. The research shows that a more ambitious package could have created around 335,000 net new jobs in Italy, Poland, Germany and the UK; but today’s announcement will instead mean that 110,000 fewer new jobs are created.

“We welcome the Commission’s recognition that the transition to a circular economy will require a qualified workforce and social dialogue,” said Mr Goudriaan. However, he regretted the fact “that there are no concrete proposals to protect workers from low-skilled and low-wage employment with poor health and safety standards”.

He warned against further support for public-private partnerships. “Based on EPSU’s experience and research (3), PPPs risk serving to socialize the costs while privatizing the profits,” concluded Mr Goudriaan.

Of notable significance is the absence of any action on resource efficiency and concrete measures to slash Europe’s absolute consumption of natural resources. This is despite the European Parliament having endorsed plans to tackle these areas as part of the relaunched Package in July (4). EPSU will be working with others to strengthen the package and include a robust social chapter in the coming year.

EPSU is the European Federation of Public Service Unions. It is the largest federation of the ETUC and comprises 8 million public service workers from over 265 trade unions; EPSU organises workers in the energy, water and waste sectors, health and social services and local, regional and central government, in all European countries including the EU’s Eastern Neighborhood. EPSU is the recognized regional organization of Public Services International (PSI). For more information please go to: http://www.epsu.org 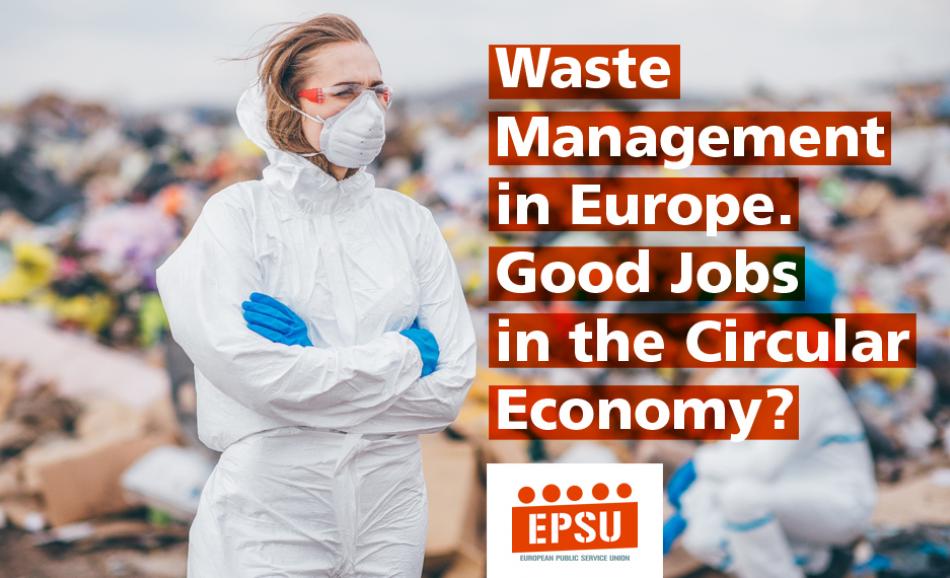 (2 April 2014) At the occasion of the launch of a special report on working conditions in the waste and recycling sector on 27 March, the ETUI organised a conference ‘Green jobs – safe jobs’ for which
Waste
All PoliciesAll Policies