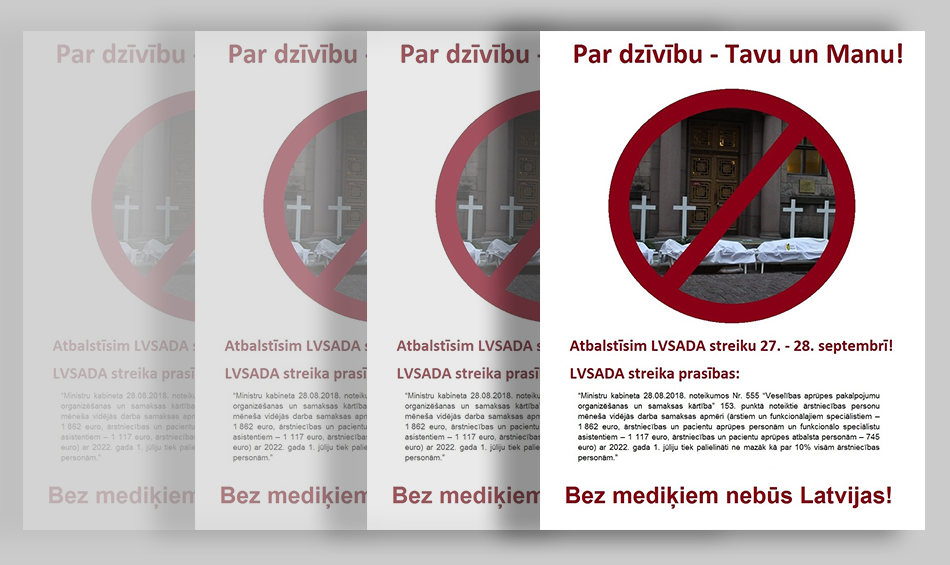 (27 September 2022) Members of the LVSADA health and social care trade union are today involved in their second bout of warning strikes in two months as they put pressure on the government to deliver higher pay across the sector.

The union organised a warning strike on 27 July and said that further action would follow today and tomorrow (27-28 September) if there was no response to the union’s demands. LVSADA is also organising a demonstration today outside of the Cabinet building.

The union has been pushing the government to meet the commitment made in 2017 to increase salaries by this year to €2327 for doctors; to €1396 for nurses, midwives and doctors’ assistants and to €931 for nursing assistants. However, instead of negotiating with the union, the government is proposing to introduce a new pay system which will mean only €2147 for doctors, €1289 for nurses, midwives and physician assistants and €770 for nursing assistants.

LVSADA is particularly concerned about what the new pay system will mean for the lowest paid health workers who will see their pay as a percentage of a doctor’s salary fall from 40% to 29%.

The union is highlighting the problem of staff shortages across the sector and the impact that these are having on the quantity and quality of services to patients. It underlines the fact that both the European Commission and the Organisation for Economic Co-operation and Development have acknowledged the need to tackle understaffing and the importance of improving pay and conditions in attracting and retaining health workers.

EPSU sent a message of solidarity and as of 27 September there were also messages of support from EPSU affiliates in Italy, Bulgaria, Montenegro, Romania, Czech Republic, Germany, Norway, Belgium, and Finland.

The FESAP federation of public service unions, including the SINTAP trade union, has written to the prime minister calling for a state budget in 2023 that would allow for pay increases across the public sector and a wide range of improvements in other employment conditions. Alongside the need to address the scourge of low pay across the public sector, especially for workers with long service, the federation also wants action on career development, precarious contracts and health and safety – all measures it says are necessary to address staff shortages. Meanwhile, the STAL local government

EPSU affiliates in the Czech Republic took part in the national rally organised by the CMKOS confederation calling for an end to cheap labour. The rally marked the latest stage in the campaign begun by CMKOS in 2015 and tying in perfectly with the ETUC pay rise campaign launched in February this year. The confederation says that pay across the country has risen by 10% over the past two years and it is calling for a further increase of 10% for 2018.